Leo Gursky is trying to survive a little bit longer; tapping his radiator each evening to let his upstairs neighbor know he’s still alive, drawing attention to himself at the milk counter of Starbucks. But life wasn’t always like this: sixty years ago, in the Polish village where he was born, Leo fell in love and wrote a book. And although he doesn’t know it, that book also survived: it crossed oceans and generations, and changed lives.

Fourteen-year-old Alma was named after a character in that book. These days she has her hands full keeping track of her little brother Bird (who thinks he might be the Messiah) and taking copious notes in her book, How to Survive in the Wild, Volume Three. But when a mysterious letter arrives in the post she undertakes an adventure to find her namesake, and save her family.

I have always been intrigued with Nicole Krauss’ The History of Love. I don’t know. At first, it was the book’s title that caught my attention. The irst time I encountered the book, I was enamored by anything related to love (it was an episode). Other than the fact that it is included in the 1,001 Books You Must Read Before You Die, the author herself piqued me personally – she is the former wife of Jonathan Safran Foerr, another accomplished author of the Extremely Loud and Incredibly Close acclaim.

What does this book hold? Does it contain the mystery of love that I am hoping it would possess? It wasn’t what I expected it to be.

“Once upon a time there was a boy who loved a girl, and her laughter was a question he wanted to spend his whole life answering.”

Death is knocking on Leo Gursky’s door. Sixty years ago, he successfully evaded it when Adolf Hitler’s evil tentacles were spreading all over Europe. But there is escaping it this time. Alma Singer is a precautious 14-year old. She was named after a character in a book and now she can’t stop thinking about the Alma in the book. Then there is Zvi Litvinoff, Leo Gursky’s friend who is also a Holocaust survivor. He has a secret he has kept for years.

Three different storylines. Three different point of views. Three different characters. But they all converge in a wonderful tale, bound together by a mysterious book. It is a book about a young Polish man’s who fell in love with his childhood friend. The book’s title? The History of Love.

“I want to say somewhere: I’ve tried to be forgiving. And yet. There were times in my life, whole years, when anger got the better of me. Ugliness turned me inside out. There was a certain satisfaction in bitterness. I courted it. It was standing outside, and I invited it in.” ~ Nicole Krauss, The History of Love

Nicole Krauss drew me in to her narrative in a way that I have rarely felt. I got lost in the story, so swept I was that I felt like I was part of the story. It is not just about the nostalgia upon which the story revolved from the onset but it was also from the tenderness of emotions that Krauss tried to provoke from me, from her readers. There is certainly something about the novel that has kept me riveted until the end.

The narrative draws you in with its rotund profoundness. Knitted into the plot are the relatable struggles of the primary characters. Krauss aptly depicted their everyday struggles, their triumphs and their tribulations. There are battles they win and then there are battles they lose. They experience failure and they experience love. They go through a flurry of incidents that remind the readers that they are humans. The human-interest facet of the story made it more appealing.

Nostalgia. The tenderness took me in but it was the overwhelming nostalgia that has aroused several emotions within me. The crests, the troughs that were carefully painted by Krauss showed that survival is not a destination but a journey. Simply put, it is about living one’s life to the fullest. Krauss reminded her readers that living is about stumbling and picking up the pieces. Life is about finding the will to go on, to move forward.

“At the end, all that’s left of you are your possessions. Perhaps that’s why I’ve never been able to throw anything away. Perhaps that’s why I hoarded the world: with the hope that when I died, the sum total of my things would suggest a life larger than the one I lived.” ~ Nicole Krauss, The History of Love

The novel takes it a notch by defying the tenets of time and periodicity. There were references to the Second World War but there was also a strange yet beautiful mix of the present and the past. In Leo and Alma, the dichotomy between generations were shown. More importantly, this highlighted continuity, a subject that was subtly embedded into the tapestry of the story.

The History of Love is not your typical story about love, if it even falls within the purview of romance. It is a book that looks at love on a universal scale, love in all its form. It transcends the basic precepts of love which most romance books have prepped us for. The whole point of the story is about believing that everyone can give parts of ourselves to other people, not just romantic partners but to strangers, to friends, to the harried person we meet on the street every day. It its heart, The History of Love is a book that believes in the power of humanity.

The novel is a triumph of Krauss’ writing prowess. She prudently and sensibly constructed some of the most evoking lines. There was a lyrical quality to her writing that complimented the wonderful nostalgia the story was wrapped in. It was so harmonious. It flowed diaphanously from the start that it wasn’t until the denouement that the flaws begun to demonstrate themselves.

“I try to make a point of being seen. Sometimes when I’m out, I’ll buy a juice even when I’m not thirsty. If the store is crowded I’ll even go so far as dropping change all over the floor, nickels and dimes skidding in every direction. All I want is not to die on a day I went unseen.” ~ Nicole Krauss, The History of Love

Truly, The History of Love isn’t your quotidian book that deals about banalities. It is a book that reminds everyone about the beauty of humanity. The novel’s backbone is built on our yearning to be known and to be loved. It echoes that small voice in our hearts that desires one thing – that we be remembered by those we love. There is so much to the story that I can’t help but think about it weeks after I have read it.

Everything about the novel is superb. Nearly. The backstories, the writing, and the characters all intersected at a crucial juncture. It was all carefully weaved and imagined. For the first few hundred pages, it was pulsating. The intriguing ambiguity the novel was built on fueled my desire to finish the book. But the ending nearly undid all the majestic progress that Krauss judiciously assembled. The ending, for an amazing book, was… mundane. Not only was it mundane, it was perplexing.

Albeit the ending, The History of Love remains one of my most memorable reads. The genuine emotions it evoked placed it on a lofty pedestal that not many books can compare to. This makes me look forward to Krauss’ other works because I’ve read that Krauss has a distinct and mature way of approaching her subject. That says a lot. 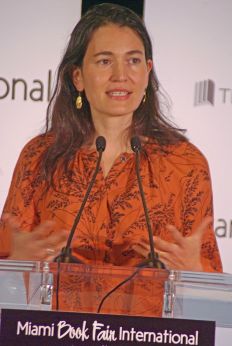 Krauss grew up in Long Island and started writing in her teenage years. Her first works were mostly poems. In 1992, she enrolled in Stanford University, majoring in English. She was an accomplished student, graduating with honors. She took up masters studies at Oxford University after being awarded a Marshall Scholarship. During the second year of her scholarship, she enrolled at the Courtlauld Institute in London, receiving a masters in art history.

Krauss successfully debuted with Man Walks Into A Room (2002), her first published novel. She immediately followed the books success with the publication of The History of Love in 2005. Her other works include Great House (2010) and Forest Dark (2017). She had several of her short stories and poems be published in different magazines and newspapers as well.

She was married to fellow author Jonathan Safran Foer (divorced 2014) with whom she had two children. She currently lives in Brooklyn, New York City.