A couple of days ago, I came across a news feature about a new café that opened. Such features wouldn’t normally pique my interest had it not been for one (very) MAJOR detail: the café’s theme. Guess what is the café’s main theme? Shinee, the Korean boy band that got me into Korean Pop (KPop) music. Even the café’s name reeked of SHINee: Sincerely, Shawol Café.

The opening of the cafe surprised me for one thing: I never thought there were that many Shawols in the Philippines because it is not as mainstream as the popular groups are. I guess I was wrong (very) but still happy.

The article made me want to visit the café, as soon as possible! However, there was one dampener to my plans: the café’s location. It is located in Imus, Cavite. Ugh. Imagine my frustration when I learned this (important) detail. I shelved the idea. Until one day…

I saw a friend posting about the café. Out of curiosity, she dropped by as she found the café’s bright mood very inviting. She is not even a KPop fan! Haha. Envious, I resolved to visit the café even if I have to travel all the way to Imus. I used to visit a client in Dasmarinas three years ago so I am quite confident of my commuting skills.

My stars must have aligned as Vee, a former colleague who lives within the area, volunteered to meet me there. Thankfully, it was a holiday in Cavite. She has been an avid KPop fan for quite some time. My transformation was just recent (May 2018). On a scorching Friday afternoon (March 22, 2019), I was on my way to Imus.

A lot of my friends were surprised (utterly) by my sudden shift of musical taste. I have always been into music (classic, musical, country, you name it) but I have always been averse to KPop. Some of my friends were obsessed with it but I was never able to get past the dyed hairs, the thick eyeliners, the flashy props and the complicated choreographies. At least at first.

My perspective changed due to two pivotal points. The first one was Jonghyun’s death due to depression last December 2017. It was a sad incident that broke my heart but opened my eyes to the realities of the Korean entertainment industry. Watching videos of Shinee made me see how Jonghyun masked his pains through smiles. It was painful because I related to his story. On a bigger picture, his story is everyone’s story.

I still wasn’t into KPop until I had a rough patch myself, a very difficult period for me. I was shocked beyond my system because it was unexpected. The only thing that got through me this trying time was watching videos, yes, of SHINee. In spite of the pall that was hovering over me, their wit and silliness made me see beyond the tumult. This is the primary reason why I love these five dorks to the core. They have become some sort of brothers to me. In a manner of speaking, their music helped to heal me.

Although I have started exploring other groups (there are tons of them), SHINee holds a special place in my heart.

What is a SHINee?

Walking towards the cafe, I can already feel the distinct aura that emanated from the it. It was inviting, drawing us closer to its doors. As the café’s door slid ajar, I can’t help but gush at the intricateness of the café. It is the epitome of an off-the-beaten path spot that you’ll only see if you choose to walk paths unexplored before. It was fancy and everything was stamped with that SHINee glamour. It is a literal shrine for this Korean pop boy band I learned to love.

To the uninitiated, SHINee is a five-member boy group that debuted last May 25, 2008 under SM Entertainment. The group is comprised of Lee Jinki (Onew), Kim Jonghyun, Kim Kibum (Key), Choi Minho, and Lee Taemin. Before hearing of Jonghyun, it was Minho who I first encountered when he guested in The Return of Superman. He always substitutes for Lee Dongguk; his interactions with Sian are always adorable.

Opened last March 10, the café was established by 25-year old Camille Pasao, a true-pearl aqua Shawol. Shawol, a portmanteau of Shinee and World, is the group’s official fandom name. I am multifandom but Shawol is the main group I identify myself with.

I was also impressed with the owner’s Shawol success story. She collected everything that is pearl aqua in color. She also attended many Shinee concerts abroad, mostly from her own money. I would have loved talking to her but unfortunately, she was out that day. Maybe another reason to go back? You can also talk SHINee with the baristas and waiters, they’re all certified Shawols. 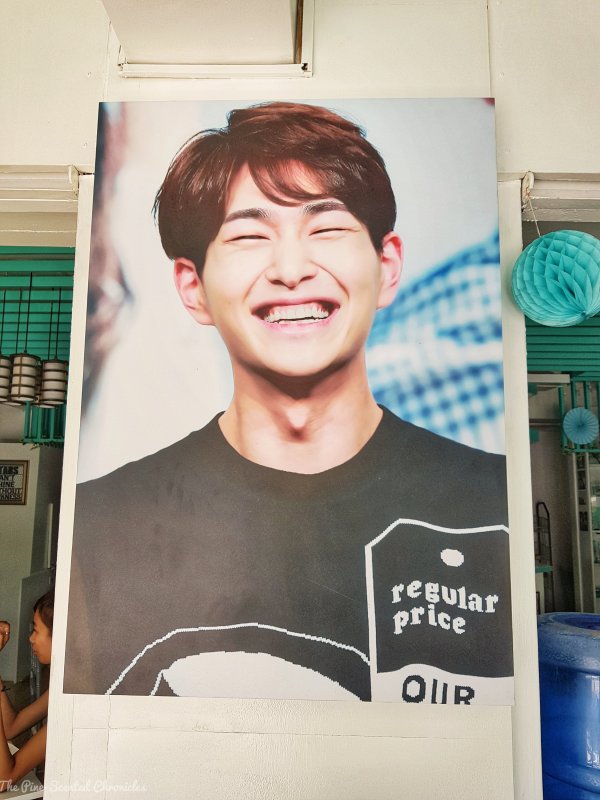 In an interview with KStreet Manila, Pasao mentioned that she opened the cafe because she wanted “to provide a venue for fans to feel at home and share the SHINee love! A café is the best place for it. I may not reach every Shawol in the country now, but someday I hope I reach them all and also share the love.”

Understandably, the prevailing color is pearl aqua, the official color of the group. One side of the café is adorned with the band’s albums, from their first album to their latest (Story of Light). I also saw some of their Japanese albums in display. Other items like chibee dolls and group’s official light stick were used to decorate the place. Huge individual pictures of the members were also hanged up on the wall. At the center of the wall is a flat screen television which, is used to play Shinee music videos and concerts.

Comfort Foods and Everything Kpop

Vee and I individually ordered food. The cafe offers a plethora of food that the owner likes. To those who are not into Korean food, not everything offered is Korean. There were pastries and some pasta. They also serve coffee, Frappuccino and milk teas. To sum it up, they serve comfort food, food you expect to consume while watching a KDrama or simply unwinding.

I ordered jjajangmyeon, or black bean sauce noodles, and latte while Vee ordered winter melon milk tea and nachos. While SHINee songs filled the enclosed space, we caught up and talked about everything under the sun, but mostly on KPop and our work. She quashed a lot of my perceptions. I’ve always thought that she only supports BTS but no, she also listens to a lot of groups like Red Velvet, Super Junior, Big Bang, and of course, SHINee.

When the food was served, I was impressed that the jjajangmyeon was served on a small tin pot. I also tried their red velvet cake. It was moist but I found the filling too buttery; it could have been lighter. The food can use some firming up but I read that the owner is coming up with a set menu to represent each member of the group. Hopefully the next time I drop by the café, these are already available.

Overall, the food was middling. The jjajangmyeon was a bit dry and the winter melon milk tea wasn’t impressive. The taro milk tea, on the other hand, was on point. But hey, the business is just starting, meaning they have a lot of room for improvement and a lot to learn. A friend suggested that the establishment use plates and the cups that are SHINee-themed.

The place is very atmospheric and would suit everyone’s taste, not just Shawols. Non-fans can enjoy the mood, the music, and the food. It is a start up business, and it is my fervent wish that it will grow. Someday, I will go back and hopefully I could get to chat with the owner.

The cafe is open from 11 AM to 9 PM everyday. Expect the crowd to be thicker during the weekends so I advise that you drop by during the weekdays. As of writing, the place has a capacity of 27 seats but the owner plans on expanding. I do recommend the place, especially if you are a SHINee fan. It is a place for you. For non-KPop fans, the place, as a friend pointed out, is very Instagrammable, one good reason to drop by.

To those who want to duplicate the idea, do contact me. I wouldn’t hesitate dropping by your place.

How to get there

8 thoughts on “A Shawol in the City”