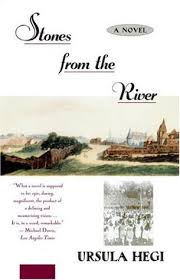 Trudi Montag is a Zwerg – a dwarf – short, undesirable, different, the voice of anyone who has ever tried to fit in. Eventually, she learns that being different is a secret that all humans share – from her mother who flees into madness, to her friend Georg whose parents pretend he’s a girl, to the Jews Trudi harbors in her cellar.

So to begin with, I purchased this book in a used bookstore, without any inkling of what it is about. It is one of those impulse purchases that seem to overcome me whenever I pass by a bookstore. Upon reading the synopsis, my imagination was immediately captured. Moreover, I was captivated by the book cover. The book cover is entrancing and seems to transport me to another era.

There’s always a different kind of elation I feel whenever I read a period piece. These books are like time machines that are capable of transporting the reader to another period. Just like what Salman Rushdie was able to accomplish with Shalimar the Clown, Ursula Hegi’s Stones from the River was able to transport me to another time period with her powerful narrative.

In this novel, Ursula Hegi chronicled the life of Gertrude Montag. Her name was shortened to Trudi to distinguish her from her mother who bore the same name. She was born with dwarfism, hence, the moniker of Zwerg from her peers. Stones from the River is about Trudi’s aspirations, dreams, and frustrations, the biggest of which is her affliction. This difference set her out from her peers even at such a young age.

Acceptance remains the biggest challenge for PWDs because society can be very unforgiving. This was extensively dealt with in the first part of the story, the time when Trudi was growing up. Trudi’s eyes were immediately opened to how how unaccepting society is to people like her. Society sees them as abnormalities, anomalies of nature. But Trudi was undaunted. Even her mother, who left her when she was still a baby, balmed her misshapen body to a “long ago sin so loathsome.”

Trudi tried foolhardily to submit herself to the preconceived notions of what a normal society is, in spite of heartbreaking rejections. Growing up in pre-Nazi Germany, a period when people view disabilities as weaknesses, Trudy strived hard to be accepted by her peers. At school, everyone treated her like a persona non grata and exempted her from any school activity. No one wanted to be her friend. But she didn’t let these setbacks bring her down and instead she doubled her efforts in everything she did. But not even her biggest efforts warmed her to her peers.

But what her peers refuse to understand it that Trudi just wanted to be treated like a normal person, and not just as a “Zwerg”. Like any PWD, she wanted a normal life which is not defined by her disability. She stubbornly tried to show to everyone that she is capable of doing what a normal girl could do. She joined sports. She tried initiating friendships. But over and over again, she got rejected. Her life was filled rejections but she was nonplussed.

Trudi just kept pushing through, living her life as though these things never bothered her. But it did bother her, she just chose not to show it to the world. The moments when she tries to look at her life in perspective when she is alone are just heartbreaking. Beyond her seemingly steely personality is a soft and kind heart that just yearns to be loved and accepted.

Trudi is a compelling character. She was true to what her name represented – Gertrude means “spear of strength” in German. How she overcame every challenge, every frustration and every rejection that came her way is inspiring. Although there were times when she wanted to give up she didn’t let herself be a victim of her own circumstances.

The Oppressors and the Sympathizers

There is a second dimension to the story. Beyond Trudi’s life story, the novel is a masterful piece depicting the everyday life of the 20-year period build up to Adolf Hitler’s Nazi Germany. Before Adolf Hitler, Germany is just like any normal country, its citizens toiling to support their daily existence. It makes one gain a better perspective and insight of Germany. Hegi certainly painted a great picture of Germany.

The masterful narrative didn’t waver even when the story shifted to the war period. Hegi showed how Germany became divided into two during one of the most important periods in history. On one side are the discreet and silent Jewish sympathizers and on the other side are the ostentatious Hitler loyalists. Trudi and her father, whose friends are mostly Jews, helped rally the cause of Jews seeking protection from Nazi oppression. In one instance, Trudi helped a Jew mother and son who were fleeing from the oppressors. This is in spite of the huge consequences when they are caught harboring Jews.

The book was well-written and has an interesting plot. Moreover, it didn’t fail to make me delve into the story. The manner by which Hegi tackled history and disability is compelling although at times I felt like the book was filled with anger. In popular culture, Germans are usually depicted as very rough talkers even when they are calm and collected.

The book also showed how society at large is harsh towards anyone who is different. Such instances are interspersed through out the novel. First, there is Georg, Trudi’s first friend, was called gay because of his long hair which his mother refused to cut. Then there is the oppression of the Jews which Adolf Hitler masterminded when he rose to power, condemning them.

Trudi showed that whatever disability has shouldn’t be an excuse to go after one desires, and that includes love. Trudi was just one simple girl who wanted to be normal, who wanted to have a mother figure after her mother left her and her father. She always blamed her mother’s desertion on herself and on her disability. Beyond Trudi, the book presented the challenges people with disabilities experience like bullying, rejections and abuses. It also showed what they desired for, the normalcy and the acceptance of society.

Overall, Hegi did a magnificent job in dealing about a person with disability’s dreams and aspirations, frustrations and challenges. Moreover, the poignant manner by which she related Trudi’s story really plucked some strings in my heart. She elevated her story-telling to an admirable level and was able to construct a wonderful book.

But what really are the Stones from the River? You have to read the book to understand why “with each stone she added she felt heavier inside.”

Ursula Hegi was born in Dusseldorf, Germany before moving to the United States in 1965. In the United States, she got married and became a naturalized citizen. Before taking into writing, she taught creative writing and contemporary literature at Eastern Washington University.

Owing to her internal conflicts with her German heritage, she set her first three books in United States. For her fourth book, she decided to explore more of her German heritage. She used Germany again as the setting for her succeeding works, including her bestselling work, Stones from the River. She has also written numerous book reviews for the New York Times, the Los Angeles Times and the Washington Post.

She is currently an instructor in the MFA program of the State University of New York Stony Brook Southampton.

One thought on “Book Review # 6: Stones from the River”