A Little Life follows four college classmates – broke, adrift, and buoyed only by their friendship and ambition – as they move to New York in search of fame and fortune. While their relationships, which are tinged by addiction, success and pride, deepen over the decades, the men are held together by their devotion to the brilliant, enigmatic Jude, a man scarred by an unspeakable childhood trauma.

A Little Life by Hanya Yanagihara is one of those impulse purchases that I made last year. I have never encountered Yanagihara before although A Little Life is her second book. I just randomly picked up her book on the stacks on other bestsellers because its cover immediately piqued my curiosity.

The first thing that caught my attention is actually its thickness. I like reading long books but the its being both a National Book Award and Man Booker Prize finalist was enough to compel me to buy it. It takes a lot to be shortlisted on either lofty literary award giving body. Unfortunately, the book got buried deep in the heap of books I have yet to read. After including it in my 2017 Top 20 Books To Be Read List, I finally got the time to read it. Here are my thoughts.

A Little Life is one of the books which I am really excited to write about. It is quite lengthy because of the difficult subject matters it dealt with. It is both extensive and perplexing at the same time. It is dark. It is intricate. It is satisfying. Importantly, it is all worth the lengthy read.

The book is about the life of four college – Jude, Willem, Malcolm and JB – classmates facing various challenges in New York City. The story began with the personal history of each of the characters. However, very little was mentioned of Jude’s history. Unlike the other three, he has problem with walking, which he attributes to a car “injury”. Because of his disability, his friends treated him as if he is fragile.

The aspect that I really liked about the book is how extensive it is. Although it dealt with difficult subjects, it is colossal in scope and intricate in highlighting these issues and concerns which ranges from homosexuality to sexual abuse. It is a synthesis of different themes which laid out the foundation to a great read that explores different strata of love, sexuality and friendship.

At first, the story was simply about camaraderie and fraternal love. However, as the characters come of age, so does the emotions and the story. With the evolution of the characters, their friendship grew stronger, enduring different challenges from petty spats to JB’s addiction and to early career struggles. They had bad times and they had good times, but they stuck with each other until the end.

Another subject that the book extensively dealt with is homosexuality. The sexual orientations of the four characters are interestingly diversified  – one is openly gay, one is discreetly gay, one is straight, and the last one is straight who later became bisexual. Because of this diversity, it is inevitable for the characters to fall in love with each other.

Pedophilia is another difficult subject that the book dealt with. As mentioned, Jude evaded the subject of his limp as the first few hundred pages of the book is riddled with bits and pieces of his history. The reader and the characters are able to guess it, but Yanagihara effectively kept the tenterhook until the middle part of the book where everything finally unraveled – Jude was sexually traded to older men when he was just 10 years old. He was forced to endure abuse by the person he thought he could trust the most.

Jude was later rescued from being a child sex slave. However, he got detained by a psychotic psychiatrist which also tortured him. He was also able to escape it. As a result of the sexual abuses Jude experienced, he turned into a recluse. He refused to speak about his past, even to his friends, and his adoptive parents. It also made him avoid intimacy because he always associated it with his past sex.

The book also dwells on the different psychological aspects. Mixed in among pedophilia and sexual abuse are masochism, depression, and suicide. Most of these subjects were dealt subtly and were confined on Jude.

The book takes the reader into a life of chronic pain as Jude’s search for independence made him cause pain to himself. He got obsessed with slashing razors on his wrists and on more obscure parts of his body. It is his way of freeing himself from his infirmity and from his nightmarish past. These are quite interesting topics that added texture to the book.

The most recurrent theme in the book is sex which is extensively used in the book to the extent that it is close to becoming an erotica. Nearly every significant issue that has been dealt with in the book emanated from sex. This extensive exploration of sex made me cringe at times.

At first, the sexual aspect was tolerable because it is something readers encounter in a lot of books (hello Christian Grey!). However, the more that sex got mixed in the narrative, the more it got overbearing. On stretches, the book was obsessed with sex. The height of this is emphasized when it defined Willem and Jude’s relationship. Sex was the consummation of their relationship.

As varied, and as difficult as the subject matters are, the story focuses on one “little life”, that of Jude’s. He is the centrifugal force that binds all the events together. Although there are things about him that are quite implausible (i.e. he is a great mathematician, a great baker, and a great litigator), what he has gone through and the pain he felt are just among the reasons why readers were able to relate to the him.

One thing that I have noticed is that the story began at Lispenard Street and ended Lispenard Street. This is quite symbolic of how Jude’s story evolved. He began from abandonment to pain and abuse. He then got a small reprieve with his success as a litigator. Unfortunately, he ended at the same point where he began, in abandonment and pain. Some guys just have all the luck.

What is lacking in the book is historical context. There were no references to any event that would have connected it to any specific time period. However, when one becomes so engrossed in the story, the concept of time is of lesser significance. Another thing that is going against the book is its length. There were portions that were overwritten and could have been shortened without compromising the story. With all these said, I am still astounded by Yanagihara’s work.

It took me time to complete the book but this is one of those books that has left a mark on me. The writing is refreshing in spite of the difficult subject matter. I have to laud Yanagihara for doing a great job on a very ambitious and extensive work. This is a book that has left an imprint on me that I need not read it again. And that’s a compliment. This is a read that will never leave your mind.

Recommended for those who love books about friendship and loyalty, those who love to read books that deals on human nature and psychology, those who like reading about homosexuality and those who are looking for a book with a different take on a banal subject. 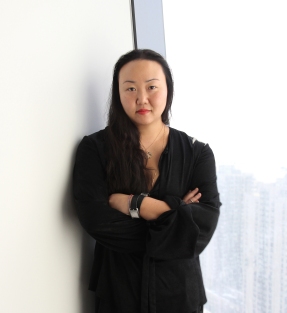 Born in Hawaii, Hanya Yanagihara is a novelist and a travel writer. After graduating from Smith College, she moved to New York City and worked as a publicist. She began writing for Condé Nast Traveler in 2007. She later became an editor of the travel magazine before leaving in 2015. Her stint at Conde Nast paved the way for deputy editorship for T: The New York Times Style Magazine.

The People in the Trees was her first novel. Her second work, A Little Life, which she worked on for 18 months, gained favorable reviews and defied her and her editor’s expectations. A Little Life was later shortlisted for the 2015 Man Booker Prize and was a finalist for the National Book Awards in Fiction.