In my quest to broaden and diversify my reading, I have scoured nearly every nook and cranny of bookstores I have been to. Nonplussed, I also perused the albums of online booksellers, insouciant to the fact that I am already reserving one book after the other. And before I know it, my book collection have grown and grown. Oh my, I guess I’ll be needing extra space now to place my collection. This is the second part of my August 2017 book haul. For the first part, click here.

Title: War and Peace
Author: Leo Tolstoy
Translator: Constance Garnett
Publisher: The Modern Library Classics
Publishing Date: 2002
No. of Pages: 1,386
Synopsis: “Tolstoy’s epic masterpiece intertwines the lives of private and public individuals during the time of the Napoleonic wars and the French invasion of Russia. The fortunes of the Rostovs and the Bolkonskys, of Pierre, Natasha, and Andrei, are intimately connected with the national history that is played out in parallel with their lives. Balls and soirees alternate with councils of war and the machinations of statesmen and generals, scenes of violent battles with everyday human passions in a work whose extraordinary imaginative power has never been surpassed.

The prodigious cast of characters, seem to act and move as if connected by threads of destiny as the novel relentlessly questions ideas of free will, fate, and providence. Yet Tolstoy’s portrayal of marital relations and scenes of domesticity is as truthful and poignant as the grand themes that underlie them.”

Reason why I bought it: “One of the greatest novels,” the foreword began. Enough said.

Title: Thousand Cranes
Author: Yasunari Kawabata
Translator: Edward G. Seidensticker
Publisher: Penguin Classics
Publishing Date: 2011
No. of Pages: 101
Synopsis: “Kikuji has been invited to a tea ceremony by a mistress of his dead father. He is shocked to find there the mistress’s rival and successor, Mrs Ota, and that the ceremony has been awkwardly arranged for him to meet his potential future bride. But he is most shocked to be drawn into a relationship with Mrs Ota – a relationship that will bring only suffering and destruction to all of them”

Reason why I bought it: Kawabata is a Nobel Peace Prize winner for literature whose works I enjoyed because of their brevity and straight-forwardness. Many consider Thousand Cranes as his masterpiece. I have tried looking for this book in different bookstores, to no avail. Luckily, I won my cousin’s birthday raffle. I requested for this book because she is working and living in Japan. Lucky me.

Title: Their Eyes Were Watching God
Author: Zora Neale Hurston
Publisher: Harper Perennial Modern Classics
Publishing Date: 2006
No. of Pages: 193
Synopsis: “One of the most important works of twentieth-century American literature, Zora Neale Hurston’s beloved 1937 classic, Their Eyes Were Watching God, is an enduring Southern love story sparkling with wit, beauty, and heartfelt wisdom. Told in the captivating voice of a woman who refuses to live in sorrow, bitterness, fear, or fooling romantic dreams, it is the story of fair-skinned, fiercely independent Janie Crawford, and her evolving selfhood through three marriages and a life marked by poverty, trials, and purpose. A true literary wonder, Hurston’s masterwork remains as relevant and affecting today as when it was first published – perhaps the most widely read and highly regarded novel in the entire canon of African American literature. ”

Reason why I bought it: This is yet another classic which I always come across on list challenges. It was sold as a bunch with A Tree Grows in Brooklyn.

Title: Sons and Lovers
Author: D.H. Lawrence
Publisher: Oxford University Press
Publishing Date: 1998
No. of Pages: 474
Synopsis: “Lawrence’s first major novel was also the first in the English language to explore ordinary working-class life from the inside. No writer before or since has written so well about the intimacies enforced by a tightly knit mining community and by a family where feelings are never hidden for long. When the marriage between Walter Morel and his sensitive, high-minded wife begins to break down, the bitterness of their frustration seeps into their children’s lives. Their second son, Paul, knows that he must struggle for independence if he is not to repeat his parents’ failure.

Reason why I bought it: D.H. Lawrence is a widely renowned author and his books are often considered classic. I always come across his works on list challenges and my curiosity simply overtook me when I saw a copy of this book on a secondhand bookstore.

Title: A Tree Grows in Brooklyn
Author: Betty Smith
Publisher: Perennial Classics
Publishing Date: 1998
No. of Pages: 483
Synopsis: “The beloved American classic about a young girl’s coming-of-age at the turn of the century, Betty Smith’s A Tree Grows in Brooklyn is a poignant and moving tale filled with compassion and cruelty, laughter and heartache, crowded with life and people and incident. The story of young, sensitive, and idealistic Francie Nolan and her bittersweet formative years in the slums of Williamsburg has enchanted and inspired millions of readers for more than sixty years. By turns overwhelming, sublime, heartbreaking, and uplifting, the daily experiences of the unforgettable Nolans are raw with honesty and tenderly threaded with family connectedness — in a work of literary art that brilliantly captures a unique time and place as well as incredibly rich moments of universal experience.”

Reason why I bought it: A Tree Grows in Brooklyn is yet another book that I have never heard of until I began doing list challenges. The title immediately caught my eyes although I didn’t have any idea on what the story is about. When I saw a Facebook friend sell a secondhand copy, I didn’t hesitate in purchasing it. 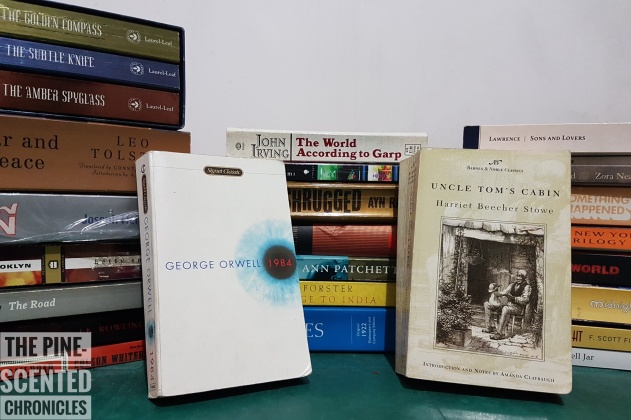 Title: 1984
Author: George Orwell
Publisher: Signet Classic
Publishing Date: July 1950
No. of Pages: 312
Synopsis: “1984 has come and gone, but George Orwell’s prophetic, nightmarish vision in 1949 of the world we were becoming is timelier than ever. 1984 is still the great modern classic of “negative utopia” – a startlingly original and haunting novel that creates an imaginary world that is completely convincing, from the first sentence to the last four words. No one can deny the novel’s hold on the imaginations of whole generations, or the power of its admonitions – a power that seems to grow, not lessen, with the passage of time.”

Reason why I bought it: I first came across this book when I was reading Haruki Murakami’s 1Q84. I barely had any idea then what it was about until I keep encountering it in list challenges. Dystopian fiction was never my cup of tea that’s why I kept myself from purchasing it. However, when I came across it on a secondhand bookstore, I just simply can’t resist the temptation.

Title: Uncle Tom’s Cabin
Author: Harriett Beecher Stowe
Publisher: Barnes & Noble Classics
Publishing Date: 2003
No. of Pages: 515
Synopsis: “The narrative drive of Stowe’s classic novel is often overlooked in the heat of the controversies surrounding its anti-slavery sentiments. In fact, it is a compelling adventure story with richly drawn characters and has earned a place in both literary and American history. Stowe’s puritanical religious beliefs show up in the novel’s final, overarching theme—the exploration of the nature of Christianity and how Christian theology is fundamentally incompatible with slavery.“

Reason why I bought it: I always associate Uncle Tom’s Cabin to Jose Rizal because according to Philippine history books, Beecher Stowe’s classic is Rizal’s inspiration for his works, Noli Me Tangere and El Filibusterismo. I’ve never been a fan of classics but maybe it is time to challenge myself further.

Title: Something Happened
Author: Joseph Heller
Publisher: Black Swan Book
Publishing Date: 1993
No. of Pages: 559
Synopsis: “Bob Slocum was a promising executing. He had an attractive wife, three children, a nice house, and as many mistresses as he desired. His life was settled… ordered… he’d conformed and society demanded he be happy – or at least pretend to be. But the pretence was becoming more and more difficult, as Slocum’s discontent grew into an overwhelming sense of desolation, frustration and fear. And then SOMETHING HAPPENED.”

Reason why I bought it: I bought this book only because of what was written on the cover. According to book critics, this is a better book than Catch-22. Catch-22, a post-wartime classic, is the only Heller book that I have heard of.

Title: Catch-22
Author: Joseph Heller
Publisher: Vintage
Publishing Date: 1994
No. of Pages: 519
Synopsis: “At the heart of Catch-22 resides the incomparable, malingering bombardier, Yossarian, a hero endlessly inventive in his schemes to save his skin from the horrible chances of war.

His problem is Colonel Cathcart, who keeps raising the number of missions the men must fly to complete their service. Yet if Yossarian makes any attempts to excuse himself from the perilous missions that he’s committed to flying, he’s trapped by the Great Loyalty Oath Crusade, the bureaucratic rule from which the book takes its title: a man is considered insane if he willingly continues to fly dangerous combat missions, but if he makes the necessary formal request to be relieved of such missions, the very act of making the request proves that he’s sane and therefore, ineligible to be relieved.”

Reason why I bought it: I am no fan of war stories but Catch-22 keeps popping out in list challenges that I have done. I decided then to make an exception and delve into this classic. Fortunately, I was able to avail a copy through an online bookseller.

And thus ends my August 2017 book haul. How about you, what books have you purchased in August? Are these books part of your reading list? I hope I can hear from you as well. To more exciting reads!