At a Hallowe’en party, Joyce – a hostile thirteen-year-old – boasts that she once witnessed a murder. When no one believes her, she storms off home. But within hours her body is found, still in the house, drowned in an apple-bobbing tub.

That night, Hercule Poirot is called in to find the “evil presence”. But first he must establish whether he is looking for a murderer or a double-murderer…

It is uncharacteristic of me to begin any review expressing my disappointment. Ever since reading Murder in the Orient Express, I was instantly converted into a devout fan of Agatha Christie. Back then, I was on an impasse vis-à-vis reading mystery novels. The books I’ve been reading became too predictable. However, Christie renewed my faith in the genre. As a result, I kept gushing on Christie’s works.

Unfortunately, Hallowe’en Party is a travesty in ways more than one.

The book relates the murder of a thirteen-year-old girl, Joyce, whose lifeless remains were found a couple of hours after attending a Halloween party. There was very little clue as to why she ended up dead except for one “tiny” detail that happened during the party. When she learned Mrs. Ariadne Oliver, one of the guests, is a famous mystery writer, Joyce bragged about witnessing a murder a couple of years ago. A liar, her claims were immediately discounted by everyone who came within earshot of her claim.

The locals immediately believed that “evil spirits” punished Joyce for her lies, but Mrs. Oliver doesn’t think so. To get to the bottom of this murder, she contacted her good old friend, Hercule Poirot. Methodically and logically, he blew the case wide open.

What is wrong with the novel can already be gleaned at the beginning. The story started very slowly while Christie poured in many irrelevant details. These litany of unnecessary details gave off a lack of direction, Christie unsure on how proceed with the story. Even the crime itself was unspectacular. The only thing that created a ripple in the calmness of mediocrity of the book is Christie’s iteration of how much Greeks love beauty, or how Greece is equated with beauty.

Nonetheless, as a mystery and crime novel, the book is a fine. Agatha Christie did enough to keep readers hooked to the suspense. However, the story is stuck midway between mediocrity and brilliance. The plot is too predictable and identifying the perpetrators is an easy task, especially for those who have read a lot of mystery novels. The story’s straightforwardness and complexity makes it easier to discern. Mayhap, this simplicity is the story’s ultimate undoing.

Hercule Poirot, the post-Victorian Sherlock Holmes, is as brilliant as ever. If there is something the book didn’t fail in is the consistency on Poirot’s characterization. The manner in which he solves mysteries differs greatly from Miss Marple, Christie’s other primary fictional crime-solver. His reclusive demeanor adds a whole texture of mystery to Christie’s works.

I am a very big fan of Dame Agatha Christie. Although this work won’t unmake the legacy that Christie forged for herself, I still want to give everyone a caveat – if you want to start your Agatha Christie experience, please don’t start it with this. Hallowe’en Party is the stereotype of the basic mystery novels but it doesn’t fully showcase Christie’s talent. Christie’s approach is neither predictable nor formulaic. It is just that amongst brilliant works are some lackadaisical works.

If you are looking for your first Agatha Christie experience, I recommend any of the following:

1) Murder in the Orient Express

2) And Then There Were None

3) The Murder of Roger Ackroyd 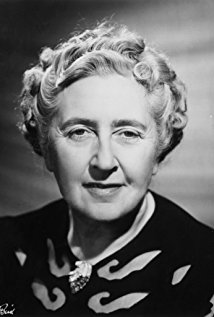 (Photo by IMBD.com) Agatha Christie is definitely one, if not the most renowned crime novel writer of all times. Her books sold over 2 billion copies worldwide, outsold only by the Bible and William Shakespeare.

Dame Agatha Mary Clarissa Christie was born on September 15, 1890 in Torquay, Devon to an affluent upper-middle class family. Before embarking on a career of writing, she served in a Devon hospital. When she began writing, she experienced six rejections until The Bodley Head finally published The Mysterious Affair at Styles in 1920 which starred the little Belgian detective that could, Hercule Poirot.

The Muder of Roger Ackroyd is widely touted by literary pundits as Christie’s magnus opus. However, And Then There Were None is her best-selling work and also the world’s best-selling mystery novel ever. Agatha Christie is also the most widely published author of all time and in any language. Her 86 novels have been translated into at least 103 languages.