Through 63 books, I was able to cull numerous memorable quotes and lines from a wide range of themes and subjects such as death, love, finding one’s self, dealing with grief, and ultimately, life. From these hundreds of memorable lines and quotes, I have rounded up some of the most thought-provoking and memorable quotations. Since there are too many memorable lines from the year, I am sharing 36 lines in total in two installments of 18 each. This is the first installment; for the second part, you can click on the link provided above. 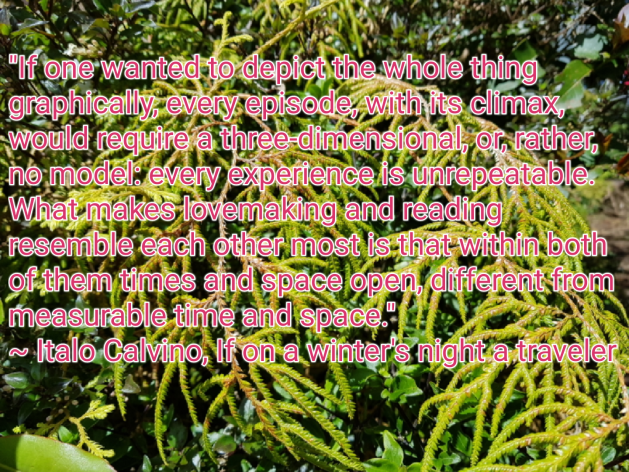 “If one wanted to depict the whole thing graphically, every episode, with its climax, would require a three dimensional, or, rather, no model: every experience is unrepeatable. What makes lovemaking and reading resemble each other most is that within both of them times and space open, different from measurable time and space.” ~ Italo Calvino, If on a winter’s night a traveler 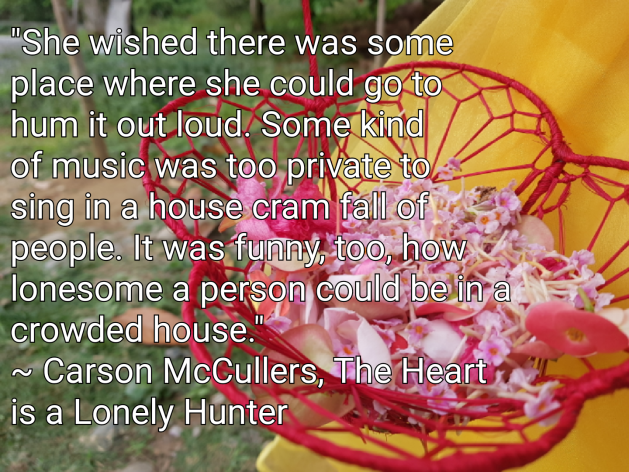 “She wished there was some place where she could go to hum it out loud. Some kind of music was too private to sing in a house cram fall of people. It was funny, too, how lonesome a person could be in a crowded house.” ~ Carson McCullers, The Heart is a Lonely Hunter 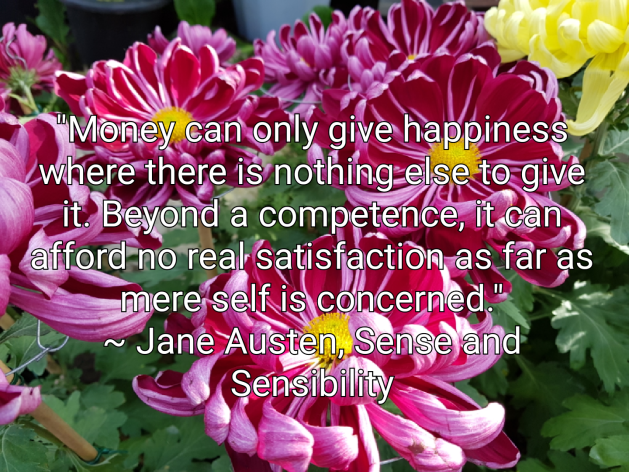 “Money can only give happiness where there is nothing else to give it. Beyond a competence, it can afford no real satisfaction as far as mere self is concerned.” ~ Jane Austen, Sense and Sensibility 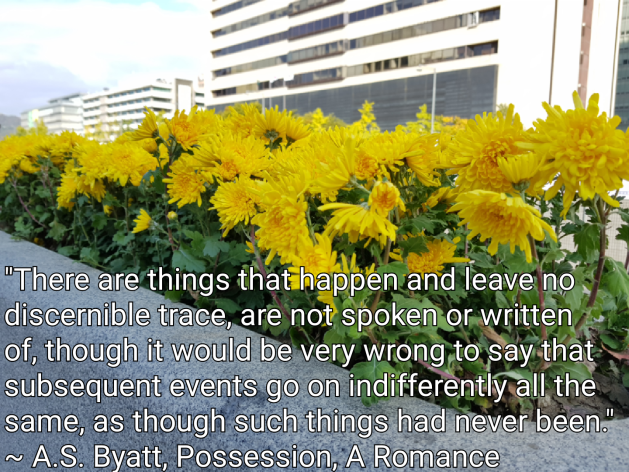 “There are things that happen and leave no discernible trace, are not spoken or written of, though it would be very wrong to say that subsequent events go on indifferently all the same, as though such things had never been.” ~ A.S. Byatt, Possession 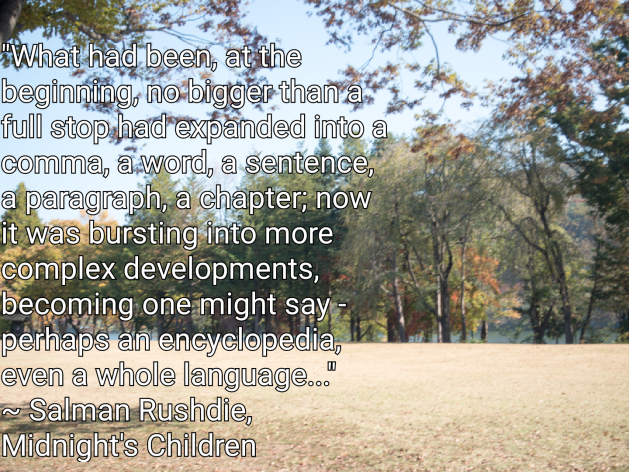 “What had been, at the beginning, no bigger than a full sop had expanded into a comma, a word, a sentence, a paragraph, a chapter; now it was bursting into more complex developments, becoming one might say – perhaps an encyclopedia, even a whole language…” ~ Salman Rushdie, Midnight’s Children 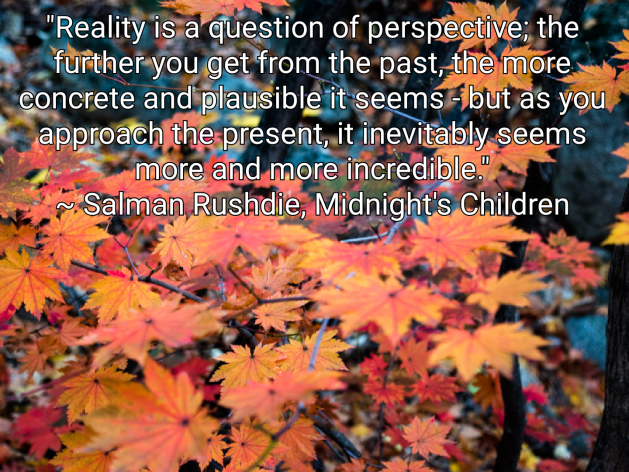 “Reality is a question of perspective; the further you get from the past, the more concrete and plausible it seems – but as you approach the present, it inevitably seems more and more incredible.” ~ Salman Rushdie, Midnight’s Children “Memory’s truth, because memory has its own special kind. It selects, eliminates, alters, exaggerates, minimizes, glorifies, and vilifies also, but in the end it creates its own reality, its heterogeneous but usually coherent version of events; and no sane human being ever trusts someone else’s version more than his own.” ~ Salman Rushdie, Midnight’s Children 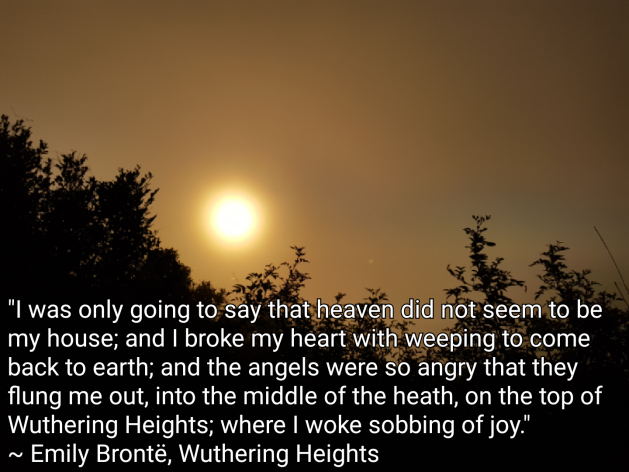 “I was only going to say that heaven did not seem to be my house; and I broke my heart with weeping to come back to earth; and the angels were so angry that they flung me out, into the middle of the heath, on the top of Wuthering Heights; where I woke sobbing of joy.” ~ Emily Brontë, Wuthering Heights 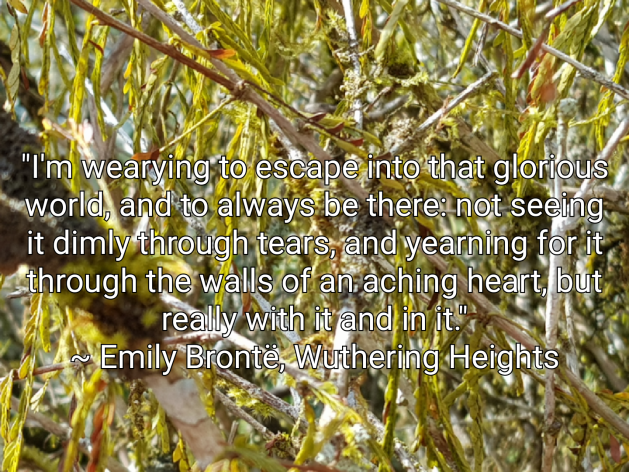 “I’m wearying to escape into that glorious world, and to always be there: not seeing it dimly through tears, and yearning for it through the walls of an aching heart, but really with it and in it.” ~ Emily Brontë, Wuthering Heights 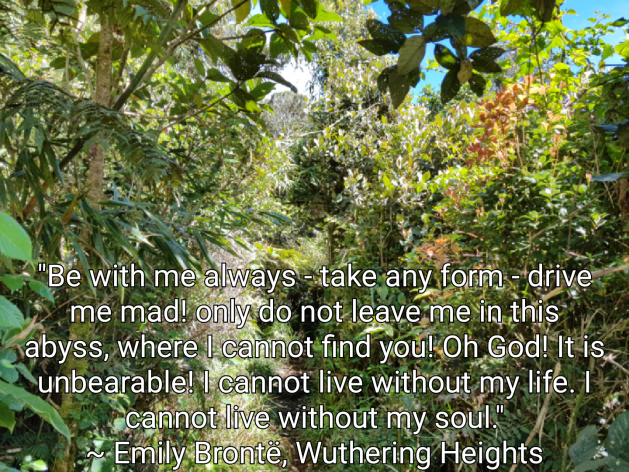 “Time moves funny and it’s hard to pin down. Occasionally, time offers you a hundred opportunities to do the right thing. Sometimes, it only gives you once chance.” ~ Pat Conroy, South of Broad 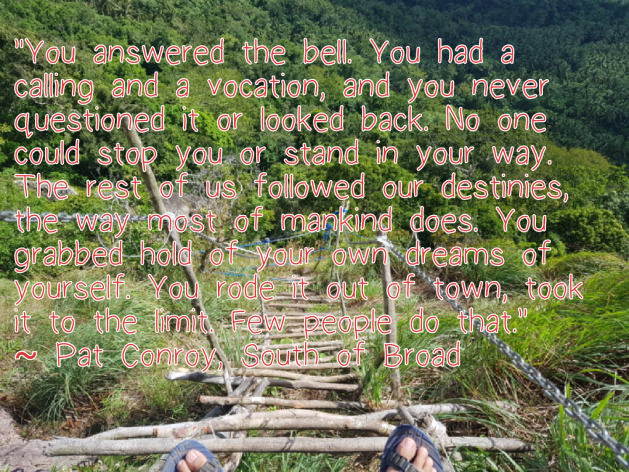 “You answered the bell. You had a calling and a vocation, and you never questioned it or looked back. No one could stop you or stand in your way. The rest of us followed our destinies, the way most of mankind does. You grabbed hold of your own dreams of yourself. You rode it out of town, took it to the limit. Few people do that.” ~ Pat Conroy, South of Broad 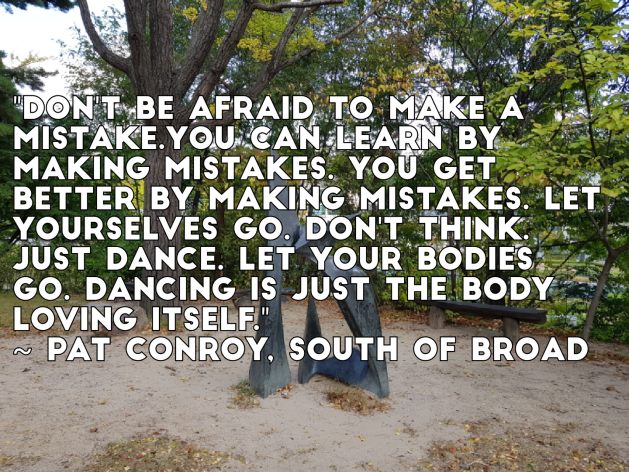 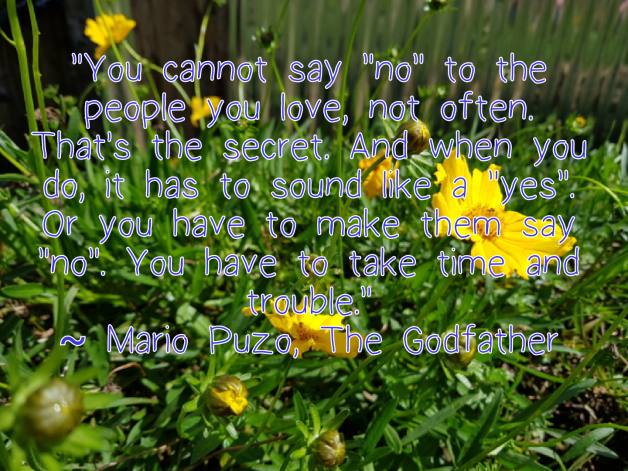 “You cannot say “no” to the people you love, not often. That’s the secret. And when you do, it has to sound like a “yes”. Or you have to make them say “no”. You have to take time and trouble.” ~ Mario Puzo, The Godfather 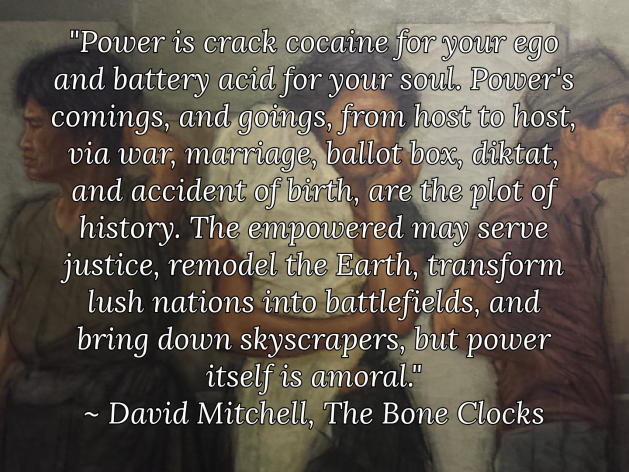 “Power is crack cocaine for your ego and battery acid for your soul. Power’s comings, and goings, from host to host, via war, marriage, ballot box, diktat, and accident of birth, are the plot of history. The empowered may serve justice, remodel the Earth, transform lush nations into battlefields, and bring down skyscrapers, but power itself is amoral.” ~ David Mitchell, The Bone Clocks 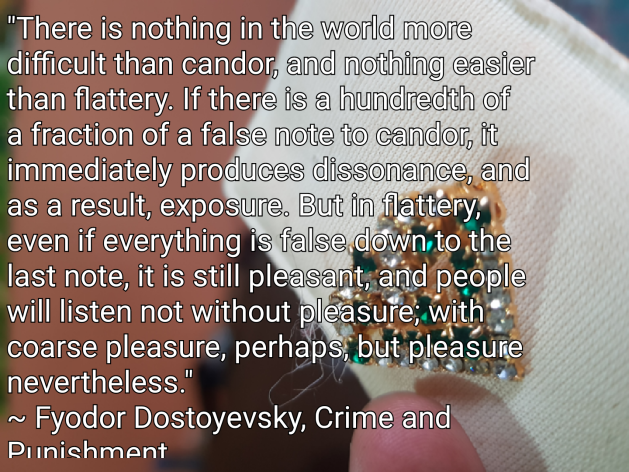 “There is nothing in the world more difficult than candor, and nothing easier than flattery. If there is a hundredth of a fraction of a false note to candor, it immediately produces dissonance, and as a result, exposure. But in flattery, even if everything is false down to the last note, it is still pleasant, and people will listen not without pleasure; with coarse pleasure, perhaps, but pleasure nevertheless. ” ~ Fyodor Dostoyevsky, Crime and Punishment “What would your good do if evil didn’t exist, and what would the earth look like if all the shadows disappeared? After all, shadows are cast by things and people. Here is the shadow of my sword. But shadows also come from trees and living beings.” ~ Mikhail Bulgakov, The Master and Margarita

This is just the first of two lists. Please do watch out for the second list. Happy reading!