Following our successful conquest of Mt. Pulag, Monica, John and I stayed for one day in the City of Pines. Monica wanted to explore places that she hasn’t been to before. Meanwhile, this is going to be John’s first time in Baguio City. Having been a long-time resident of Baguio, I volunteered myself to organize our city tour.

In commemoration of the EDSA People Power, the day has been declared a national holiday, allowing Monica and John to extend our excursion beyond the weekends. We originally planned to go to Northern Blossom Farm in Atok, Benguet. It entails getting up early the next day but due to sheer exhaustion, we decided not to proceed with the original plan.

So where to first?

Following our original plan (less Northern Blossom Farm), we started with the furthest destination – the La Trinidad’s Strawberry Farm. I was apprehensive at first, I was nonetheless amazed by the extent of farm dedicated to strawberry farming. It is also nearly strawberry season!

However, walking around the farm was exhausting. The heat was unbearable, too. We had to buy “dirty” strawberry ice cream to cool us down from the heat. Before heading to our next destination, we first had our lunch at a famed local haunt, Calajo Restaurant. Calajo is the Ibaloi term for let’s eat (or somewhat “Bon Appetit”).

Read more about our adventures in La Trinidad’s Strawberry Farm by clicking here.

Post-lunch, we proceeded to an emerging destination in La Trinidad. StoBoSa Housing used to be an eyesore, as houses were haphazardly built on the steep slopes of a hill. To reinvigorate the place, Department of Tourism-CAR (DOT-CAR), under its Rev-Bloom Urban Redevelopment Tourism Campaign, came up with an idea – use the entire village as a giant canvass and paint a giant mural.

The overall concept was prepared by a handful of artists from the Tam-awan Artist Village Group. Inspired by Rio de Janeiro’s favelas, the project entailed painting nearly 200 houses. The project was started in February 2016 and was completed seven months later. The main motifs were sunflower and rainbow. Because of its colorful and idyllic location, it didn’t take long for it to develop into a must-visit spot in La Trinidad.

Just like with the strawberry farms, it was also my first time dropping by the area with the sole purpose of being a visitor. A view deck provides a good vantage point for taking pictures. The hanging bridge is also another spot but would be bothersome for local traffic. Before entering the view deck, be sure to register first to monitor visitor traffic. No worries, entrance is free of charge.

At initial glance, the mural looked mundane. But the more you stare at it and visualize it, the colors begin to come alive. The catch: find the hidden sunflower. But why inspired by sunflower? Before there were houses, the area used to be filled with wild sunflowers (or marapait to locals).

Located at the boundary of Baguio City and La Trinidad is an enduring Buddhist Temple, locally referred to as Bell Church. It is within walking distance of StoBoSa so I made sure to include it in our itinerary. Besides, I have fond memories of the place. The last time I was in the temple was when I was barely ten, when my grandfather and I toured my cousins around Baguio City.

Built in the 1960s, the temple is used primarily for spiritual purposes. It is also open for the public; we did witness a number of visitors when we dropped by. During my first visit nearly two decades before, we didn’t have to deal with such a number. No entrance fee is charged, however, one is expected to behave as it is a religious area. Monica, John and I just spent the time there to relax before embarking on the rest of our adventures.

Our next stop was supposed to be Camp John Hay. However, we have to drop by at the city center first to meet my friend to get our bus tickets for our return trip later in the day. Something held her up so we went roaming around in the meantime. From Center Mall, we walked all the way to Burnham Park, one of the enduring symbols of the city. I was reminded that it was John’s first visit to the city.

In Spanish colonial town planning, the church, the town hall and the plaza are built next to ueach other at the heart of the town. The plaza is to be the melting pot where church-goers and locals can go and socialize. Burnham Park is the equivalent of that Spanish melting pot; Baguio was planned and designed by Americans. The park is named is after the architect who drew up the plan for the city, Daniel Burnham.

The Burnham Park of today is a greatly altered version of the one I grew up loving. The staples are still there – the flowers, the bikes, the pine trees. However, one cannot deny the changes that the park has been wrapped in. Rose Garden has become more organized but most of the park has been fenced, too. Other vestiges of change (hello trade fairs) are abound in the park as well.

But still, Burnham Park remains the heart and soul of the city. I saw several locals walking around or just lying down on the grasses, just enjoying the luxury of the holiday. In true tourist fashion, we tried the strawberry taho, and the new offering – ube taho. In contrast to the sweetness of the former, the latter was rather bland, as per Monica. Haha!

After getting the ticket from my friend, we headed to Camp John Hay. I was opposed to the idea of going there because, other than the trees, there wasn’t that much to see in the former American base. In the end, I relented, just to give Monica a chance to use her newest caption.

Camp John Hay, perhaps because of its thick foliage, is very famous for its ghost stories. It was one of the targets of the Japanese during their invasion of the Philippines because the camp is a critical base for the American soldiers. The camp has since then been turned into an economic zone, with several retail stores and hotels built within its limits. Then again, we only have one mission: take a picture with the pine trees.

We found a spot, near Manor Hotel. We went to check first the cemetery of negativity but it was difficult appreciating the puns and the humor because most of the gravestones were dilapidated. Too bad because they do sound amusing. We then went to look for a perfect spot to take that “I’m Pine Thank You” picture. I’ve been convincing Monica all day that there are many places in the city for the said picture but she was insistent. Besides, it was her first time going to Camp John Jay. It was just a quick stop though as because the day is growing deep. 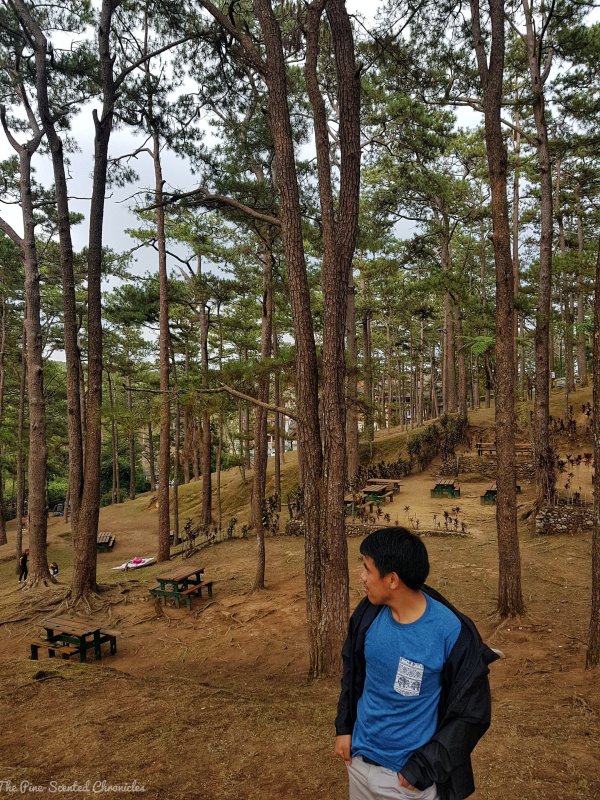 We concluded the day’s adventure at Mines View Park. Just like Burnham Park and Wright Park (in front of the Mansion), Mines View Park is one of the many icons of the city. I have vivid memories of the park as well. It seems that wherever I go in the city, nostalgia would always chase me. I can still remember how raw the park was then, when development didn’t impinge on the crude beauty of the park. Now, the park is filled with stalls and sellers who crowd the way.

It was my grandfather who told us the how the park got its name. From the view deck, one can see numerous mining corporations. At the height of the mining boom, at least six mining operations can be seen from the park, hence “Mines View”. Most of the mountains that can be seen have been heavily mined but measures have been taken to reforest the denuded mountains. These mountains are reminders of the glory days and the consequences of the mining boom. There are still mining operations there but they are not as wide scale as it was forty to fifty years before.

We ended the day by having our final meal before heading back to Manila. Oh Baguio, you never fail to charm me. You surely have a warm spot in my heart. Thank you for giving me, rather, us, fond memories. See you again 😉 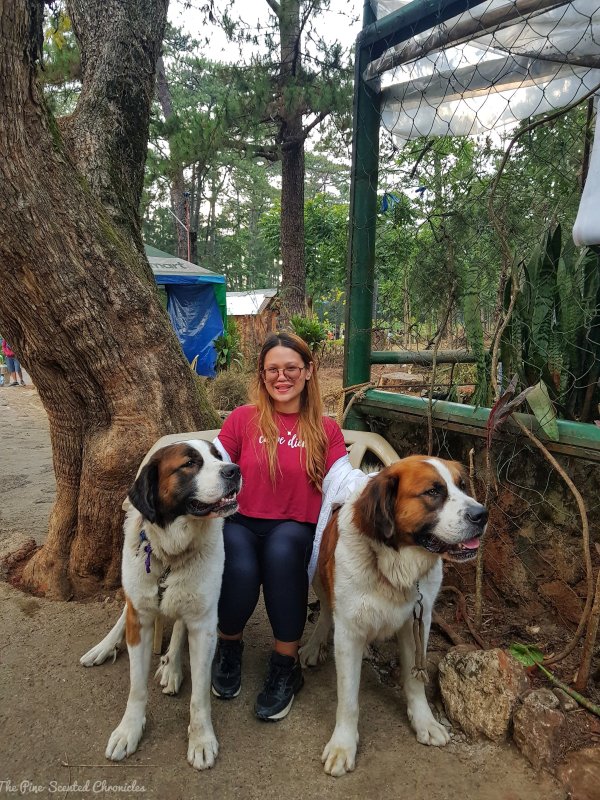