The Bluest Eye is Toni Morrison’s first novel, a book heralded for its richness of language and boldness of vision. Set in the author’s girlhood hometown of Lorain, Ohio, it tells the story of black, eleven-year-old Pecola Breedlove. Pecola prays for her eyes to turn blue so that she will be as beautiful and beloved as all the blond, blue-eyed children in America. In the autumn of 1941, the year the marigolds in the Breedlove’s garden do not bloom, Pecola’s life does change – in painful, devastating ways.

Each of us is yearning for something. Within us is a longing, a deeply-sated desire for one thing that everyone deems impossible. But we get discouraged to pursue these things because society taught us that the impossible is always unreachable. Know your station in life. Know your place in society. These stymies our dreams. These deflates our desires. But in spite of the trials, if we just keep believing, there is a slim chance the impossible becomes possible, even if it comes to a price.

It is post-Great Depression Lorain, Ohio. Toni Morrison’s The Bluest Eye introduces us to eleven-year-old Pecola Breedlove whose father recently burned down their house, causing her to temporarily stay with a foster family, the MacTeers. Her unusual mannerisms and dark complexion drew the ire of her neighborhood and her school community. She was frequently regarded as “ugly”. These hushed remarks resulted to Pecola developing an inferiority complex which fueled her desire to gain blue eyes. For Pecola, blue eyes is representative of “whiteness”, then a standard for the highest form of beauty.

“Along with the idea of romantic love, she was introduced to another – physical beauty. Probably the most destructive ideas in the history of human thought. Both originated in envy, thrived in insecurity, and ended in disillusion.” ~ Toni Morrison, The Bluest Eye

The Blues Eye is Nobel Peace Prize for Literature winner Toni Morrison’s very first novel. It is more meaningful for her as the book was set in her girlhood home. On the surface, the novel extensively explores the depths of our desires, how it is deeply ingrained into our systems. Pecola is just like us. We want something, we yearn for the “impossible” because of the prejudices that society subjects us to.

However, the novel is more than just a novel about obsessive desire. It is a dark tale that was weaved into a single tapestry that vividly depicts the conditions of African-Americans post-Great Depression. The archetype of African-American fiction, The Bluest Eye contains several undertones of racism, far beyond Pecola’s skin. Society is very unforgiving towards things and people that are out of the ordinary. Society may have grown leaps and bounds but despite these exponential developments, the undercurrents of racism are still palpable. It is for this that the novel is still relevant in todays’ era.

The Breedlove’s abject poverty made the family vulnerable to other “forces”. The novel amply portrayed how racism and destitution led to darker subjects and themes. These subjects include child abuse, violence, chronic alcoholism and even rape and teenage pregnancy. It is not just a dark tale, it is a complex web of complicated subjects as well. Through flashbacks, Pecola’s parents’ struggles as African-Americans in a majorly while Anglo-Saxon community were also portrayed.

Buried over several layers of complex themes is one of the novel’s centrifugal points, the portrayal of an African-American girlhood. It is one subject which the author herself admittedly wanted to explore. Through Pecola, Morrison was able to embody the quintessential “black” girlhood, particularly during the time the author herself was growing up. What she spun was a vivid tale that gets stuck in the reader’s memory for its realistic appeal.

“You looked at them and wondered why they were so ugly; you looked closely and could not find the source. Then you realized that it came from conviction, their conviction. It was as though some mysterious all-knowing master had given each one a cloak of ugliness to wear, and they had each accepted it without question.” ~ Toni Morrison, The Bluest Eye

Racism in general was greatly depicted in the novel. However, there was another form of racism that was inculcated into the narrative, a form of racism that is internalized. Even within the realms of her own family home, Pecola experienced racism. Her parents’ attitude towards the ideal beauty contributed to Pecola unconsciously developing a form of racism within her. This internal racism translated into her inferiority complex as beauty is perpetuated to blue eyes, blond hair, and fair skin.

Lest the reader forgets, the novel also embodies the “quintessential” standards of beauty. Moreover, society played a key role in the development of these standards. Blue eyes and blond hair, and ultimately, whiteness, as Pecola perceived it, are the highest forms of beauty. No, they are the definitions of beauty. It is due to these that Pecola yearned for the titular “bluest eye”, even if it pushed her to the brink of insanity.

Toni Morrison’s body of work shone all throughout the narrative. She is a skilled storyteller to say the least, incorporating different literary facets to come up with a compelling read, in spite it being just her first. By switching the perspective between Claudia MacTeer at different stages of her life, Morrison steadied the pace and the growth of the narrative. The presence of a third-person omniscient narrator helped enhance the impact of the reading experience.

Despite the dark and complex subject matters, what Toni Morrison has conjured is a fabulous story about the challenges and trials that African-Americans. Yes, books about racism are clique yada yada yada. However, her perspective and her interpretation is a towering achievement for female African-American writers. Together with Zora Neale-Hurston and Alice Walker, they form a formidable trifecta of imposing writers. I say this because so far, they are the only female African-American writers whose narratives I have come to appreciate.

The Bluest Eye is an exceptional novel about our deepest desires, the prejudices of society and the different standards that emanate from these prejudices. Claudia sensibly concluded the narrative, lamenting that Pecola was used by the whole community, herself included, as some sort of a scape goat to make themselves feel more superior – prettier and happier.

I personally prefer The Bluest Eye over Alice Walker’s A Color Purple because the latter was related in the colloquial. Maybe it was Walker’s dive into authenticity but it made the book a more challenging read. Nevertheless, they are both great reads! 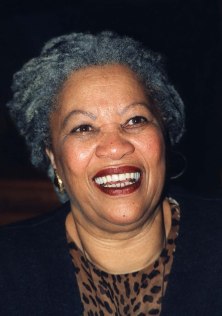 Morrison grew up loving books, with Leo Tolstoy and Jane Austen among her favorite authors. When she was 12, she became a Catholic, taking on the baptismal name of Anthony (after St. Anthony), hence, her nickname “Toni”. Morrison attended the Lorain High School, taking part in the debate team, the yearbook staff and the drama club.

In 1949, Morrison enrolled at Howard University in Washington, D.C. She graduated with a Bachelor of Arts in English in 1953. She earned her Master of Arts at the Cornell University in 1955. Before becoming a full-pledged writer, Morrison spent her early professional career as a professor and later on as an editor for L.W. Singer, a textbook division of Random House.

Morrison’s first published work was The Bluest Eye (1970). It met modest commercial success but was nonetheless followed by the publication of Sula (1973). It was nominated for the National Book Award. It was her third work, Song of Solomon (1977) that brought her national acclaim, winning the National Book Critics Circle Award. Among her other works include the Beloved Trilogy – Beloved, 1987; Jazz, 1992; and Paradise, 1997. The first book of the trilogy won the Pulitzer Prize.

In 1993, Toni Morrison became the first black female to win the Nobel Prize for Literature. She has since then received a bevy of accolades including the  PEN/Saul Bellow Award for Achievement in American Fiction in 2016 and Thomas Jefferson Medal in 2018.