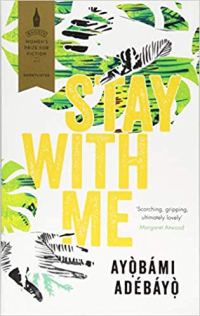 Yejide is hoping for a miracle, for a child. It is all her husband wants, all her mother-in-law wants, and she has tried everything – arduous pilgrimages, medical consultations, appeals to God. But when her relatives insist upon a new wife, it is too much for Yejide to bear. It will lead to jealousy, betrayal and despair.

Unravelling against the social and political turbulence of 1980s Nigeria, Stay With Me sings with the voices, colours, joys and fears of its surroundings. Ayobami Adebayo weaves a devastating story of the fragility of married love, the undoing of family, the wretchedness of grief, and the all-consuming bonds of motherhood. It is a tale about our desperate attempts to save ourselves and those we love from heartbreak.

It’s been another very long week! Whew! I am just so glad I managed to survive it. As it is the last day of the week, it is also time for yet another bookish meme – the First Impression Friday post. For this week’s edition, I’ll be discussing my first impression on my sixth consecutive work by an African author, Nigerian author Ayobami Adebayo’s Stay With Me.

I just recently bought my copy of Stay With Me at the ongoing Big Bad Wolf PH book sale. The title has always fascinated me although I barely had any iota on what it is about. It has such an enchanting allure that I can’t help but be riveted. Moreover, it was recommended to me by three fellow book bloggers.

It wasn’t my original plan to read the book but since it was recommended by trusted sources and I am gaining a badly needed reading momentum, I chose it to be my next reading adventure. And what an adventure it has been so far. Well, not exactly an adventure but I know you get what I mean.

At the onset, I knew I was going to like this novel because of the stable writing. Stay With Me relates the married life of Yejide and Akin. For years, the couple has been trying to conceive a child, but all their attempts were futile. Because of Yejide’s perceived barrenness, Akin’s family have been persuading him to marry a second wife; polygamy is an accepted practice in most African societies. Tired of his family’s tenacious prodding, he finally gave in. What followed is a chain of unexpected and surprising events.

The novel, despite the seeming simplicity, is filled with nuances of African culture, with particular emphasis on marriage and its patriarchal structure. In a spellbinding manner, Adebayo exposes the frailties of marriage, its failures, and its moments of bliss. Yejide and Akin’s story was punctuated by Nigerian historical events which gave it an even more meaningful complexion.

There are numerous moral crossroads in the story. It was this particular facet that kept pulling me towards the story. I was astounded with how Adebayo is craftily involving her readers; rather than making them just mere spectators, she made them part of the story. Being able to weave the readers into the tapestry of the novel is a very rare quality one encounters in novels.

I am nearly done with the book. I sped through it because I am eager to know what happens to Yejide and Akin’s story. Adebayo kept dropping hints as the story progressed, leaving me eagerly wanting answers for all these quandaries. I have set such high expectations on the book and, so far, it has kept up with my expectation. I just need a decent ending. I am already giddy in anticipation.

I hope everyone have a great reading weekend!