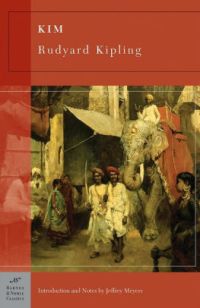 Rudyard Kipling has been attacked for championing British imperialism and celebrated for satirizing it. In fact, he did both. Nowhere does he express his own ambivalence more strongly than in Kim, his rousing adventure novel of a young man of many allegiances.

Kimball O’Hara grows up an orphan in the walled city of Lahore, India. Deeply devoted to an old Tibetan lama, but involved in a secret mission for the British, Kim struggles to weave the strands of his life into a single pattern. Charged with action and suspense, yet profoundly spiritual, Kim vividly expresses the sounds and smells, colors and characters, and opulence and squalor of complex, contradictory India under British rule.

First off, I want to apologize for issuing this First Impression FRIDAY a day late. I’ve been busy at work yesterday, hence, I was unable to find time to make an update. Moreover, I had quite a challenge choosing which book to read next after Akwaeke Emezi’s Freshwater. After eight consecutive works by African authors, I’ve decided to make March my English Literature month. I wanted to start with Charles Dickens’ Bleak House but it was too lengthy so I  next chose Rudyard Kipling’s Kim, which I am previewing in this First Impression Friday (or Saturday) update.

I just started with Kim, my first Rudyard Kipling book, who is probably more renowned for his children’s book, The Jungle Book (yep, of Disney fame). The Jungle Book might be more famous but many a literary pundit have declared Kim as his most important novel; it was also his last published novel.

Most of my understanding of the novel is through the introduction and notes written by Jeffrey Meyers, a famous biographer of famous writers like Ernest Hemingway, Robert Frost and D.H. Lawrence. His painting of the novel, and how it connects with Kipling’s life piqued my curiosity and made me more giddy in anticipation. This is definitely a book I want to devour.

Well, that was how I felt until I started the first chapter. Written in the early 20th century, the writing was a little off. But I guess I am just struggling to adjust as I just came from a stretch of contemporary pieces of work. Nevertheless, it is still too early to create a conclusion or to give a judgment on the book.

The premise, however, is very interesting. Moreover, it does sound as exotic as the country it was set in. I want to know how this novel about British India compare to Kipling’s fellow British E.M. Forster’s A Passage to India, another book that I cherish. I am cognizant that they’re two distinct works and I am not in the business of comparing books. I just want to enjoy the experience.