El Nido, located on the northern tip of the main Palawan island, has been constantly named as the best island in the world by the famed travel magazine Conde Nast. It is no surprise that it is one of every Filipino’s dream destination. So when our friend planned for an excursion to this world-renowned tourist destination, I didn’t even give it a second thought. On a cold February day, my friends and I were on our way to Palawan, Philippine’s last frontier.

It was already dark when Ziv, Voltaire and I arrived in El Nido, enduring a nearly six-hour drive from Palawan’s capital, Puerto Princesa. The quaint town was blanketed by darkness even though it was just barely 8 PM. We later learned from our hosts that there was a power outage, rather a common occurrence. The power outage was just the first of many societal issues that plagued the town. But that is a case for another day so we quickly settled down to the comforts of our bed.

The next day, we were roused by the cockadoodledoo of the roosters, reminding me that I am in a city not my own. Our other companion, Penny has joined us; she arrived late midnight, whilst we were in the midst of our slumber.  Penny was the one who took charge in arranging our tour packages. The tourism office has standardized the packages and pricing across all travel agencies. Visitors can rich from four available packages, labeled from A to D. As our stay was limited, we picked the traditional packages A and B. We’re all raring for some time off so let the wet and wild adventure begin!

From our lodging, we rode a tricycle going to the beachfront where all travelers converged. Most of the attractions in El Nido are far flung islands, hence, the need to travel by motor-powered catamarans. These catamarans are lined up in the beachfront, also prepared to convey the travelers to the islands flanking the bay. At around 8 AM, the adventure commenced. Aboard the catamaran, we were greeted with vivacity and overflowing energy and enthusiasm by our guide who also oriented us on what to expect for the day.

Into the open seas, I can feel my lungs expand wit euphoria. My waning spirit was slowly being lifted by the azure waters and the cerulean skies; such is the good life. The brilliant glow of the the sun and the sky welcomed us at our first stop, the Seven Commando Beach. The sun was still warming the ground up but the fine stretch of white sand was already teeming with activity. Everyone was busy doing some beach-y stuff. Our day was off to a great start.

Our next stop was the small lagoon, just one of many lagoons the area is jotted with. The small lagoon is a small enclosed body of water where one can swim and kayak. To get there, one must enter a small tunnel. When we got there, there was already some sort of kayak traffic as many were attempting to enter the small lagoon. The small lagoon’s azure waters was surrounded by karst limestone formations that is reminiscent of Coron’s Twin Lagoons. Unfortunately, the small lagoon was jam-packed with travelers, most were noticeably of foreign ancestry, mostly Europeans.

After our brief stop at the small lagoon, we proceeded to Shimizu Island to have our lunch. Just like in Coron, the travel packages already covered our lunch. The boats were equipped with mini-stoves where the boat’s crew can cook and prepare our meals. As expected, our lunch was comprised mostly of seafood delicacies. Thankfully, they also prepared some meat meals for individuals like me who are averse to seafood. Everybody was obviously looking forward to the sumptuous meals.

Shimizu Island’s beach is smaller compared to Seven Commando Beach. However, they share the same fine and powdery sand. After a full meal, the azure waters were seductively inviting us to take a dip. There is also a snorkeling area near Shimizu Island. My friends and I just took the time to drink in our new environment – the rock formations, the cool breeze, the cerulean waters, and the overall laidback atmosphere of the island life.

The second half of our adventure commenced with yet another lagoon – the Secret Lagoon. From Shimizu Island, we waded the blue waters to reach yet another island; the bay is jotted with several islands which have their own distinct and interesting characteristic. When we reached the secret lagoon area, our boat anchored for us to get down. As distinct as each island is, they also share a sea of similarities, such as the fine sand, the crystal clear waters and the rock formations.

To access the incognito lagoon, one must enter a very small hole that was carved on the side of the island. The hole can fit only one person, hence, access to the lagoon is regulated; we had to wait for our turn because the lagoon is even smaller than the small lagoon. Once inside, the secret lagoon feels like being inside a silo or a circular tower. The only difference is that the floor is made of water. Do note that the secret lagoon is only accessible during low tides.

Our last stop for the day is the Big Lagoon. You guessed it right. If there is a small lagoon then most definitely there is a big lagoon lying somewhere. The big lagoon is connected with the main bay by a small sandbar which was already covered covered by the sea; it was still shallow to allow amateur swimming. As our boats were anchored off the island, we had to kayak our way to the big lagoon.

The big lagoon, unsurprisingly, is a bigger version of the small lagoon. As it is bigger, it has more than enough space for everyone to explore. Enclosed by tall rock formations, we explored the big lagoon freely. The deep blue leaves so much impression that reminds me of the old adage – silent waters run deep. Underneath the calm is a sea of secrets which is captivating, riveting even. But whatever secrets it hold inside, I am sure not curious enough to dig deep into it. Haha!

We exhausted the rest of our time in the big lagoon, like playful seals thirsting for the sea. We spent our time swimming, kayaking and simply taking pictures of the idyllic spot we were in. Miles away from our responsibilities, we were carefree, basking in this brief respite and this new environment. Our first day was over even before we know it. El Nido is packed with so many secrets that are still waiting to be unlocked. I want to unlock them all. And thus ends our first day in El Nido.

The highlights of Package A:

Here’s some more of our pictures from our first day in El Nido. 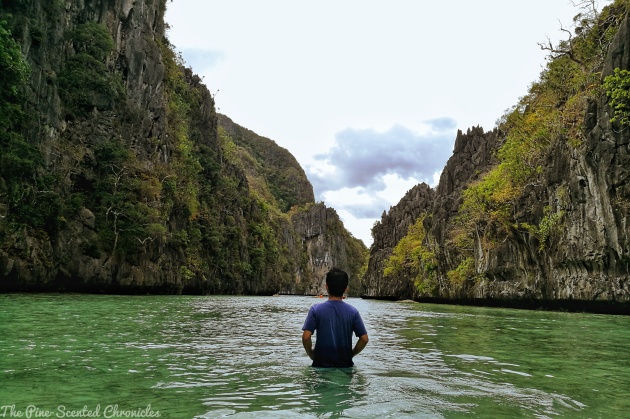 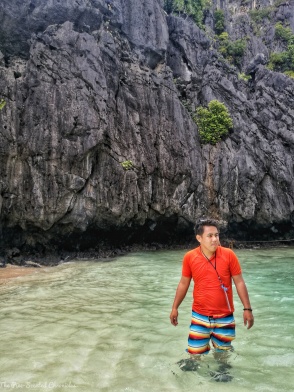 5 thoughts on “El Nido Day One: A Preview of Paradise”