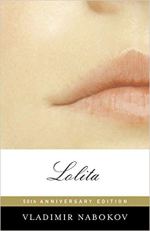 Awe and exhilaration – along with heartbreak and mordant wit – abound in Lolita, Vladimir Nabokov’s most famous and controversial novel, which tells the story of the aging Humbert Humbert’s obsessive, devouring, and doomed passion for the nymphet Dolores Haze. Most of all, it is a meditation on love – love as outrage and hallucination, madness and transformation.

Another work week is about to end – the first full week that I worked entirely offsite because of the imposition of an Enhanced Community Quarantine in Northern Philippines. Other Philippine provinces are also imposing their own lockdowns to stymie the spread of the feared COVID-19 pandemic. A majority of the world is also shutting down its doors. I just hope and pray that it will end soon, and I’ll wake up to the news that the world is rid of the pathogen.

On a brighter note, this virtual lockdown has allowed me to catch up with my writing and reading. With March being my European reading month, it is inevitable that I will be touching base with one of my favorite domestic genre – Russian literature. And what better way to explore Russian literature than immersing in one of its most renowned (and also most controversial)titles – Vladimir Nabokov’s Lolita.

Yes, I have heard a lot about this great “pillar” of literature. I have also encountered it in numerous must-read lists. However, I was so ambivalent about availing a copy of the book that it took me years before I bought one. I wasn’t also originally planning on reading it this year but after it was recommended by a devout reader, I know I have to dig deep.

I am already done with the first part and just started with the second part. Obviously, this novel is about Lolita, a young teenaged girl, to be more specific, the obsession of one matured man, named Humbert Humbert, towards a young girl. The prose was written like a sort of a memoir and is related mostly on first person-of-view by Humbert Humbert. Humbert Humbert, however, is more of a nickname rather than a real name.

The overtones of HH’s obsession for Lolita, also known as Dolores Haze or Lo (yes, the names can be a little discombobulating), dominated the narrative. The sexual innuendos were overwhelming and I can perfectly picture a pedophile behind the façade of HH. His delusions were referenced countless of times but he was quick to deny it. It almost reminds me of Captain Ahab’s obsession on Moby Dick. Both novels also explore the depths of human nature.

Speaking of human nature, I am assuming that it will form part of the majority of Lolita’s foundation. Psychometry is going to be essential in understanding the whole story. Or it could also take on another turn which I am not expecting. To be honest, I had a difficult time warming up to the narrative because of the perplexity of Humbert Humbert’s labyrinthine thought process. I am still warming up to the story and I am hoping that it is more than just a story of uncharacteristic and unnatural obsession. There is a depth to it but I am still trying to sift through the prose so I might only be able to point it out as I progress further into the narrative.

How about you fellow reader? What book or books are you currently reading? I hope you’re staying safe in the comfort of your homes. Happy reading and may everyone have a safe weekend!