At the conclusion of our first day in El Nido, we managed to get some free time which allowed us to interact and get to know our AirBNB hosts better. Our hosts is an Italian-Filipino couple. From the Italian boyfriend, we got to learn a little of Italian culture. In particular, he compared Filipino and Italian cuisines. As the nation that blessed the world with pizza, gelatto and spaghetti, Italians are very passionate about cooking and food in general. He highlighted that unlike Filipinos, Italians prefer to preserve the natural flavors of their main ingredients. Imagine how appalled he was upon learning of the Filipino’s “unhealthy” dosage of soy sauce, vinegar and MSG being poured in Filipino dishes. Unsurprisingly, they whip up their own spaghetti sauce from scratch rather than buy ready-made sauces.

We’ve also learned that our host owns another AirBNB accommodation in Boracay. During this time of the year, he usually retreats to the Philippines to escape the morbid cold in blown in by winter in his motherland. It was interesting talking to our hosts as they were both very open and loquacious. Oh the wonders of interacting with other individuals. It does enrich one’s understanding of the world.

For the second day in a row, we were roused by the cacophony of sounds emanating from the roosters, reminding us that we are in a city (or town) not our own. The serene sounds of the countryside is a stark dichotomy from the pandemonium of the metropolis that is always in a rush, always teeming with activities. Needless to say, my friends had yet another early wake up call.

After munching down our free breakfast served by our hosts, we proceeded to the beachfront. Even though the clock has barely struck eight, the area was already abuzz with activities. From my early musings, I have noticed that in the company of the locals are several foreigners, mostly Europeans, who like our host, I have surmised, flew over to escape winter. Some foreigners were staying as well where we were staying. I also encountered a French traveler during our early morning Taraw trek the following day. El Nido has earned quite the reputation.

When everything was ready, we sailed out of the bay into the open sea to officially commence our adventure for the day. On our way to our first destination, we passed by several islets which share similar features – towering rock formations topped by green canopies. Whilst I was illuminating on this, we’ve already reached Entalula Island, our first stop for the day.

Just like our first day, we were opening our second touring day with another beach-y adventure. Unlike Commando Beach, however, Entalula has a limited beach space. Moreover, half of the beachfront was privately owned. With limited activities, we spent our time taking pictures of our idyllic environment. Every now and then, we would dip into the huge saline solution before us. The island is surrounded by snorkeling sites which we refrained form in order to preserve our energy; we do have a long day ahead.

Entalula Island served as our warm up for the day. We then proceeded to our next destination. Our next island had the requisite white sand. However, it was not our goal for the island houses a cave on its fringes. Cudugnon Cave, like the Secret Lagoon, is a natural formation which lay incognito from the naked eye. To enter the cave, we must pass through a small opening carved on the rock wall. It was easy exploring the cave as it has only one main chamber. It is not as grand as some caves I’ve been to but it was nonetheless a curious side to discover in El Nido.

Because of its limited size, we had to enter the cave in batches. There were some stalagmite and stalactite formations but the lack of luster suggest that they’re mostly dead. It is unfortunate because it takes decades, even centuries, for one formation to grown even just an inch. Unlike most caves, Cudugnon is well-lit as its wll was jotted with holes from which light seeps through. It may not be that remarkable but it gave us a brief respite from all the beach bumming and water-related activities El Nido is quite known for.

Speaking of water-related activities, our next destination offered just that. Our boat unexpectedly anchored in the middle of the sea. Yes, we’re snorkeling in the open seas. I guess it can’t be helped. Once Voltaire plunged into the deep unknown, it didn’t take a lot for Ziv and I to be persuaded. This was, after all, our first and only snorkeling experience in El Nido. The snorkeling site was rather deep so it was kind of difficult appreciating the corals underneath. It was still pretty and otherworldly even though we had to appreciate it from about three meters above. Schools of fishes also swam around us. Because of its depth, it was a good spot for free-diving.

Immersing in water inevitably zaps one’s energy so it was a welcome news when our guide announced that we are going to have our lunch on our next destination – Snake Island. After about an hour of navigating the deep azure, we finally reached Snake Island. Contrary to its ominous name, the island is not safe haven for snakes. Apparently, the island derived its name after the long sandbar that slithers towards a nearby island. On a low tide, the sandbar is exposed but I guess it wasn’t our day.

Snake Island’s main denizen is not a serpent but a monkey. It would have been fine if the monkey was well-behave but it wasn’t. Like Aladdin’s Abu, it was playful and has the proclivity to snatch visitors’ things. It even snatched the shawl of one of our traveling companions, a pair of Dutch (judging from the language they speak) ladies who were just out for some tan. Thankfully, the monkey never bothered with us. Its unruly disposition is the main reason why we had our lunch in the boat rather than on the island.

To get an overview of the island and its environs, one must climb the small hill at the tip of the island. There is a gazebo-like structure which provides shade from the scorching heat. But who cares about the heat when the view is simply gorgeous – the deep blue of the sea that contrasts with the thick verdure of the neighboring island. The snaking sandbar can be seen from the viewpoint as well as it glistens, sandwiched in between two sides of dark blue spaces. 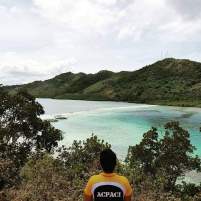 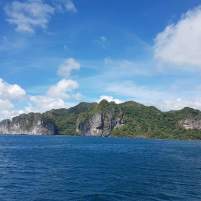 If there was one word to describe how I felt at that moment, it would be euphoria. The restful and arresting site made us forget our worries for our responsibilities beyond El Nido. To boot, we were basking in the magnificent beauty of nature.

Post-lunch, we proceed to another cave, the Cathedral Cave. It was carved by nature on the fringes of another island. The only way to get in and discover its beauty is through boats. Big boats, like ours, however, cannot enter the cathedral-shaped ingress. We were left to marvel at its beauty from the outside. According to our guide, the area was once abuzz with snorkeling activities. When a nest of the highly venomous sea krait was discovered, snorkeling activities was banned in the area.

Our last stop for the day was Pinagbuyutan Island also referred to as Inabuyatan Island. Translated from the local dialect, its name meant “Enchanted Island” because of the towering limestone cliff that dominated the island. At 337 meters above sea level, it is an imposing formation that also serves as a fortress for balinsasayaw birds who build their nests on this limestone cliff. The nests are gathered by the locals and sold to restaurants as it is the primary ingredient for an exotic (and usually pricey) delicacy, the bird’s nest soup. The island’s stunning visuals – the limestone formation, fine sand, and idyllic grassland – all made for a fine final destination to conclude our second and final full day of touring.

After we cleaned up, we proceeded to the town center which was just one tricycle  ride away from where we were billeted. Just like most beach destinations in the country, El Nido becomes more alive after dark, which is kind of ironic because the town has inconsistent power supply; we experience blackouts in every single day of our stay. Strolling around, I can’t help but be dwarfed over by the foreigners who far outnumbered the locals. Had I not remembered I was in El Nido, I’d have thought I was in a foreign land. This stark contrasts made El Nido an even more memorable experience.