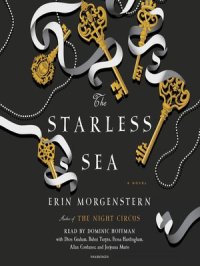 “Far beneath the surface of the earth, upon the shores of the Starless Sea, there is s a labyrinthine collection of tunnels and rooms filled with stories. Zachary Ezra Rawlins is searching for this place, though he does not know it. When he discovers a mysterious book in the stacks of his campus library, he begins to read and is entranced by tales of lovelorn prisoners, lost cities, and nameless acolytes.

A bee, a key, and a sword emblazoned on the book lead Zachary to two people who will change the course of his life: Mirabel, a fierce, pink-haired painter, and Dorian, a handsome, barefoot man with shifting alliances. These strangers guide Zachary through a door conjured from paint to the place he has always yearned for.

Amid twisting tunnels filled with books, gilded ballrooms, and wine-dark shores, Zachary falls into an intoxicating world soaked in romance and mystery. But a battle is raging over the fate of this place, and though there are those who would willingly sacrifice everything to protect it, there are just as many intent on its destruction. As Zachary, Mirabel, and Dorian venture deeper into the space and its histories and myths, searching for answers and one another, a timeless love story unspools, casting a spell of pirates, painters, lovers, liars, and ships that sail upon a Starless Sea.”

It’s been some time since Erin Morgenstern published a full length work. Her debut work, The Night Circus, was an instant sensation, romping off to wins in some award-giving bodies. The novel, however, failed to impress me. The writing was great and the language was flowery (a little too flowery for its own good I guess) but the plot twist in the end just left me perplexed. It sufficed to call off further adventures into any of her works. Or so I thought.

About eight years since the publication of her debut work, Morgenstern made a comeback with her second novel, The Starless Sea. I wasn’t originally planning on reading it because of my rather unpleasant experience with The Night Circus. However, things started to change after I have read several persuasive book reviews which sang endless praises for the book. Staying true to the bandwagoner that I am, I purchased a copy of the book (with a little bit of hesitation).

With traces of ambivalence, I decided to immerse in The Starless Sea. This is after reading four books published in 2020 in a row. The story started smoothly enough and reminded me of Morgenstern’s flowery language. Don’t get me wrong, I do have a thing for flowery narratives. However, I don’t always let it carry the biggest weight in my assessment of any story. Again, I am a plot-centric reader but a beautiful language is always an added bonus.

The narrative opens with a cryptic passage about a pirate who was locked up in the dungeon. The short passage’s title is Sweet Sorrows. The story then moved to the present, well, not really, for the story shifted to January 2015, to a New England campus. The main character, Zachary Ezra Rawlins was also introduced. He is a graduate school student pursuing his masters degree. In one of his random escapades to the university library, he pulled out a book titled… guess the book’s title. Yes, correct. The book’s title is Sweet Sorrows. Zachary Ezra Rawlins was spooked when he found similitude between the book and his life. That was when things begun to get more interesting.

Zachary Ezra Rawlins then meets Dorian and Mirabel. These are not chance encounters, however, for they came from a subterranean world that is invisible to the ordinary individual. I must say that I am starting to get a major Haroun and the Sea of Stories vibe with how the story is progressing. There are some vestiges of Neil Gaiman’s Neverwhere as well. I don’t see anything wrong with this though as both are great books.

The story’s structure alternates between Zachary Ezra Rawlins’ story and chapters from Sweet Sorrows. In short, there are two stories that the readers must follow. I do get the feeling that this divergent stories will converge later on. It is just a hunch. The story’s structure can also be its own undoing. I’ve read that most of the gripes of readers with the novel is the confusion; they didn’t understand the plot. With how the story was written, it was easy to see that. This literary style, when executed properly, can give a pleasant reading journey. For me, it is still too early to call for I am roughly a quarter into the story.

Now, you might be wondering why I keep using the main character’s full name rather than just his first name – Zachary never Zack. This is because every chapter opens with his full name – Zachary Ezra Rawlins. Does it have something to do with the story or is just purely Morgenstern’s quirk? I am not sure. I’ll just let the story flow and judge from there. Have I mentioned already how intricate Morgenstern’s descriptions are? LOL.

With over 300-pages more to unravel, I still have a long way to go with the story. It is promising by far. I still have chapters of world-building to go. I just hope that they’ll be great, innovative and highly imaginative. But with Morgenstern’s knack for describing, it is not going to be much of an issue I guess. My hope is that the plot won’t fall apart later in the story, the way The Night Circus did. Crossing my fingers. My hands are tied this weekend!

How about you fellow reader, what book are you going to read this weekend? I hope it is a book that you’ve been looking forward to. Moreover, I hope you enjoy it. Keep safe! And happy weekend!