And so, our journey is about to come to a close as the third mountain looms over the horizon.

After a couple minutes rest at the junction, the remaining seven of the original twelve began the trek to the summit of Mt. Hapunang Banoi. But before we begin, let’s have some trivia first. The mountain’s name is eponymous to the eagles seen having their meal on the mountain. “Hapunan” is lunch in English while “Banoi” is the local’s term for the eagles.

Mt. Hapunang Banoi is supposed to be our highest climb for the day. However, we’ve opted to cut our trek and end it at the first view point. According to our fellow trekker who has been to the summit of the said mountain, there is nothing spectacular at the summit. Our tour guide also acquiesced with her suggestion.

So after regrouping for a couple of minutes, off we go again!

The path towards the view point is almost similar to that of Mt. Pamitinan. Through the forest, we walked  through harmless paths first before the danger level started escalating. Although we only had to do it once, we again had to scale the side of big rock to move forward. The rocks again have jagged edges so we had to take our time climbing it to avoid unnecessary injuries.

Fortunately for us, the number of people climbing Mt. Hapunang Banoi isn’t as many as the previous two mountains. Though we were all exhausted, our trek was more leisurely because it is less crowded.

About 30 minutes after alighting from the junction, we’ve already reached our destination. It was a quicker trek than either Mt. Binacayan or Mt. Pamitinan. Again, we took the opportunity to take pictures, especially that we didn’t have to compete with anyone to take our pictures. We can now take our time.

It was when our peers were at the top of the rock that the rain started to fall. It started with small drizzles until it grew heavier. Fortunately for us, the rain didn’t last very long. However, it has already made our path more slippery, thus increasing the danger levels. The two who climbed up the rock also found it difficult to climb down due to the slippery rocks but luckily they were able to climb down unscathed.

After the rain has passed, we took our final opportunity to take pictures, whether solo, or in groups. The view is a very big consolation to the troubles we’ve encountered during the day.

On our way back, we used the less treacherous trail so as to avoid any accidents, especially that the trail has already been dampened by the rain. Fortunately, none of us got hurt. However, we heard that a female trekker slipped on the path and had to be brought down in a stretcher. I hope she didn’t sustain any serious injury.

In no time, we reached junction where we rested a bit before going to our next destination, Wawa Dam. To get there, we used a different trail than the one we’ve previously used in going up the junction.

This time around, the trek down is quite easier. It was again a bit of a leisurely walk until we reached a stream. We followed down the stream to get to the Wawa River. In the stream, there is a small pool where one can jump and swim. We all opted out of it though and thus we proceeded to Wawa River.

Upon reaching the river, we were all too tired to take a dip, except for two of us. While they were swimming, the rest of us just sat down and rested. To entertain ourselves, we played skipping stones. All in all, it was a brief but tranquil stopover before proceeding to our jump-off point which will mark the end of our day.

At the jump-off point, we bathed and got ready for the ride back to the bustling Metro. Whew. Three mountains in one day. I could barely imagine myself doing that. But I did. It is probably thanks more to my genealogy rather than my ability. Being a mountaineer, with Igorot DNA running through my veins, quite helps when faced with such ominous tasks. 😀

Now that I had my first taste of mountains for the year, I am now looking forward to climbing more. Besides shedding off some of my excess weight, the experience and the peers I have gained along the way are more than enough to motivate me to climb more. So, let us climb mountains my dear friends! 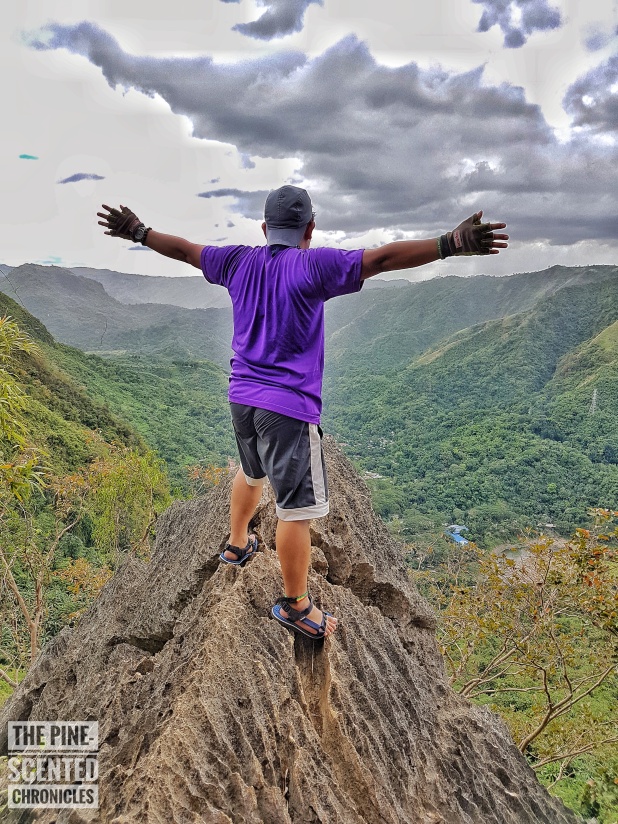 My first trilogy hike takeaway. Climbing mountains is daunting, however, with the right group of people, it becomes a whole lot easier. But more than the pictures taken, the challenges overcome, it is the experience, the camaraderie and the friendship formed in these mountains amongst strangers that are the biggest payoffs to the exhaustion and minor injuries sustained on the way. Somehow, there is a different kind of motivation in knowing that one is not alone in scaling obstacles, in mountains and in life.

2 thoughts on “Rizal Trilogy Hike: An Assault to the Top Part III”