June 12, 1991. Nestled in the central Zambales mountains, Mt. Pinatubo was once just an ordinary mountain, thickly covered by a thriving flora. The area is the traditional home of the Aetas, the first Philippine settlers. But on an ordinary day, eruption columns came shooting to the sky, surprising the locals residing in the area surrounding it.

Everyone was caught off as it began spewing volcanic ashes. Two days later, the volcano would erupt even more, producing the 20th century’s second largest terrestrial eruption. Only Novarupta’s eruption in the Alaskan Peninsula is larger. The eruption caused an ash fall that would reach out to as far as Cambodia, Vietnam and Malaysia.

To everyone’s misfortune, the Central Plains was also being ravaged by Typhoon Diding at the same time that Mt. Pinatubo began erupting. The typhoon obscured much of the eruption but it was the main catalyst in the widespread lahar flow damage that affected most of the Central Luzon area. Lahar was caused by the mixture of the ash and the rainwater.

Around 847 people were reported to have perished because of the eruption, most of whom were crushed when their roofs collapsed due to the weight of accumulated wet ash. For years, lahar flow from the mountains constantly displaced the residents in the area. But Mt. Pinatubo’s impact is more far-reaching as its eruption caused a heavy damage to the ozone layers, becoming a major catalyst in climate change.

Rising From The Ashes

Although still classified as an active stratovolcano, there has been no recorded eruptions. Just like a phoenix, those who have been affected by the cataclysmic eruptions have begun rising from the ashes. Slowly, the residents started picking up their old lives and rebuilding their communities. To earn a living, they returned to what they knew best, agriculture.

“Beyond the clouds the sun is shining”. From the remnants of the eruption site, a wonderful sight emerged. The caldera began filling with water from monsoon rains and soon afterwards, Lake Pinatubo formed. In no time, the newly formed lake began drawing visitors. With this growing interest in Lake Pinatubo, new avenues opened to the locals. Tourism started to boom and an alternative source of income emerged. 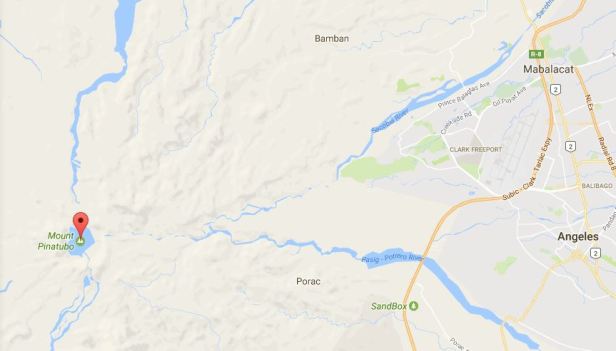 How to Get There

For do-it-yourself trips from Manila:

Important Note: Reservations with the local tourism office must be made prior to your trip , whether in an organized group or a do -it-yourself (DIY).

My high school friends and I organized a Saturday trip to the fabled Mt. Pinatubo. For our trip, we had a very early wake up call. At around 12 midnight of March 4, I was already on my way to Solid North Cubao terminal, which is our meeting place. Once we were complete, we rode the bus and at 1:30 AM we’re on our way to Dau. The trip was a bit quick as we reached our destination at about 3 AM.

When we finally saw friend, we immediately looked for a place to have our breakfast. Luckily, most of the fast food chains in the area are open 24-hours. Once we’ve had our fill, we returned to the bus terminal to look for a bus passing by Capas Junction.  We rode an ordinary bus as most of the air-conditioned buses were already full. Upon alighting at Capas Junction, we rode a tricycle to Brgy. Sta. Juliana, the jump-off point for our weekend adventure.

The tricycles were small. We didn’t expect that the ride would take some time, 30 minutes minimum. Unfortunately for us, the morning breeze was making our spines shiver. I was lucky to have brought a jacket but my companions didn’t. By the time we reached the municipal tourism satellite office, we were all feeling cold, and cramped because of the tricycle’s limited legroom.

At the jump-off point, we registered and paid the registration fee of PHP 2,000.00. This covers the environmental fee, tour guide fee, and the driver fee for our four-by-four ride. It was still dark but the small community is slowly coming alive with the arrival of numerous tour groups.

As our group was the smallest (there was just five of us), we were the first group to leave for Mt. Pinatubo’s base. To be able to reach Mt. Pinatubo’s base, we have to ride four-by-four jeeps. Otherwise, we will have quite a long walk through the lahar-laden riverbed. The jump-off point is about 25 kilometers away from the Mt. Pinatubo’s base and takes about an hour to travel.

When we finally reached the base of Mt. Pinatubo, we began our trek. The trek was an easy and quick one, much to my chagrin as I expected a physically challenging one. The trail simply follows the track of a stream. The challenge is how to keep our feet dry because we had to cross the streams countless times.

If you’re expecting an upward climb with steep inclines, then you’d be disappointed. The trail rarely got steep because it is mostly flat, gradually going up. The trail was also a bit rocky and narrows as you climb higher. It’s the easiest mountain I have climbed (or walked!) so far.

We started our trek at 7 AM and we reached the summit by AM. Luckily, we were the first group to reach the lake so we had the chance to catch it at its most tranquil. We were awestruck even as the sun was obscured by the early dark clouds. Being in Lake Pinatubo feels like I was in a different country, say, Switzerland, with its numerous snow-capped mountains and lakes.

The view at the top view deck is amazing enough but we went down the lake shore to have an even more intimate experience of the place. Although the road up was fraught with reminders of the 1991 disaster like the eroding mountainsides, Lake Pinatubo was peaceful, a far cry from 26 years ago. Without the early morning crowd, we delved in the serenity the place offered. We also took the opportunity to snap countless pictures.

But after about 30 minutes of peace, numerous groups began crowding the place, and with them came the rambunctious noise which we tried to evade. Just like us, they went down the lake shore so we went back up to have our early lunch. We feasted on roasted chicken we bought before climbing. We also indulged in the hot coffee we bought from a vendor there. However, the coffee was really pricey that my friend had to bargain with the vendor. Luckily, he gave us a discount!

It feels great being in a place like this. It would have been a perfect experience had it not been for the crowd, which I guess one can never avoid anywhere one goes. But it made me smile to see foreigners among the crowd of mainly Filipino trekkers. I never though that they’d be interested in an off-the-beaten path destination like Lake Pinatubo. But who can blame them, it’s an amazing place!

At around 10:30 AM we decided to climb down. The descent, unlike the ascent, was more difficult because of the throng of early climbers going up. Nonetheless, we reached the parking area at around 10:45 AM and at around 11 AM we were already on our way to Brgy. Sta. Juliana for our wash-up. Out of the darkness, our environment became more recognizable. It was a vast tract of arid land which stretches for miles. It is also very dusty because the ground has fully dried up. It is best to have any eye protection like sunglasses. Also have a handkerchief in hand to cover the mouth. The dust can get really thick if the jeeps are running at top speed.

Well, adieu for now Mt. Pinatubo! It was one amazing experience!