Robert Langdon, Harvard professor of symbology and religious iconology, arrives at the ultramodern Guggenheim Museum Bilbao to attend a major announcement – the unveiling of a discovery that “will change the face of science forever.” The evening’s host is Edmond Kirsch, a forty-year-old billionaire and futurist whose dazzling high-tech inventions and audacious predictions have made him a renowned global figure. Kirsch, who was one of Landon’s first students at Harvard two decades earlier, is about to reveal an astonishing breakthrough – one that will answer two of the fundamental questions of human existence.

As the event begins, Langdon and several hundred other guests find themselves captivated by an utterly original presentation – which Langdon realizes will be far more controversial than he ever imagined. But the meticulously orchestrated evening suddenly erupts into chaos, and Kirsch’s precious discovery teeters on the brink of being lost forever. Reeling, and facing an imminent threat, Langdon is forced into a desperate bid to escape Bilbao. With him is Ambra Vidal the elegant museum director who worked with Kirsch to stage the provocative event. Together they flee to Barcelona on a perilous quest to locate the cryptic password that will unlock Kirsch’s secret.

Navigating the dark corridors of hidden history and extreme religion, Langdon and Vidal must evade a tormented enemy whose all-knowing power seems to emanate from Spain’s Royal Palace itself . . . and who will stop at nothing to silence Edmond Kirsch. Following a trail illuminated by modern art and enigmatic symbols, Langdon and Vidal uncover clues that ultimately bring them face-to-face with Kirsch’s shocking discovery . . . and the breathtaking truth that has long eluded us. 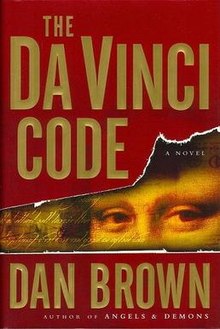 Robert Langdon is back! One of the most recognized symbologist in the world of literature, he is back with what promises to be yet another heart-pounding, action-filled thriller. Dan Brown gained international recognition with his controversial novel, The Da Vinci Code, which was banned by the Catholic Church. But this anathema only cemented Brown’s way to becoming one of today’s most recognized and most controversial authors.

I, for one, jumped into the Dan Brown bandwagon due to the controversy that surrounded The Da Vinci Code. Did it change nor challenge my beliefs? Definitely not because I treated it as it is, a work of fiction. However, that is out of the question. On the subject of literature, I am fascinated with Dan Brown’s captivation with religion in general, especially with Christianity. Moreover, historical motifs are abound in his books.

As always, religion played a centrifugal role in Origin. At the heart of the story are two enigmas that creationists and evolutionists constantly argue on – where did we come from and where are we going. To these questions, Edmond Kirsch believed that he had the answers. A famed futurist and atheist, he is hellbent on disproving the creationist theory in order to eliminate religion and let science reign.

Unfortunately, before Kirsch could get the chance to show the world his earth-shattering discovery, he was murdered in front of a select audience which included Robert Langdon and Ambra Vidal, the future queen consort of Spain. Owing it to Kirsch’s memory, Langdon and Vidal set out on a mission to unveil his discovery. But their mission is not going to be easy – a brainwashed mercenary is hot on their tails.

In spite of the book’s rich religious overtones, the story also dealt on a plethora subjects, the most relevant of which is the significance of technology in our present society. It extensively dealt about the implications and consequences of its excessive usage and its unbridled growth and development over the years.

At the center of this technological advancement is the development of artificial intelligence (AI). This is perhaps an obscure response to one of the questions raised at the beginning of the story. In the story, Kirsch developed his own AI assistant which named itself Winston. Winston, through mobile devices, talked and thought like a human being. Brown showed the future of AIs  where they have taken over the basic human functions.

It cannot be denied that technology has taken a giant leap and its growth is nothing but exponential. The story’s conclusion is surprising but not unexpected. Brilliantly, albeit chillingly, the conclusion raised questions on the current state of artificial intelligence, the most significant of which are  (1) do AIs have emotions and (2) can they decide on behalf of their creators. Although implausible, the story’s conclusion gave me one of those very few WTF moments that made me think deeply.

Another positive attribute of the book which I appreciated is its being grounded on current events. It dealt with subject matters of the old while fringing on the new. By touching on more universal subjects like fake news, the advancement of technology and the darker shades of the Internet, Brown made the story more relevant in today’s world. These, plus incorporating universal thoughts and profound questions, Origin made a compelling tale.

Origin also shared a lot in common with the other Dan Brown novels. The most palpable of which, aside from the religious overtones, is the presence of a female protagonist. There is also the usual romantic notions which often concludes unfavorably against Langdon. Lastly, there is the presence of an unknown antagonist who endlessly chases the protagonists.

In spite of these similarities, there were some glaring disparities. Compared to his previous works, Origin is sparingly filled with symbols. This is surprising and unfortunate because I always enjoy learning about the symbols that Brown incorporate in his works. Moreover, the book didn’t live up to my expectation of it as a heart-pounding thriller. Pacing has been my issue with Dan Brown as his stories are absurdly fast. However, Origin could surely use some of that exhilarating suspense.

Overall, Origin failed to hit the mark. It had a great and compelling story line but the writing is just mundane. It just stirs the reader enough to keep him on turning the pages. Dan Brown’s latest work is entertaining – symbols and codes are always interesting topics. However, if you’re looking for a solid literary read, then you might as well skip this one. It just makes up for a good pleasurable reading.

Recommended for those interested in symbolism; those who enjoy suspense novels; those looking for a pleasurable read.

Not recommended for the religiously devout and for those who are looking for a great literary read. 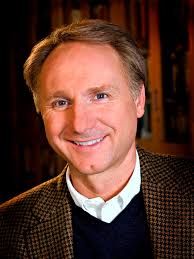 Known for his highly controversial novel, The Da Vinci Code, Dan Gerhard Brown was born on June 22, 1964 in Exeter, New Hampshire. He grew up in the campus of Phillips Exeter Academy where his father taught mathematics. Upon leaving the academy, he attended Amherst College. He graduated in 1986.

He didn’t immediately pursue writing upon graduating. He first pursued a career in music, even self-producing a children’s cassette entitled SynthAnimals. He also formed his own record company called Dalliance. To further pursue his musical career, he moved to Hollywood in 1991. He taught classes at Beverly Hills Preparatory School and became a member of the National Academy of Songwriters. It was in the latter that he met Blythe Newlon, the Academy’s Director of Artist Development. In 1993 they moved back to New Hampshire and in 1997, they got married.

It was Sidney Sheldon’s Doomsday Conspiracy that finally inspired Brown to write thrillers. Eventually, he quit teaching and in 1996, he finally published his first novel Digital Fortress. In spite of its minimal success, he followed it up with Angels & Demons and Deception Point, published in 2000 and 2001 respectively. Angels & Demons is where Robert Langdon was introduced. Unfortunately, all his first three novels had very little success. It was his fourth novel, The Da Vinci Code, that placed Brown on the pedestal of fame. This new found popularity, in spite of the controversy, helped sky-rocket the popularity of his other books.