Kikuji has been invited to a tea ceremony by a mistress of his dead father. He is shocked to find there the mistress’s rival and successor, Mrs. Ota, and that the ceremony has been awkwardly arranged for him to meet his potential future bride. But he is most shocked to be drawn into a relationship with Mrs. Ota – a relationship that will bring only suffering and destruction to all of them.

Ever since I began reading Haruki Murakami, through that eclectic novel 1Q84, I was since enamored with Japanese authors. However, my knowledge of Japanese works was still limited. It was only through list.challenges that I have encountered some of the more recognized Japanese authors like Kenzaburo Oe, Kazuo Ishiguro, and Shusako Endo.

One other Japanese author that piqued my curiosity is Yasunari Kawabata, who happens to be a Noble Peace Prize Winner in Literature as well. I was fairly impressed with his resume that I was on the lookout for his books on online sellers and even on bookstores. Thankfully I was able to read some of his works like Beauty and Sadness, The House of Sleeping Beauties and Snow Country. I liked the sentimentality and brevity of his works. But there was one particular book that I have been wanting to read – Thousand Cranes, which proved quite elusive. Thankfully, a cousin gifted it to me. And I read the book the soonest I could.

My first impression of the book is that it is quite. . . thin. But as they say, first impressions never last. Moreover, there is always the concept of “pocket dynamo” – small but smacks of power. In retrospect, why would its thinness even surprise me, considering that Kawabata’s other woks are equally thin. However, I expected it to be longer, or at least more substantial compared to his other works. Nonetheless, the novel’s brevity is a welcome change after devouring lengthy novels.

Set in post-World War II Japan, Thousand Cranes introduces us to Kikuji who is being arranged for marriage by one of his father’s mistresses, Chikako. He was called in for a traditional tea ceremony and the first thing that Kikuji notices is the girl’s handkerchief that contains a picture of a thousand cranes. But he was taken aback by the presence of his father’s other mistress, Mrs. Ota, with whom he was having an illicit affair.

Unsurprisingly, Kawabata explored a socially unconventional topic, or what one might consider as taboo. He once again pushed the envelope by dealing on a discomfiting aspect of Japanese society, one that is well known to be more laid back. In what is touted by most as his towering work, Kawabata examines the dichotomy between the old Japan and the Japan that is moving towards the more liberal Western mindset.

Just like Kazuo Ishiguro’s A Pale View of Hills, the main character is a representation of post-World War II Japan. Through Kikuji, the novel depicted Japan’s shift from its old culture towards the more moder Western culture. Kikuji’s bachelorhood and his dalliances with different women is an influence by Western culture. However, he is still anchored to the past because of his relationship with his father’s mistress.

But Thousand Cranes is more than about shifting culture. It is also about the quintessential young man who struggles to establish his authority as a man. By doing things that is not expected of him, Kikuji is showing that he can make his own decisions, especially amidst Chikako’s adamant interference into his life. Thousand Cranes is about two kinds of desire – the desire for someone and the desire to be someone.

Considering that Japan has a very conservative culture, reading books about these kinds of subjects is eye-opening. Yasunari Kawabata, through his works, is showing readers different sides of Japanese culture. In The House of Sleeping Beauties, to highlight man’s insatiable appetite for vitality, Kawabata wrote about old Japanese men flocking to a house where they can sleep with younger women who were drugged to sleep. It is the same case with Thousand Cranes.

Like its Japanese contemporaries, the novel is written with a sense of nostalgia. Reading Thousand Cranes is like watching a sepia film, it is filled with so many sentiments. There is just something about East Asian authors that make them want to appeal to the inner sense of the readers. They dwelling on philosophy, passion and harmony. As a fellow reader mentioned, overdose of these elements are nauseating.

Kawabata has an uncanny ability of using ploys that keep his readers engrossed with his narrative. Although Thousand Cranes is a rather short novel, its content speaks volumes. His observation of culture and behavior is brilliantly showcased in this book. Moreover, he rarely shies on writing about subjects that make readers uncomfortable, painting a vivid picture of his country through words that captivate the mind.

Thousand Cranes places the proverbial microscope on young men growing up in a fast changing Japan. The country, while anchoring itself on its traditions, is slowly moving towards the western mindset. The book appeals to the subconscious in a nostalgic manner by playing around with emotions to capture the imagination. Kawabata’s Japan is different from what laymen perceive it to be. In a manner of speaking, he is painting a more “humanized” Japan through his works. But Thousand Cranes appeal to the general reading public because it mirrors the imperfections of human nature, something that we all know something about.

Not recommended for those who find East Asian sentimentality overbearing. 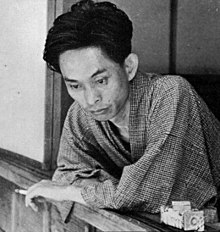 Yasunari Kawabata was born on June 11, 1899 in Osaka, Japan, to a family of well-established doctors. He got orphaned at the age of 4 and was eventually raised by his grandparents, who also passed away when he was 7 (grandmother) and 15 (grandfather) years old.

After graduating from Junior high school in March 1917, he moved to Tokyo where he successfully passed the First Upper School which is being run by the Tokyo Imperial University. He entered the Humanities Faculty as an English major in 1920. He graduated in 1924, having already caught the attention of renowned writers and editors through his submissions to Kikuchi Kan’s Bungei Shunju, a literary magazine.

His writing career began through a series of short stories, including the widely acclaimed The Dancing Girl of Izu. His first novel, The Scarlet Gang of Asakusa, was published in 1930. This was later followed by more novels like Snow Country, Thousand Cranes and The Sound of the Mountain. Because of “his narrative mastery, which with great sensibility expresses the essence of the Japanese mind”, Kawabata earned the coveted Nobel Peace Prize Award’s nod in 1968.

He died in 1972 in an apparent suicide attempt. However, many of his close associates, including his widow, considered his death as accidental.