Eleven-year-old Satsuki and her sassy little sister Mei have moved to the country to be closer to their ailing mother. Soon, in the woods behind their spooky old house, Satsuki and Mei discover a forest spirit named Totoro. When Mei goes missing, it’s up to Satsuki to find her sister, and she’ll need help from some new, and magical, friends.

It is no secret that Hayao Miyazaki’s Studio Ghibli is a Titan in the world of animated films. It has produced some of the best animated films of all times. Everybody loved the fantasy coming-of-age film Spirited Away which won the Best Animated Feature at the 75th Academy Awards. Another animated film that has left an indelible mark amongst spectators is My Neighbor Totoro, another fantasy coming-of-age film. The film has left such an impression on me that when the printed copy was released, I immediately availed myself a copy. The book was part of my August 2018 Young Adult Fiction Month.

There is a different feeling reading a film that was adapted into a book. The paradigm is that literary pieces are adapted into films. The reverse is very rare, if at all existent, but My Neighbor Totoro belongs to the exceptions. To be honest, the experience is significantly different because of this unusual shift. Nevertheless, the overall reading experience was as magical as the film. It still possessed most of the original film’s elements.

As is the case when comparing books with their movie adaptations, the first thing that I did was to compare how the book religiously described and captured what was depicted in the film. For instance, unlike the film, Satsuki, the first born, was comparatively older and more mature in the book than in the film. There were minute disparities as well but it did little to hamper my overall appreciation of the book. Besides, when one gets his momentum going, these disparities are often forgotten, or at least set aside.

The first word that comes to mind when describing the books is magical; yes, as magical as the film. It effortlessly filled the imagination with wonderful imagery without it being overbearing. However, it felt like the magic was toned down a bit but it suited the story because it made the relationship of sisters Satsuki and Mei the true highlight of the narrative. The young sisters reminded readers of the wonderful relationship and special bond of siblings, especially in the face of uncertainties. This special bond is what fillial love is all about – the book reeked a lot of it.

Both the movie and the book brought out the beauty of sisterly love. But whereas I enjoyed the sister’s bond, I lament the passivity of their father. Unfortunately, this depiction is closer to the truth in most Asian households which are traditionally patriarchal. Fathers, being the foundations of the household, are more focused on earning a living to provide for his family. In spite of the mother’s physical absence, her emotional presence still resonated compared to the father.

In the growing absence of the father, the book candidly showed the bond within small Asian countryside communities where neighbors look after each. Furthermore, the book’s setting is a breath of fresh air, away from the hazy urban air. This gave the story a more relaxed flair. All of these add up to a delightful and pleasurable read. The romantization of countryside living is one of the book’s highest accomplishments without putting in too much thought and effort. Kubo created an amazing atmosphere for reading. Oops, not really Kubo but Miyazaki, the one who originally conceptualized the story.

The story takes inspiration from the countryside. The countryside is always filled with magical stories and tales. This flexibility amongst its denizens make it an ideal setting for children’s stories. As someone from the countryside myself, I can easily relate to this. The citizens, especially the elders, have many fascinating stories stored in their creative minds that they share to younger listeners. Some of the stories are meant to delight but most are meant to frighten or discipline impish children. Listening to such stories often filled me with fear, making me subservient to adult’s orders and requests.

However, I have gleaned that Totoro, yes, that puffy cuddly cute monster, is a convergence of both these adult stories and children’s playful imagination. Totoro is that magical companion that we all longed for when we were all younger. It is often believed that children have more open third eyes making them more sensitive and susceptible to certain supernatural phenomena. However, Totoro is more than just a supernatural phenomenon; Totoro is a friend.

As the narrative has already been set out in the movie, it is no surprise that the book’s writing style was simple and straightforward. It was quite easy to follow and understand. Kubo didn’t go beyond the true spirit of the book; pun not intended. He did not try to deviate much from the classical animated film. The book is what I expected it to be – simple, straightforward and heartwarming, everything that the movie was. I guess it is easier to translate a movie into a book than to adapt a book into a film.

Overall, I zoomed past the entire narrative with a wide grin on my face. Kubo gave justice to the original story Miyazaki has envisioned. In spite of the minute revisions, it was still as authentic as the film was. My Neighbor Totoro is a classic animated film that cemented Studio Ghibli’s legendary status as a premier animation studio. The book, the film, the story is something that will be loved for years to come, not only by children but also by adults.

Not recommended for readers who dislike children’s fiction and fantasy fiction in general. 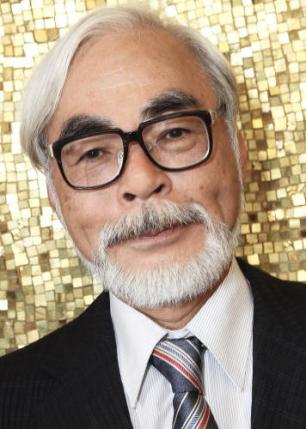 (Photo by Wikipedia.) Amongst lovers of animated films, Hayao Miyazaki is a highly revered name. He is one of the four pillars that have founded Studio Ghibli which produced some of the most popular animated films of all times. This list include Spirited Away (2001), My Neighbor Totoro (1988), Grave of the Fireflies (1988), and The Cat Returns (2002).

Miyazaki was born on January 5, 1941 in Tokyo Japan. His interest in manga found him joining Toei Animation in 1963 where he worked as an in-between artist. There, he stamped his genius in several films. In 1971, he moved, along with Isao Takahata whom he worked with at Toei, to A-Pro. When he joined Telecom Animation/Tokyo Movie Shinsha in 1979, he got the opportunity to direct his first feature films, including Nausicaä of the Valley of the Wind (1984).

In June 15, 1985, Miyazaki reunited with Takahato, and along with two other animators, they formed Studio Ghibli. The Studio’s credentials goes on as all its works met critical and commercial success. Some of its animated films even earned accolades in Japan and in the international scene. On his own, Miyazaki won several accolades, including eight Tokyo Anime Awards, as well for his works.

Miyazaki married Akemi Ota in 1963 and they have two children