Written in the late 1930s, when democracy faces its greatest peril, For Whom the Bell Tolls is Hemingway’s masterful novel about love, death, honor and betrayal. Set amidst the tragedy of the Spanish Civil War, it tells the story of Robert Jordan, an American volunteer guerilla who has only three days to plan the destruction of a strategically important bridge. Facing certain failure, Jordan learns the true meaning of loyalty and sacrifice and the high price of liberty.

While browsing a book sale, a fellow reader recommended to me Ernest Hemingway’s For Whom The Bell Tolls. Since he has read the story already, he gave me the book that he painstakingly found while rummaging through the heaps of books. I am thankful to him because it is one of the books that I have been wanting to read although I barely had an iota on what the story is about. However, I have read two of Hemingway’s works – A Farewell to Arms and The Old Men and the Sea. From the synopsis, I have surmised that it would be more similar to the former. Hemingway, a war veteran, does have a fascination with war fiction.

Unfortunately, the book was left to gather dust until  I contemplated on what book to read. From over a hundred unread books in my bookshelves, I chose this Hemingway classic. Well, first off, it is a work by no less than Ernest Hemingway; his name is enough a stamp of quality and a guarantee to an enlightening read, or at least a powerful one. But that is not always the case as I have learned over the years.

“I loved you when I saw you today and I loved you always but I never saw you before.” ~ Ernest Hemingway, For Whom the Bell Tolls

Set during the Spanish Civil War, For Whom the Bell Tolls relates the story an American guerilla soldier, Robert Jordan. He irregularly works as a soldier fighting against Generalissimo Franco’s fascist forces. An expert dynamiter, he was assigned on a mission to bomb and destroy a strategically important bridge in the city of Segovia. Through graphic and vivid portrayals, the brutality of the Spanish Civil War was depicted in the novel which is Hemingway’s retelling of his experiences as a reporter for the North American Newspaper Alliance during the Spanish Civil war.

So, how do I start this. With Joseph Heller’s Catch-22, I have surmised that I am no fan of war novels. Sure, I have read a lot about wars, like World War II which was extensively depicted in more modern works like Anthony Doerr’s All the Light We Cannot See and Markus Zusak’s The Book Thief. However, these books seem child’s play and did little to prepare me to the more complex war novels. But to be fair, these two works are of a different genre and of a different spirit compared to the aforementioned classical works.

Perhaps the most challenging facet of the novel is its language, and consequently, its overall narrative style. Hemingway’s extensive use of archaic language is nauseating, especially on the conversations. This made the conversations a little too contrived, or a little too stiff and dull. This is the same reaction I had with William Faulkner’s The Sound and the Fury which was entirely written in the colloquial. It was difficult appreciating both classics because of this. Below are some examples of these conversations:

“I call thee Roberto before the others,” she said in a low voice and blushed.

“Those can see thy cigarette butts,” the woman said. “Let fall the blanket.”

“Dying was nothing and he had no picture of it nor fear of it in his mind. But living was a field of grain blowing in the wind on the side of a hill. Living was a hawk in the sky. Living was an earthen jar of water in the dust of the threshing with the grain flailed out and the chaff blowing. Living was a horse between your legs and a carbine under one leg and a hill and a valley and a stream with trees along it and the far side of the valley and the hills beyond.” ~ Ernest Hemingway, For Whom the Bell Tolls

In comparison to A Farewell to Arms (which I favor over this one), Hemingway conjured a very austere atmosphere that has, for the most part of the story, impaired my understanding and appreciation of the novel. The profound use of literary archaism is very straining, very taxing; it did not help the story’s cause. The way the narrative was conveyed was overwhelming and the gloomy atmosphere did not help in assuaging this overwhelming feeling.

One factor that contributed to the bleakness that hovered above the narrative, I have gleaned, is the novel’s plethora of dark, heavy and complex subjects. Well, it is kind of expected considering that the novel is preoccupied with a war. As such, it is no surprise that death is a subject that the novel extensively dealt. Moreover, nearly all the characters in the story have premonitions of their own deaths, eventually leading to an anticlimactic ending. Betrayal was a secondary theme explored in the novel.

In connection to death, the novel also discussed suicide. Driven by their ideologies, the guerillas preferred death over incarceration. This mirrors the Japanese value of hara-kiri or honorable suicide. A bulk of the novel is dedicated to highlighting political ideologies, especially fascism, something that Generalissimo Franco is quite known of. The evils and consequences of fascism and communism were extensively discussed all throughout the narrative. In contrast to betrayal, the novel dealt with more the more positive subject of camaraderie and brotherhood.

The way the story unfolded is unbearably very slow. As the reader immerses in the story, he gets caught in an impasse because Jordan is engaged in an internal conflict that just seems to drag. Halfway through the story, I got confused as to how the story is going to move forward. I wasn’t as engaged with the characters as well because all of them feel dull or underdeveloped. This is in stark comparison with how Hemingway intricately described the ongoing war.

“There will always be people who say it does not exist because they cannot have it. But I tell you it is true and that you have it and that you are lucky even if you die tomorrow.” ~ Ernest Hemingway, For Whom the Bell Tolls

A well-loved classic, I found the novel a bit too jarring for my taste. Whereas Heller’s Catch-22 had a more complacent tone, Hemingway’s For Whom the Bell Tolls had a bleaker one. Contrary to my expectations, I had an overwhelmingly difficult reading experience due to a number of reasons enumerated in this review. I did enjoy the first two Hemingways that I have read but this one is just a tad too complex; the dark subjects, the bleak atmosphere, the stiff characters, and the archaic language all added up to one unpleasant read. It did have its merits but now I need a perfect Hemingway tonic to reverse For Whom the Bell Tolls’ effect on me. Suggestions anyone?

Recommended for avid readers of historical fiction, for readers who generally favor war novels, for the faithful Ernest Hemingway fans, and for readers who like novels that unfold in a very slow pace.

Not recommended for readers who prefer stories with quicker pace, readers who dislike generally dark novels, and readers who like fully developed characters. 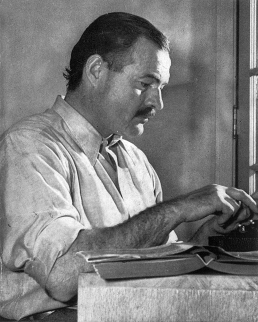 Before enlisting as an ambulance driver during the first World War, he worked as a reporter for The Kansas City Star for a couple of months. He was severely wounded by mortar fire but despite his wounds, he helped assist Italian soldiers to safety, earning him the Italian Silver Medal of Bravery. In 1921, he joined the expatriate literary community in Paris where he met Gertrude Stein, James Joyce and Ezra Pound.

With the encouragement of his friends, Hemingway published his first book, Three Stories and Ten Poems in 1923. It was immediately followed by the publication of yet another short story collection, In Our Time (1925). In 1926, Hemingway’s first full length novel, The Sun Also Rises, was published. His other works include A Farewell to Arms (1929), The Old Man and the Sea (1952), The Snows of Kilimanjaro and Other Stories (1961), and A Moveable Feast (posthumously, 1964). In 1954, Hemingway was awarded the Nobel Prize for literature.

Aside from writing, Hemingway had a passion for bullfights, deep-sea fishing, and travelling. He travelled extensively to Spain, Africa and the Caribbean. In July 2, 1961, Hemingway committed suicide.