Under the streets of London lies a world most people could never dream of.

When Richard Mayhew helps a mysterious girl he finds bleeding on the pavement, his boring life changes in an instant. Her name is Door. She’s on the run from two assassins in black suits, and she comes from London Below.

His act of kindness leads him to a place filled with monsters and angels, a Beast in a labyrinth, and an Earl who holds Court in a tube train.

It is strangely familiar yet utterly bizarre.

Whenever one talks about fantasy and reading, one is inevitably to encounter Neil Gaiman and his works. Just like Murakami, he is an author I have first heard of through my friends. Out of curiosity, I did pick one of his works, American Gods which is about mythology. I was a bit perplexed by Gaiman’s modern reinterpretation of mythology but nevertheless, he did enough to capture my interest through his powerful and vivid imagery. Two years later, I purchased yet another one of his works, Neverwhere.

I bought the latest version of the book, the version that Gaiman prefers. At least that is what it says on the book’s cover. I am looking forward to what is in store for me in Neverwhere because I want to reverse my initial experience with American Gods (although it wasn’t totally bad). I can’t wait to immerse in the unexpected, the surreal, and the fantastic. Because of the building anticipation, I included it in my August Young Adult Fiction month. Oh yeah, I got more than what I asked for. And more.

“So the day became one of waiting, which was, he knew, a sin: moments were to be experienced; waiting was a sin against both the time that was still to come and the moments one was currently disregarding. ” ~ Neverwhere, Neil Gaiman

Neverwhere relates the story and adventures of Richard Mayhew, a newly-engaged young businessman who was living a very quotidian existence. All of that drastically changed when, while he and his fiancé were on the way to meeting his fiancé’s boss, they encountered an injured young girl. He opted to help the girl named Door in spite of his fiancé’s protests. Richard nursed Door to recovery and when she fully recovered, she asked him to find Marquis de Carabas. When the Marquis and Door magically disappeared, Richard’s life started spinning out of control.

Richard was transported to a whole new world – the London Below. What Richard saw overwhelmed him although the London below is similar to the London above he was accustomed to. Both are melting pots of diverse personalities. However, London Below existed as an alternative world to everything that was discarded from the city above; it is a place for those who fell through the cracks. Its denizens is an interesting mix of people and creatures with varying personas. They are what one would glean as atypical, ones that we typically pass by on the streets with nonchalance. Because of the premise of the place, London Below reminded me of the fictional place in a Cecilia Ahern novel where lost things go.

The premise of the novel’s plot is interesting to say the least. At its heart, it is a fantasy novel laced with elements of suspense and adventures. The centrifugal point of the story is a daughter’s indomitable resolve to seek justice for her slain father. There are additional subplots as well such as an ordinary man’s challenges in coping to a different world, a convicted criminal’s pledge to fulfill a promise and an angel’s last-ditch effort to salvage a city that he has sworn to protect. All of these subplots converge to provide an entertaining read. However, it is inevitable that there are some plot holes here and there.

What stood out for me in the story is Gaiman’s extraordinary grasp of the supernatural and the magical. Because of this, he was able to weave a setting that is eerily magical albeit bereft of any opulence. His depiction of London Below is impeccable to say the least. He possesses that knack for describing even the most minute details. In spite of the gloomy and grotesque atmosphere (it is underground after all), Gaiman was able to portray a believable setting. But it is these idiosyncrasies and grotesqueries that make London Below special, out of this world.

“When angels go bad they are worse than anyone else. Remember Lucifer used to be an angel.” ~ Neverwhere, Neil Gaiman

Moreover, Gaiman made the novel speak in a tone that is not overbearing. It is built around a sprawling world of darkness but it is laced with light that guided the story and made it move forward. And did I forget to mention that the story contains a bevy of dark and heavy subject matters such as betrayal, murder and assassination, and of course, Messrs. Croup and Vandemar. Narcissism, to some extent, was also portrayed in the story.

As I have mentioned, it wasn’t all about the darkness as the novel alluded to lighter subject matters as well. These positive facets pertain to loyalty, friendship, and the search for salvation and redemption. It is always great reading about how people strive to transform themselves even though it is in a fictional setting. I also liked the fact that the novel is a collection of skewed characters, physically and morally. It is not you usual collection of barbie-doll and honey-coated personalities. Somehow, it is easier to relate to characters who are aware of their imperfections and who consciously try to live by it. Gaiman did a commendable job in developing the different and colorful characters who populate London Below.

On a different note, I do lament the way the story ended; it was satisfactory. Moreover, most of the subplots were not even resolved in the end. It kind of reminded me of how Haruki Murakami resolves his literary pieces. However, in the case of Neverwhere, the lack of resolution was suggestive of a sequel. Gaiman, in the introduction, however, mentioned that he never writes sequels. But London Below is a world he is hoping to return to. I hope that he does.

Metaphors failed him, then. He had gone beyond the world of metaphor and simile into the place of things that are, and it was changing him.”  ~ Neverwhere, Neil Gaiman

But in spite of the muddled resolutions, I nevertheless enjoyed Neverwhere. It is not as complicated and as powerful as American Gods is but it did enough to fascinate me and keep me hooked from start to finish. It is a quick read and a lighter one filled with a myriad of unique characters. Moreover, London Below is a fascinating world; trash to some but in this heap of trash is a treasure trove of tales, magical, fascinating, riveting. But is Neverwhere worth your time? Of course, it is the right mix of suspense, adventure and glitters of romance.

P.S. Islington bothered me somehow but since I came from a trilogy where angels played a major role, I came to accept his presence. What I find ironic though is that Islington was portrayed in the same manner the angels of His Dark Materials were portrayed.

Recommended for readers of fantasy and magical novels, readers who like suspenseful stories, those who like imperfect characters and settings, those who have a wide imagination, readers who are looking for a quick and pleasurable read, those who are into young adult fiction, and devout followers of Neil Gaiman.

Not recommended for readers who dislike dark subjects, and readers who prefer stories with complete resolution. 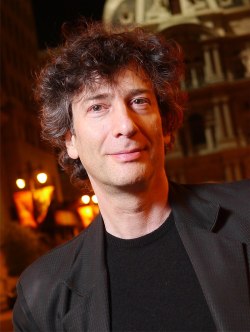 As a child, Gaiman has a passion for reading. A wide reader, he has read classical works like J.R.R. Tolkien’s The Lord of the Rings, Lewis Carroll’s Alice’s Adventures in Wonderland and C.S. Lewis’ The Chronicles of Narnia. In the early 1980s, he pursued journalism in the hope of getting connected well enough so that his works will get published. In May 1984, his first short story Featherquest was pubished in Imagine Magazine. In the same year, he wrote a biography of the band Duran Duran, his first book. However, before publishing novels, Gaiman first entered the world of comics, with his first comic strips published in 1986-87

In 1990, in collaboration with fellow novelist Terry Pratchett, Gaiman was finally able to publish his very first novel, Good Omens. Neverwhere (1996) was Gaiman’s first solo novel. He followed it up with Stardust (1999). However, it was American Gods (2001) that made him a household name. It has earned him numerous awards as well such as Hugo Awards and Locus Awards. Gaiman’s other works include Coraline (2002), The Graveyard Book (2008) and Anansi Boys (2005).

Aside from novels, he has published tons of comic strips, short stories, and nonfiction books. He also explored the world of writing screenplays. He currently resides in Menomonie, Wisconsin. He is also residing in Cambridge, Massachusetts.