San Piedro Island, north of Puget Sound, is a place so isolated that no one who lives there can afford to make enemies. But in 1954 a local fisherman is found suspiciously drowned, and a Japanese American named Kabuo Miyamoto is charged with his murder.

In the course of the ensuing trial, it becomes clear that what is at stake is more than one man’s guilt. For on San Piedro, memory grows as thickly as cedar trees and the fields of ripe strawberries – memories of a charmed love affair between a white boy and the Japanese girl who grew up to become Kabuo’s wife; memories of land desired, paid for, and lost. Above all, San Piedro is haunted by the memory of what happened to its Japanese residents during World War II, when an i=entire community was sent into exile while its neighbors watched. Gripping, tragic, and densely atmospheric, Snow Falling on Cedars is a masterpiece of suspense – but one that leaves us shaken and changed.

Asian-Americans and A Whole Lot of Cedars

When I picked up David Guterson’s Snow Falling on Cedars, it was purely out of curiosity. I have never heard of Guterson or any of his works before. However, the book’s title was enough to pique my interest; it was one of those random books I picked with the hopes of being transported into a wonderful and magical place. To take a breather from the colossal works that I have been immersing lately, I opted to go for Snow Falling on Cedars.

Set on a fictional island in the northern Puget Sound region of Washington state in 1954, the story is fringed on a murder case involving Kabuo Miyamoto. A Japanese-American, Miyamoto was accused of murdering his fellow fisherman, Carl Heine. In a sensational case, all possible trump cards are used by both the defendant and the accused. But there is more to the story than just of mere death. The story converges into a junction of star-crossed lovers, family feuds, and even bitter history.

The premise of the story was interesting – there is an interplay of different subplots from romance to suspense. It contains varying undertones with the murder case as its primary plot driver. However, even before the trial started, Kabuo was already judged. It is also easy to see why Kabuo might be convicted – he had motive, opportunity and a pile of circumstantial evidence. More than these, Japanese Americans were regarded with hostility shortly after World War II. The undercurrents of racism were hemmed in to the narrative.

“None of those other things makes a difference. Love is the strongest thing in the world, you know. Nothing can touch it. Nothing comes close. If we love each other we’re safe from it all. Love is the biggest thing there is.” ~ David Guterson, Snow Falling on Cedars

Guterson utilized flashbacks as another plot device to keep the readers riveted. Through these backstories, the readers are given an intimate peek into the minds and motivations of the characters. The flashbacks were harmoniously arranged so as not disrupt to the flow of the story.

The novel also dipped into a plethora of subjects such as the consequences of war and the search for identity. There were also talks about changes of alliance. One of the novel’s best attributes is how it aptly depicted the nuances of the legal system. Fused into the narrative are fabrics of the Japanese culture. The predictability that the story was doused with destroyed the suspense. For a story that tried to hypnotize the readers with its endless curves, the ending was anticlimactic.

Although Carl Klein died in the waters of San Piedro, it is the cedar trees that has laid witness to numerous (non) critical events in the story. The stories the cedar trees witnessed are a mixture of the euphoric and the melancholic. Under its shades, people fell in love, swore their loyalty, and swore their allegiance. There was a repetitive ring to it that it started sounding like a broken tape; the cedar trees were mentioned repeatedly it has become burdensome.

The story is riddled with numerous dramatic antics, especially the courtroom scenes. Kabuo was very inconsistent with his statements, pushing and pulling, often retracting his statements. The lawyers kept asking him why he withheld the truth but Guterson bought him time by arranging the discourses in a manner that Kabuo didn’t have to “actually” answer the questions. Towards the end of the narrative, a critical piece of evidence was uncovered but Guterson bided his time in delivering the evidence to the judge. This unnecessarily stretched the story for thirty more pages.

“To deny that there was this dark side of life would be like pretending that the cold of winter was somehow only a temporary illusion, a way station on the way to the higher “reality” of long, warm, pleasant summers. But summer, it turned out, was no more real than the snow that melted in wintertime.” ~ David Guterson, Snow Falling on Cedars

The last statement in the previous paragraph summarizes what I deemed was the biggest issue in the narrative. Guterson was impeccable in his descriptions but on the other hand, he filled the narrative with mind-numbing details. He kept pounding the readers with pointless details and backstories. Its verbose quality watered down the other elements of the story, at times the plot has become (very) predictable. Heavy foreshadowing lessened the impact of the story’s denouement.

For all its faults, the narrative nevertheless possessed a lyrical quality. It exhibited the wonderful qualities of Guterson’s writing. Guterson was generous in conjuring an atmospheric ambiance that resonates all throughout the story. This ambiance catapulted the story and gave a sense of place and of time that evokes feelings and nostalgia and awakens the senses:

“Center Valley’s strawberry fields lay under nine inches of powder and were as fuzzy through the snowfall as a landscape in a dream, with no discernible hard edges. On Scatter Springs Drive the trees had closed the road in so that the sky was little more than an indistinct, drab ribbon overhead, but down here the dramatic expanse of it was visible, chaotic and fierce. Looking out past the windshield wipers Ishmael saw billions of snowflakes falling in long tangents, driven southward, the sky shrouded and furious.”

“He didn’t like very many people any more, or very many things either. He preferred not to be this way, but there it was, he was like that. His cynicism, a veteran’s cynicism, was a thing that disturbed him all the time.” ~ David Guterson, Snow Falling on Cedars

Snow Falling on Cedars is a dense novel dealing with the subject of prejudice at a critical period when of Asian-American relationship. However, the story could have used some literary slimming down to tighten the narrative. Its flaws overshadowed its subtler elements. By the last few pages of the novel, I was burdened by its predictability that I was just waiting for something to happen, to change my opinion of it; it didn’t happen.

It is a lukewarm novel; it wasn’t an entirely bad novel, but it wasn’t that fully satisfying as well. 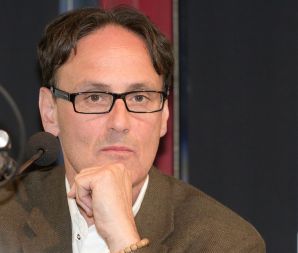 (Photo by Wikipedia) David Guterson was born on May 4, 1956 in Seattle, Washington.

He attended Seattle Public Schools and went to Roosevelt High School. He earned his Bachelor of Arts in English Literature at the University of Washington. He earned his Master of Fine Arts degree in creative writing at the same university.

For 10 years, Guterson worked as a teacher at Bainbridge High Schoool. While teaching, he begun writing essays, and short stories which he had published in non-mainstream magazines and periodicals. He later sold some of his works to more renowned magazines such as Esquire, Sports Illustrated, and Harper’s Magazine. His first published book, he Country Ahead of Us, the Country Behind (1989), is a short story collection. Meanwhile, his second work, Family Matters: Why Homeschooling Makes Sense (1992) is a collection of essays.

But it was Guterson’s third work, and first novel, Snow Falling on Cedars that gave him his biggest literary breakthrough. Published in 1994, it romped on to win the 1995 PEN/Faulkner Award. The book was also adapted into a movie in 1999. Guterson’s subsequent works include East of the Mountains (1999), Our Lady of the Forest (2003), and The Other (2008).

He is a Guggenheim fellow and is a co-founder of Field’s End, an organization for writers. He is married to Robin Guterson and the couple has five children. Guterson currently lives on Bainbridge Island in Puget Sound, Washington state.