Twelve-year-old Marwand’s memories from his previous visit to Afghanistan six years ago center on his contentious relationship with Budabash, the terrifying but beloved dog who guards his extended family’s compound in the rural village of Logar. But eager for an ally in this place that is meant to be “home,” Marwand misreads his reunion with the dog and approaches Budabash the way he would any pet on his American suburban block – and the results are disastrous: Marwand loses a finger, and Budabash escapes into the night.

Marwand is not chastened and doubles down on his desire to fit in here. He must get the dog back, and the resulting search is a gripping and vivid adventure story, a lyrical, funny, and surprisingly tender coming-of-age journey across contemporary Afghanistan that blends the bravado and vulnerability of a boy’s teenage years with an homage to familial oral tradition and calls to mind One Thousand and One Nights yet speaks with a voice all its own.

Growing up in Colorful Afghanistan

One of the books I included in the list is Jamil Jan Kochai’s debut work, 99 Nights in Logar. In spite of its low rating in Goodreads, I took a leap of faith because of its interesting premise. Thankfully, availing a copy of the book wasn’t as challenging as I initially thought. Without further ado, I immediately delved into the novel, making it the third book I read for the year.

The story follows the adventure of twelve-year-old Marward, who, after six years, is visiting his hometown, Logar in Afghanistan. His first visit was marked by fond memories of the bond he formed with his family’s dog, Budabash. Expecting a very warm welcome from his friend, he approached Budabash with open arms but was shocked beyond belief when he was greeted not by warmth but by gnashing teeth. Marwand lost a finger while Budabash leapt into the comforts of the darkness. Marwand and his cousins then set out to search for their estranged dog. What ensued is an adventure of a lifetime with the hinterlands of Afghanistan as its backdrop.

“Our prayers are like gems for the souls that have passed.” ~ Jamil Jan Kochai, 99 Nights in Logar

Honestly, I am a big fan of literary pieces written by Afghan authors; they have always fascinated me. The works of Khaled Hosseini and Nadia Hashimi greatly impressed me – what they painted is a picture of Afghanistan that is beyond its current war-torn state. It is with the same impression that I looked forward to 99 Nights in Logar.

Marwand is the heart and soul of the novel. The story’s centrifugal point are his adventures, his perspectives, and his growth. Kochai lent him a very believable and relatable voice with hints of maturity that becomes more palpable as the story moves along. At some points of the story, Marwand reminded me of The Kite Runner’s Amir. But, of course, Kochai didn’t try to mimic that of his senior as Marwand could not be a whole world different from Amir.

But the novel is more than just a coming-of-age tale. Hemmed into the tapestry of the narrative is the search for identity and the longing for acceptance. On many a level, the narrative’s message resonates to those of us who moved (whether voluntary or forced) to another region and consider it their home.

The novel is a loose adventure novel, this part of the story being limited. On a bigger picture, the novel placed a proverbial microscope on Afghan family life. However, Kochai did nothing to make Marwand’s family a more distinct voice. The story’s depiction of Afghan family life is very textbook. Due to Afghanistan’s patriarchal culture, it is often concluded that the male is always dominant in decision-making. However, as depicted in books, including this one, it is the opposite that is true.

“From the rooftop, the bombs didn’t just rumble, they lit up the mountains, glowing out across the landscape in a red so pale it was almost orange, or pink, sending in first a sharp scream and then a thundering note which over at Moor’s house might’ve dulled one to sleep.” ~ Jamil Jan Kochai, 99 Nights in Logar

One of the novel’s strongest suits is its immersion and its characters. Kochai made sure the readers are involved in the story by creating interesting and realistic characters who are as colorful as the place the story is set in. Jawed the Thief is particularly interesting; he lent the story a fairytale-like quality. It also felt like he was the only one who knew what was happening. The conversational quality to the interactions made it easier to appreciate the story.

Though it is his debut work, Kochai channeled the rich Afghan tradition of being able to paint through words vivid pictures of Afghanistan, its people, culture and history. Staple elements of contemporary Afghan storytelling are present – the unending Afghan occupation, Islam and the Taliban. Kochai also outlined the political situation with the American occupation.

One element of Afghan culture was particularly highlighted. Kochai weaved together a tapestry of amusing myths, legends and lore, highlighting the Afghans’ propensity for storytelling. Talent for inventiveness and creativity is highly valued. Although they were treated as sources of entertainment, these stories are vessels upon which culture, history and wisdom are expressed and passed on.

“During the whole length of the battle, I was scared of hiding and becoming caught. Of running and being hit. Of shooting and becoming a killer. And all my fears warred inside of me, until they massacred one another, so that it wasn’t courage that let me fight, but the death of my fear.” ~ Jamil Jan Kochai

99 Nights in Logar was simply outstanding in its depiction of Afghanistan’s tragic past and present as shown through the eyes of a young boy. However, its flaws loomed bigger than its small victories. The story, although colorful, was mostly disorganized and loose at some ends. Moreover, the use of several Afghan colloquial terms makes it imperative to have internet handy. This was a challenge that hampered my appreciation of the story. At the end of the novel, a letter completely written in Pashto, left a confusing impression. No translation whatsoever was given. I am not sure if this was deliberate.

I could have rated the story higher if it wasn’t for these flaws; the story and the storytelling were both good. For a debut work, Kochai did well. I can’t wait for what more he has in store. 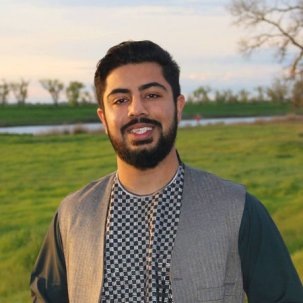 Kochai grew up in the United States and completed his Masters in English at University of California Davis. His story, Nights in Logar, won the 2018 O. Henry Prize. This story laid the grounds for his debut novel, 99 Nights in Logar which was published in January 2019.

Several of his works have been published in Ploughshares, A Public Space, The O. Henry Prize Stories 2018 and is forthcoming in the Sewanee Review. He was also a Truman Capote Fellow at the Iowa Writer’s Workshop.