After losing momentum due to six months of inactivity, I have resolved to turn 2019 around by picking up my hiking shoes and embarking on as many hiking trips as I could. After the successful conclusion of my first hike for the year in Tarlac’s San Jose Circuit, I booked my next hiking adventure without further ado. Now, the challenge is choosing one that would suit me. It didn’t take long though before I chose one: Tanay, Rizal’s Mt. Mapalad.

Its proximity to the Sierra Mountain ranges made Tanay, Rizal slowly evolve into one of the country’s premier hiking destinations. The growing number of trails being opened for hiking activities is exponential. The latest addition to these new trails is Mt. Mapalad located in Barangay San Andres. Its fairly established trail makes it a conducive hiking destination for both seasoned and amateur hikers.

With me on this hiking adventure is my college friend, Gretchen, who herself is looking to stretch her procrastinating muscles. It couldn’t be more perfect because as time passed by, I have slowly developed an aversion to being a mere solo joiner (*chuckles*). The great weather and my muscles aching for some outdoor adventure, it was all systems go for yet another Tanay, Rizal mountain expedition.

Whilst blanketed by the dark starry skies, our organized climb set out for Tanay, Rizal. We departed early and reached the barangay hall at around 3 AM. It was no surprise to see a score of hikers converging in Barangay San Andres. It is also home to renowned hiking destinations like Mt. Batolusong (yes, Erich, we hear you), and Mt. Ayngat. As our organizer was busy coordinating with the barangay officials to ensure an uneventful climb, we prepared our things, and ourselves for the day’s adventure.

After completing the obligatory pre-climb rituals, our adventure commenced at around 4 AM. Contrary to traditional Mt. Mapalad hiking trails, our group opted to take the traverse trail. The first thirty minutes of the trek comprised of simply tracing the riverbanks and navigating through the local village trail. It was a pleasant start and wasn’t too overbearing.

The real challenge began when we were on the cusp of the mountain slopes. The village trail transformed into a bamboo path, a trail I am too familiar with having climbed several of Tanay’s mountain. Apart from the steepness, the loose soil posed a huge challenge. It was palpable that the trail was just recently established. Thankfully, bamboo railings were put in place to caution the hikers.

About an hour and a half into our journey, we reached the summit. False alarm. What we reached is the topmost part of the mountain opposite Mt. Mapalad’s summit. To get to the real summit, we have to walk for another thirty minutes. As it was still dark, we stopped to take a break. This part of the mountain is very bare, offering us no protection against the biting cold that greeted us that January dawn. Apart from the grasses, there were very little trees. Too bad I didn’t bring my jacket; I felt naked against nature’s forces.

After enduring about thirty minutes of cold and wind, we resumed our march towards the summit. The trail, from steep, turned to flat once again. Instead of trees, we were shrouded by tall grasses, reminiscent of Mt. Maynuba’s and Mt. Batulao’s trails. There were parts of the trail that dipped down, hence, caution is still advised. Some of our fellow participants slipped on some part of the trail that is still damp from the early morning dew.

We reached the other side of the mountain after about 30 minutes of navigating the grasslands. Before heading out to the summit, we rested on the huts of stores that are located near the summit. Some had their breakfast while some had a cup of coffee. It was still early out; the darkness is slowly turning into a grayish hue that is the prelude to the sun’s brighter colors. There were already a lot of hikers heading to the summit. Mt. Mapalad, a relatively new hiking destination, has certainly caught the attention of many a hiker.

At the summit, there was already a crowd. The two picture-taking platforms were filled to the brim. Our guides had to go on queue first before we can have our pictures be taken on these platforms which take on the form of a human palm. Please take note that the upper platform is exclusively for group pictures; no solo pictures allowed. The lower platform, on the other hand, is purely for solo pictures.

While waiting for our turn, my companions and I explored the area. The summit is uncharacteristically spacious, unlike, say Mt. Daraitan’s. It has also some limestone rock formations with jagged edges. These rock formations characterize most of Tanay’s mountains. And where there are rock formations, we are always there, prepared to take pictures.

Having climbed a couple of mountains, I can say that there is nothing mesmerizing about the summit. The projected sea of clouds didn’t happen, and the thick clouds shrouded what could have been a majestic sunrise. But as they say, it is always about the journey, and the journey is a good one. But still the view of the Sierra Madres, as always, is captivating.

The other dampener when climbing Mt. Mapalad is the crowd and the queue when waiting for one’s turn to have his picture be taken at the two platforms. Having one’s picture be taken on the lower platform is like performing a stage act as the mountainside is filled with climbers who are also waiting for their respective turns. At 750 MASL, it is a conducive trek for new hikers. The transforming trail also offers a glimpse of the typical Tanay mountain trail.

When we’ve had all our pictures be taken, we proceeded with the descent. As this is the traverse, we used the traditional trail to descend. It is more technical than our ascent as we had to climb down the track of a waterfalls. Thankfully, there wasn’t much water falling. But one must still practice extreme caution as the damp trail is slippery.

The lead group completed the climb about an hour before lunch time, an early but awesome start to the day. 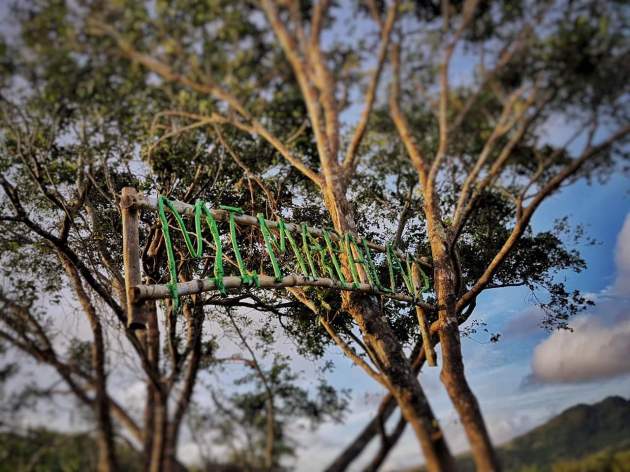 P.S. Pardon the low-quality and pixelated pictures.  My phone was recently stolen. It had all the original copies of these pictures. These pictures were downloaded from Gretchen’s Facebook account, hence, the distorted quality.

4 thoughts on “Weekend Off: Mt. Mapalad”