February 18, 1931. The world was gifted with one of its greatest writers. Chloe Ardelia Wofford was born to a working-class, African-American family in Lorain, Ohio. From her humble beginnings, she would go on and conquer the world stage with her powerful and vivid prose. The world would come to know her as Toni Morrison.

As a young child, Toni (derived her baptismal name, Anthony) Morrison, has exhibited love for literature, indulging in the seminal works of Leo Tolstoy and Jane Austen. Her literary acuity is displayed in her works like The Bluest Eye, Song of Solomon, Sula and her Pulitzer Prize-winning work, Beloved.

Her hard works paid off as she got recognized on the global stage. Dozens of literary accolades culminated with a Nobel Prize in Literature victory. Morrison is the first African-American woman to win the prestigious award. But Morrison was more than just your typical author; Morrison was the voice of the ordinary black woman. She was an advocate and her works were brimming with her beliefs.

Morrison recently passed away. As the world mourns her loss, I have rounded up some of her most memorable and inspiring quotes. She lived by and with words and it is words and with words that I choose to celebrate her legacy, a tiny spark that beacons in the midst of darkness.

“Sweet, crazy conversations full of half sentences, daydreams and misunderstandings are more thrilling than understanding could ever be.”
~ Toni Morrison

“I tell my students, ‘When you get these jobs that you have been so brilliantly trained for, just remember that your real job is that if you are free, you need to free somebody else. If you have some power, then your job is to empower somebody else. This is not just a grab-bag candy game.” ~ Toni Morrison

“There is a loneliness that can be rocked. Arms crossed, knees drawn up, holding, holding on, this motion, unlike a ship’s, smooths and contains the rocker. It’s an inside kind–wrapped tight like skin. Then there is the loneliness that roams. No rocking can hold it down. It is alive. On its own. A dry and spreading thing that makes the sound of one’s own feet going seem to come from a far-off place.”  ~ Toni Morrison 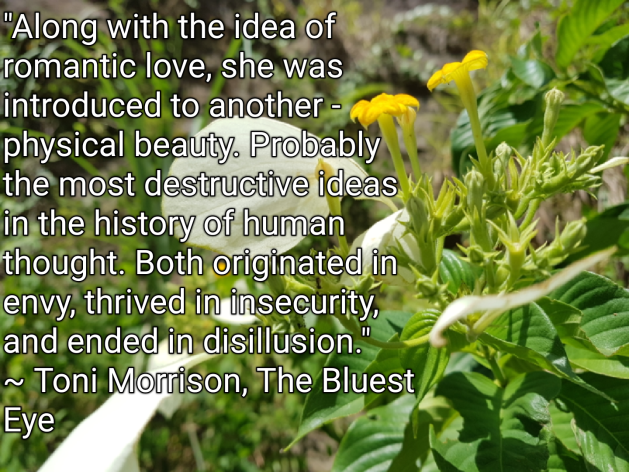 “Along with the idea of romantic love, she was introduced to another – physical beauty. Probably the most destructive ideas in the history of human thought. Both originated in envy, thrived in insecurity, and ended in disillusion.”
~ Toni Morrison

“She is a friend of mind. She gather me, man. The pieces I am, she gather them and give them back to me in all the right order. It’s good, you know, when you got a woman who is a friend of your mind.” ~ Toni Morrison 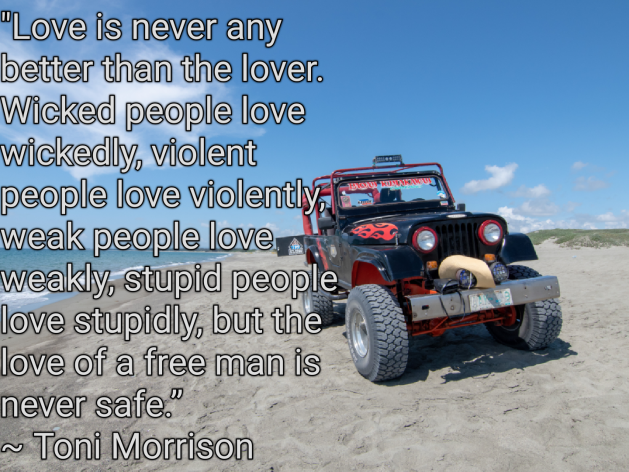 “Everything I’ve ever done, in the writing world, has been to expand articulation, rather than to close it.” ~ Toni Morrison

“Lonely, ain’t it? Yes, but my lonely is mine. Now your lonely is somebody else’s. Made by somebody else and handed to you. Ain’t that something? A secondhand lonely.” ~ Toni Morrison 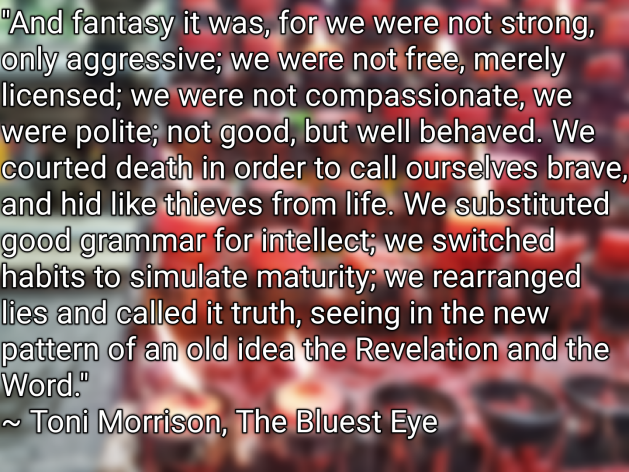 “And fantasy it was, for we were not strong, only aggressive; we were not free, merely licensed; we were not compassionate, we were polite; not good, but well-behaved. We courted death in order to call ourselves brave, and hid like thieves from life. We substituted good grammar for intellect; we switched habits to simulate maturity; we rearranged lies and called it truth, seeing in the new pattern of an old idea the Revelation and the Word.”
~ Toni Morrison

“All paradises, all utopias are designed by who is not there, by the people who are not allowed in.” ~ Toni Morrison

“Writing is really a way of thinking–not just feeling but thinking about things that are disparate, unresolved, mysterious, problematic or just sweet.” ~ Toni Morrison 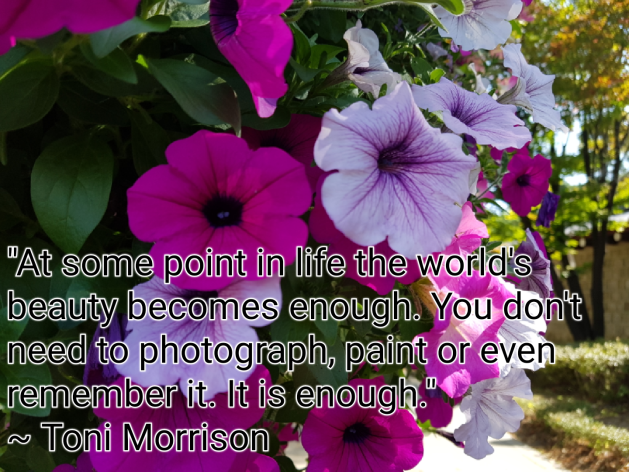 “At some point in life the world’s beauty becomes enough. You don’t need to photograph, paint or even remember it. It is enough”
~ Toni Morrison

“Certain seeds it will not nurture, certain fruit it will not bear and when the land kills of its own volition, we acquiesce and say the victim had no right to live.” ~ Toni Morrison

“They seemed to have taken all of their smoothly cultivated ignorance, their exquisitely learned self-hatred, their elaborately designed hopelessness and sucked it all up into a fiery cone of scorn that had burned for ages in the hollows of their minds – cooled – and spilled over lips of outrage, consuming whatever was in its path.”
~ Toni Morrison

“I had only one desire: to dismember it. To see of what it was made, to discover the dearness, to find the beauty, the desirability that had escaped me, but apparently only me.” ~ Toni Morrison 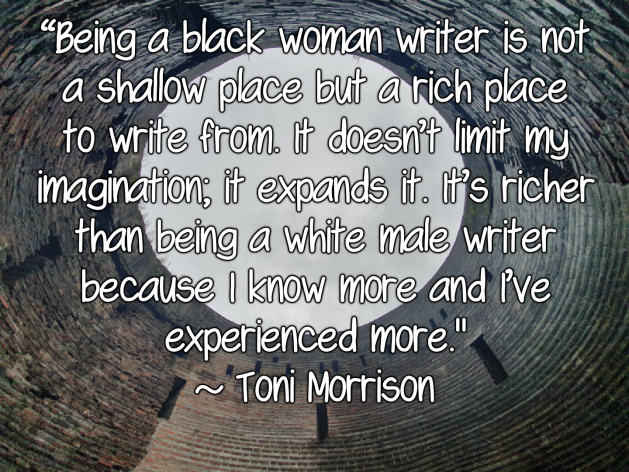 “Being a black woman writer is not a shallow place but a rich place to write from. It doesn’t limit my imagination; it expands it. It’s richer than being a white male writer because I know more  and I’ve experienced more.”
~ Toni Morrison

“I’m always annoyed about why black people have to bear the brunt of everybody else’s contempt. If we are not totally understanding and smiling, suddenly we’re demons.” ~ Toni Morrison

“The ability of writers to imagine what is not the self, to familiarize the strange and mystify the familiar, is the test of their power.” ~ Toni Morrison

“I merged those two words, black and feminist, because I was surrounded by black women who were very tough and and who always assumed they had to work and rear children and manage homes.” ~ Toni Morrison

How about you fellow reader, what Toni Morrison quote made an impression on you? Share it in the comment box.