The Slave Trade and its Tentacles

The slave trade will remain one of the darkest phases of the American Deep South’s history. The two have almost become synonymous, and are deeply embedded both in history and in literature. One of the most fabled elements of the slave trade is the Underground Railroad. It is a series of secret routes and safe houses established all over the United States and was used by slaves to escape into the free states and/or Canada.

Inspired by the important role the Underground Railroad played in the Deep South’s history, Colson Whitehead conjured a masterpiece, The Underground Railroad. The modern masterpiece would go on and win both the Pulitzer Prize and the National Book Award, an unprecedented feat which was last achieved in  1993 by E. Annie Proulx’s The Shipping News.

Whitehead’s re-imagination of the The Underground Railroad is set during the antebellum era. The narrative started in the Randall’s plantation in Georgia where a lave named Cora was toiling the plots. On the cusp of womanhood, she was abandoned by her mother, Mabel. Virtually an outcast, her future looks bleak. Her perspective begun to change with the arrival of a new slave, Caesar. With persistence, Caesar managed to convince Cora to join him in fleeing their captors through the Underground Railroad.

“And America, too, is a delusion, the grandest one of all. The white race believes–believes with all its heart–that it is their right to take the land. To kill Indians. Make war. Enslave their brothers. This nation shouldn’t exist, if there is any justice in the world, for its foundations are murder, theft, and cruelty. Yet here we are.” ~ Colson Whitehead, The Underground Railroad

The Underground Railroad of Whitehead’s imagination is more than just an allegory. It is a physical manifestation. It is a literal locomotive that is complete with a conductor and stations that are incognito from plain sight. Whitehead transformed what once metaphorical into a reality. The network of abolitionists who stealthily ferries slaves from south took a more prominent shape.

Cora’s flight, however, is fraught with dangers. Once they arise from the undergrounds, they were surrounded by harsh realities. Hot on their tails are slave catchers who are not resting their laurels until the escapees are captured, brought back to their owners, and punished for their insolence. What ensues is a cat and mouse chase that traverses the scenic but painstaking underground railroad route. The flee from slavery turns into a pulsating, and at times, desperate, chase for freedom in a promised land where men once traveled to in order to escape similar fate.

Through her journey, Cora came face to face with the the different masks the horrors of slavery is hidden. Whitehead subtly but vividly portrayed how each state responded to the slave trade, or to how some would refer it, the “negro problem”. Underneath the pristine exteriors are the ghastly realities buried in a superficial veneer. At one time, Cora was forced to live an Anne Frank-like existence in an attic. In between these journeys are body snatchers, conflicted abolitionists and night riders, vestiges of the past that the south was once wrapped in.

“Poems were too close to prayer, rousing regrettable passions. Waiting for God to rescue you when it was up to you. Poetry and prayer put ideas in people’s heads that got them killed, distracting them from the ruthless mechanism of the world.” ~ Colson Whitehead, The Underground Railroad

Whitehead’s visuals, especially at the start, was startling. He had a knack for capturing the reader’s imagination with the sharpness of his words and the vividness of his descriptions. The rough contours of the American south came alive through Whitehead’s writing. More than the allegorical railroad itself, it was Whitehead’s writing and storytelling prowess that elevated the novel.

The Underground Railroad maybe an intersection of several historical fiction but Whitehead’s prose take its own distinct shape. Waving his literary wand, his powerful writing gave life to a colorful narrative, pushing it beyond its boundaries and making it a literary tour de force. Overall, the execution was clinical and straightforward. It was too clinical, in fact, that the novel was bereft of finesse. With the powerful writing came the rough edges. It could have used some smoothing out.

Too much emphasis was placed on the novel’s main subject that Whitehead forgot one major element in the novel – the characters. Most of the secondary characters are underdeveloped and barely made any deep impressions worthy of remembrance. Cora, as a main character, also lacked personality and development. She was ephemeral and was more of Caesar’s silhouette than an actual person. Caesar was even less developed.  A first person point-of-view would have given some levels of intimacy and connection between the reader and the characters.

“The music stopped. The circle broke. Sometimes a slave will be lost in a brief eddy of liberation. In the sway of a sudden reverie among the furrows or while untangling the mysteries of an early morning dream. In the middle of a song on a warm Sunday night. Then it comes, always – the overseer’s cry, the call to work, the shadow of the master, the reminder that she is only a human being for a tiny moment across the eternity of her servitude.” ~ Colson Whitehead, The Underground Railroad

Cora’s journey is pulsating but the novel’s most powerful message is imbued in its ending. Whitehead’s knack for poignancy came through in the book’s closing pages. In a luminous conclusion, Whitehead looks further backward, to the genocide of the Native Americans to further underline  the book’s subtle but powerful message. As one character puts it, “America, too, is a delusion, the grandest one of all. The white race believes – believes with all its heart – that it is their right to take the land.”

In The Underground Railroad, Whitehead transports the readers to one of the darkest phases of Deep South history. Whilst it was set in the past, the book’s message reverberates to the current times, where racial tensions are still escalating and are still prevalent in every nook and cranny. The Underground Railroad is a narrative brimming with promise and glimmer of hope.

Historical fiction has never failed to deliver. This is the nth time I am reading about the black slave trade and the American Deep South but never once did I feel hampered by the story or by the familiarity of the elements. Rather, I was engaged by Whitehead from the onset. It did help that it was the first time I have heard of the Underground Railroad. The story had my attention and interest.

The only gripe I have with the book is the characterization, especially with the secondary characters. I guess the perspective was the main issue. The characters felt ephemeral and barely made any impact. The writing, whilst generally faultless, lacked some finesse. Nevertheless, it was still an insightful and powerful read.

Cora is a young slave on a cotton plantation in Georgia. An outcast even among her fellow Africans, she is on the cusp of womanhood – where greater pain awaits. And so when Caesar, a slave who has recently arrived from Virginia, urges her to join him on the Underground Railroad, she seizes the opportunity and escapes with him.

In Colson Whitehead’s ingenious conception, the Underground Railroad is no mere metaphor: engineers and conductors operate a secret network of actual tracks and tunnels beneath Southern soil. Cora continues her harrowing flight state by state, encountering, like Gulliver, strange yet familiar iterations of her own world at each stop. As Whitehead brilliantly re-creates the terrors of the antebellum era, he weaves in the saga of our nation, from the brutal abduction of Africans to the unfulfilled promises of the present day. The Underground Railroad is the gripping tale of one woman’s will to escape the horrors o bondage – and a powerful meditation on the history we all share. 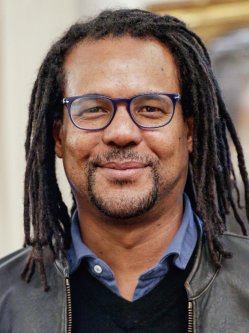 Colson Whitehead was born on November 6, 1969 in New York City, New York. He grew up in Manhattan and attended the elite prep Trinity School.

After graduating from Harvard University in 1991, Whitehead wrote for The Village Voice. While working for the Voice, he started drafting his first novels. His first novel, The Intuitionist was published in 1999. It was followed by John Henry Days (2001), Apex Hides the Hurt (2006), Sag Harbor (2009) and Zone One (2011). Whilst he’s had a fine run, it wasn’t until The Underground Railroad’s publication in 2016 did Whitehead become a household name. It also won the 2016 National Book Award and the 2017 Pulitzer Prize for Fiction. His eighth novel, The Nickel Boys was published in 2019.

Whitehead has also nonfiction works like The Colossus of New York (2003), and The Noble House: Poker, Beef, Jerky & Death (2014). His essays and short stories were also published in various newspapers and magazines such as The New York Times, Granta, and Harper’s. He has also taught in a score of universities and colleges across the US. He was also a Writer-in-Residence at Vassar College,  the University of Richmond, and the University of Wyoming.

Whitehead currently lives in Manhattan and is married to a literary agent. The couple has two children.