Goodreads Monday is a weekly meme that was started by @Lauren’s Page Turners. This meme is quite easy to follow – just randomly pick a book from your to-be-read list and give the reasons why you want to read it. It is that simple.

The Shadow of the Wind by Carlos Ruiz Zafón 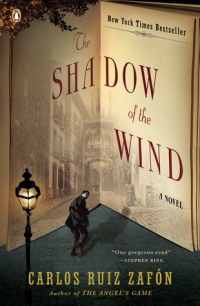 Barcelona, 1945. Just after the war, a great world city lies in shadow, nursing its wounds, and a boy named Daniel awakes on his eleventh birthday to find that he can no longer remember his mother’s face. To console his only child, Daniel’s widowed father, an antiquarian book dealer, initiates him into the secret of the Cemetery of Forgotten Books, a library tended by Barcelona’s guild of rare-book dealers as a repository for books forgotten by the world, waiting for someone who will care about them again. Daniel’s father coaxes him to choose a volume from the spiraling labyrinth of shelves, one that, it is said, will have a special meaning for him. And Daniel so loves the novel he selects, ‘The Shadow of the Wind’, by one Julian Carax, that he sets out to find the rest of Carax’s work. To his shock, he discovers that someone has been systematically destroying every copy of every book this author has written. In fact, he may have the last one in existence. Before Daniel knows it his seemingly innocent quest has opened a door into one of Barcelona’s darkest secrets, an epic story of murder, magic, madness and doomed love. And before long he realizes that if he doesn’t find out the truth about Julian Carax, he and those closest to him will suffer horribly.

Why I Want to Read It

I bought Carlos Ruiz Zafón‘s The Shadow of the Wind about three years ago. I’ve always told myself to read it but I never got around it. What initially drew me into the book was its interesting title and book cover. During the time I bought, I was at a juncture where I want to broaden my reading horizon.

Three years later, the book is still gathering more dust in my bookshelf because I never got around to my self-imposed promise to read it. But this year I want to change that, hence, I will include it in my 2020 Top 20 Reading List (which I am still currently drafting).

So what changed that made it imperative for me to read the book within the year?

The answer is simple. I came across numerous book blogs which gave very positive feedback on the novel. These commendations came from book bloggers I trust. My interest was piqued before but now more than ever. I am getting more and more curious with every book review I read about the book. I know it is going to be a great experience and I am looking forward to it this year.