I was born twice: first, as a baby girl, on a remarkably smogless Detroit day in January of 1960; and then again as a teenage boy in an emergency room near Petoskey, Michigan, in August of 1974.

So begins the breathtaking story of Calliope Stephanides and three generations of the Greek-American Stephanides family, who travel from a tiny village overlooking Mount Olympus in Asia Minor to Prohibition-era Detroit, witnessing its glory days as the Motor City, and the race riots of 1967, before they move out to the tree-lined streets of suburban Grosse Pointe, Michigan. To understand why Calliope is not like other girls, she has to uncover a guilty family secret and the astonishing genetic history that turns her into Cal, one of the most audacious narrators in contemporary fiction. Lyrical and thrilling, Middlesex is an exhilarating reinvention of the American epic.

First off, Middlesex is one of the most eye-catching book titles that I have ever encountered. But to be honest, I didn’t have any iota of the book’s existence until recently when I encountered the 1001 Books You Must Read Before You Die. With my curiosity piqued, I tried my best to avail a copy of the book. But alas, my fortunes aren’t holding up until I came across a copy in a local book store. The rest, they say is history.

I really got excited when I was finally able to avail a copy of the book. I have encountered it numerous times in list challenges and made me ask myself numerous questions. Why do readers keep on recommending it? What is this book’s allure that it has become so irresistible? To find out, I lined it up for my 2017 Top 20 Books To Read and as the year is about to draw to a close, I finally got the time to delve in it.

And delve I did.

I have never been swept away by a book before the way Middlesex did. I was just in awe, from the compelling story to the way it was told. There is a boldness to the story that I can barely keep my hands off it. The moment I started reading I just wanted to know how it is going to end. It certainly deserves all the accolades that it got, including that Pulitzer Prize citation. If I were to rank all the nearly 600 books I’ve read over the years, this is one of those on top.

The first thing that really intrigued was the title, Middlesex. I initially believed it was an allusion to rich sexual overtones. However, as I dig into the book, I learned that it is both a place and a state of being. It is name of the Stephanides’ home in Grosse Pointe, Michigan, an indirect reference to the book being a story about the family’s history. It is also a reference to the main character’s circumstances, which is the story’s main theme.

Narrated by Calliope Stephanides, the story’s central theme is genetics, more specifically, hermaphroditism. Calliope is the granddaughter of two Greek immigrants who fled from their hometown in Turkey in the light of the Greek occupation. She grew up believing she was a girl until her teenage years when she felt like she was becoming an anomaly. Entirely by accident, she discovered that she had both male and female attributes. Calliope is a hermaphrodite.

Calliope’s uniqueness is one of the reasons why I immediately fell in love with the book. It is something that is rarely portrayed in modern literature, making the story quite unique. To any reader, hermaphroditism would seem a very disinteresting topic. However, Eugenides kept me turning the pages by a spinning a wonderful and intriguing back story. Although the focal point of the story is hermaphroditism, it also tackled a wide array of topics such as racism, tradition and perhaps most intriguingly, incest. 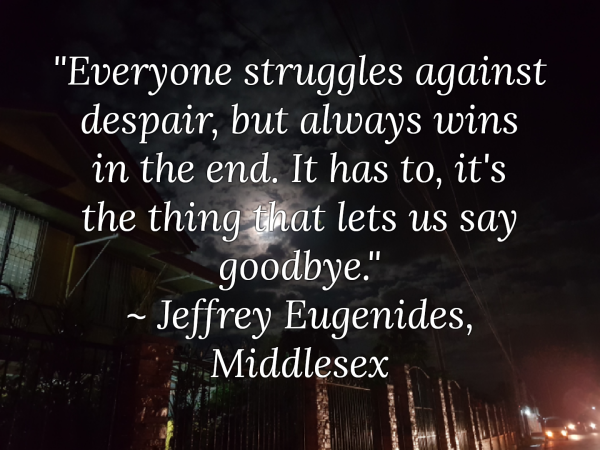 Middlesex realistically portrayed the discrimination towards individuals who are viewed as different. They are called names. They are abused. They are viewed as monstrosities. They are also ridiculed and mocked in public. One of the worst is the circus treatment they get for looking different, as when Calliope and her fellow “freaks” were showcased in private shows to earn money. When laymen look at them, they instantly see an opportunity to earn. It is sad to say that our current society hasn’t moved on yet from such archaic behavior.

But most importantly, the book dealt about rising from these adversities and unfavorable circumstances. Calliope, or Cal as he was called when he opted to live the rest of his life as a man, strived hard to be accepted. His fear of rejection kept him from maintaining one serious relationship, hence, he hopped from one love affair to another. He was afraid that his lovers won’t accept him once they learn the truth. But as the story showed, we just need that one person who accepts us for who we are and then everything will change, for the better that is.

There is definitely no better book to close the year than this modern classic by Jeffrey Eugenides. It had every attribute that makes for a pleasurable and wonderful reading. It had a great story and story line. The story-telling and the writing was impeccable. And most importantly, the reader can easily connect with the main character. Cal isn’t just any figment of imagination. He isn’t just any ordinary narrator. He is a tiny voice in the cavernous abyss within us that tells us to embrace who we are, in spite of what we look like and what others tell.

I’ll never stop praising this book. It is one of the reasons why I keep on searching for the best reads. It is, in its very own right, a contemporary classic. Pulitzer Winner or not, it made an indelible mark in the world of literature. I already have a copy of Eugenides’ Marriage Plot and I’m looking forward to yet another literary roller-coaster ride. I hope I’ll enjoy it as much as I enjoyed Middlesex.

Recommended for readers who enjoy reading something out of the box, who enjoy a nauseating first person point of view story, and who enjoy allusions to Greek traditions and philosophies. 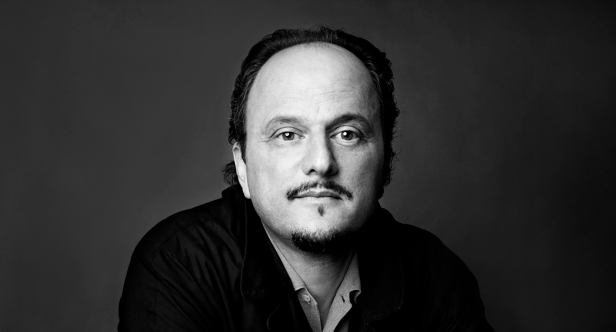 Jeffrey Eugenides is a Pulitzer Prize winning novelist and short story writer. Of Greek, Irish and English origin, he was born on March 6, 1960 in Detroit, Michigan. He took his undergraduate at Brown University due to his desire of studying with John Hawkes, whose works Eugenides admires. Before graduating in 1982, he took a year off to travel across Europe and to volunteer with Mother Teresa in Calcutta, India.

It was during his high school junior year when he decided to become a writer. This was after reading James Joyce’s A Portrait of the Artist as a Young Man. Eugenides closely related to the book’s main character, Stephen Dedalus. In 1993, he successfully published his first novel, The Virgin Suicides. It took him about nine years before publishing his second work, Middlesex, which won the 2003 Pulitzer Prize for Fiction. However, in between his first and second works, he wrote short stories. His third novel, The Marriage Plot, was published in 2011, nine years after Middlesex.

After years of traveling from one place to another, from San Francisco to New York to Berlin, he finally settled down in Princeton, New Jersey with his wife and child. He is currently the Professor of Creative Writing in the Peter B. Lewis Center for the Arts.