In Miss Pinkerton’s Academy for young ladies, the advantaged Amelia Sedley is in stark contrast to the poor, but sharp-witted Becky Sharp. However, fate is not always kind as their lives become entwined with the likes of the coarse bully, Sir Pitt Crawley, his brother, The Rev Bute Crawley, the tyrannical Lady Southdown, the corrupt Lord Steyne, and the loyal William Dobbin.

It is always great to start the reading year with a literary classic that has transcended years.

A few years back, I was planning on enriching my literary acumen resulting to an upsurge in my acquisition of classical works. One such work is William Thackeray’s Vanity Fair which I came across on one of my trips to the bookstore. I had no iota then on what it was but its title immediately piqued my curiosity. Unfortunately, it was left to gather dust on my bookshelf.

My completion of my 2017 Top 20 Reading List gave me opportunity to read other books, especially those that have been lying unread for quite some time. Thackeray’s classical work was the first one that came to mind even though I have other books that have been on my bookshelf longer. I delved on this classic is because I have been reading mostly contemporary fiction lately.

Vanity Fair chronicles the life of Amelia Sedley and Rebecca, two contrasting ladies whose fates were intertwined when they attended Miss Pinkerton’s school. The story follows their individual journeys after they left the school. Due to their different backgrounds, there is a disparity in their dispositions. Amelia is timid and soft-spoken while Becky is opinionated and outspoken. But in spite of this disparity, both characters, and all characters in the book for that matter, are all flawed. Amelia went back to the comforts of her old life while Becky went to be the governess of Sir Pitt Crawley’s daughters.

As the title suggested, the story is reminiscent of a stage play full of vanities where brazen and superficial virtues prevail. As such, it is anchored mostly on the values the characters possess. It is a novel that deals chiefly with people rather than events. All characters have good points but all of these are counterbalanced by their flaws. Instead of presenting characters’ as either purely black or white, everyone is possessed both positive and negative attributes. Nonetheless, you can love all characters but you can hate them as well.

At the early stages of the book, one might point out that Amelia Sedley is the proverbial hero in the story and that Rebecca Sharp as the anti-hero. Amelia is generally a good person but she refuses to stand up for herself, relying on those around her to make up her mind. Rebecca, on the other hand comes out as deceitful and mischievous. However, the revelation at the end of the book showed that Becky is capable of redemption. But with these brazen values, both of the principal and secondary characters, it is clear why Thackeray dubbed his magnus opus “a novel without a hero.”

However, it is palpable how the story tips favorably in Rebecca’s favor and that Amelia is nothing but an afterthought. The book could have easily been titled The Rise and Fall of Rebecca Sharp because of this imbalance in the narrative. I guess this is because she acts without any moral compunction. Moreover, Thackeray have already surmised that readers are drawn more into the villain more than with the goody two shoes.

Infused with this context of moral erosion is a satirical portrait of the high English society during the late 19th century. Contrary to what one would naturally expect, Vanity Fair exposed the other side of English society, outside the grandeur and the opulence. It is laced with hypocrisy and snobbish attitude. Those who force their way into the high society are frowned upon. Gambling and other vices are proliferating amongst this high society. Men of high position use their position to debase those of lesser birth.

Although Vanity Fair is book of morals, it is also a quintessential fairytale. The ending, especially that of Amelia’s fate, reeks of the “happily ever after” mantra that is a hallmark of the modern fairytales. Majority of the book depicts numerous hardships and misfortunes, in the end, it all got reversed as the fortune of the characters took a 360-degree turn. As a reader, I reckoned that this is a classic sample of ironing out all the ruffled feathers to appease the readers after all those negativities.

In comparison with its contemporaries, however, I found the story-telling mundane, too standard. It was told without any flare, rather, it was conveyed in a very straight manner. However, it didn’t in anyway affected the way the story was told. The dialogues came off too strong at some points because of the strong voice and language.

Every now and then, the narrator, who could possibly be the author himself, interjects himself at some points in the story. His sardonic description of the characters and their actions contributed to making the story interesting. But there is a glaring disparity on the way he portrayed human behavior. He generalized on the actions of women while he treated the actions of the men on an individual capacity. Some modern readers might find it distasteful.

Vanity Fair is a great way to start my 2018 reading year. The book reeks of the quintessential 19th century English novel. Although mostly tragic, the sudden turn of fortunes at the end makes the reader feel good about the book. The smooth pace made reading pleasant even though it is quite lengthy. William Thackeray wrote a great prose by building on human nature. The way he captured human behavior, morality and human motives is apt, profound and timeless.

Not recommended for those who are expecting exceptionally well-written novel and for the feminists. 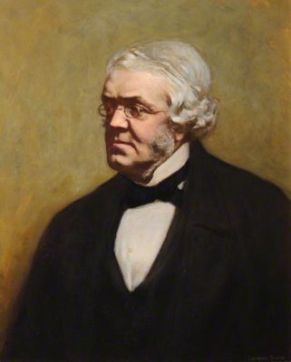 William Makepeace Thackeray was the only child of Richmond Thackeray and Anne Becher. He was born on July 18, 1811 in Calcutta, British India. His father’s untimely demise in 1815 caused his mother to send him to England in 1816.

In 1836, he married Isabella Gethin Shawe. Their union produced three daughters. To support his family, he turned to writing, beginning with journalism. He began with writing art criticism, and fictional sketches for Fraser’s magazine. He also did book reviews for The Times and wrote for The Morning Chronicle and The Foreign Quarterly Review. He published Snob Papers, which popularized the word “snob”, in the newly created Punch magazine.

After a bout of depression following his wife’s untimely demise, he published two travel books. The serialized Snob Papers brought fame to the fledgling author but it was Vanity Fair that gained him immense popularity. His famed work was followed by other several large novels, including Pendennis, The Newcomes and The History of Henry Esmond. To boot, he wrote these works in spite of several bouts of illness. Unfortunately, two days before the Christmas of 1863, he suffered stroke, and he was found dead the following day. His remains were laid down at the Kensal Green Cemetery.