Persepolis is the story of Satrapi’s unforgettable childhood and coming of age within a large and loving family in Tehran during the Islamic Revolution; of the contradictions between private life and public life in a country plagued by political upheaval; of her high school years in Vienna facing the trials of adolescence far from her family; of her homecoming–both sweet and terrible; and, finally, of her self-imposed exile from her beloved homeland. It is the chronicle of a girlhood and adolescence at once outrageous and familiar, a young life entwined with the history of her country yet filled with the universal trials and joys of growing up.

Marjane Satrapi’s Persepolis has piqued my curiosity so well because I keep encountering it on numerous must read challenge lists. Both the title and the book cover captivated me, and launched me on a local hunt for a copy of the book, which proved all for naught. No matter how hard I tried, it was a challenge availing a copy of the book. That was until my colleague found a copy online. As a favor, I asked her to purchase on my behalf. To say that I was a happy kid when I had the book is an understatement.

Even though I just received the book this year, I made it part of my 2018 Top 20 Reading List. In April, when I had my Asian literature month, the opportunity to read the book finally came. No words can express how elated I was when I began reading Persepolis. Thankfully, the book didn’t disappoint.

“When we’re afraid, we lose all sense of analysis and reflection. Our fear paralyzes us. Besides, fear has always been the driving force behind all dictators’ repression.” ~ Marjane Satrapi, The Complete Persepolis

Historically, Persepolis is the ancient name of Iran, the setting of the book. On the other hand, Persepolis the book, relates the life of a young Iranian woman, Marjane (Marji for short), as she grows up in one of Iran’s most tumultuous periods. It is a pseudo-biographical work illustrating the author’s coming-of-age from 1980 to 1994 in her native Iran. A significant portion of the book deals about Marji’s views and insights on the events that wrapped around Iran.

There are two aspects of the graphic novel that defined it from the onset. First, it is a historical novel that depicted several important events in Iranian history, particularly in the 1980s. Second, it is a coming-of-age story of the primary character. Both aspects are equally important in defining the book because it is not just your typical historical novel. Satrapi stretched it to a point of making the reading experience both a personal and an insightful journey.

Originally, the book was published in two parts, Part I: The Story of a Childhood and Part 2: The Story of Return. The first book relates the life of the 10-year old Marji. It mostly relates her views on the Islamic Revolution, the overthrow of the Shah and the rise of the Iranian regime. At the end of the first book, Marji was sent to Austria to study in a French school. The second book related Marji’s experiences at the French school until her return to Iran. It also deals on Marji’s views on Western culture and her pre-adolescent stage.

Satrapi’s out-of-the-box approach in writing the book is simply outstanding. By combining actual historical events and the Marji’s personal insights and views, Satrapi was able to elevate to book to what non-fiction books ought to be. This personal touch resulted into a more intimate reading experience. Moreover, Marji, the heroine is a well-developed character. She is likable, without the “sugar and spice and everything nice” tag. Her imperfections and her skewed views on some issues made her relatable. Her honesty and her bluntness  made the story more distinct.

One of the novel’s highest achievements is its candid rawness, especially Satrapi’s on-point portrayal of life. Using the point of view of a child growing up in a war torn country in relating the story was effective. The readers can easily relate to all the internal struggles Marji had. Moreover, she is unafraid of challenging the hypocrisies she witnessed. With the years, she matured and her puerile ramblings turned into more mature realizations. It is satisfying reading about Marji’s transformation from a rebellious teenager to a worldly young adult.

“I have always thought that if women’s hair posed so many problems, God would certainly have made us bald.” ~ Marjane Satrapi, The Complete Persepolis

Beyond the complexities of Iranian history, different facets of Iranian culture were incorporated in the book, making the story more interesting and insightful. As Iran is a Muslim country, the novel did not shy away from touching base with the sexist views of the Islamic religion. It is appalling to note that such sexist views still exist in today’s society, especially amongst the extremists and the fundamentalists. There are also several undercurrents on the fusion of Western culture into the Iranian culture.

The novel highlighted the horrors of living in a nation divided by war. But it wasn’t only the war that was dividing the country. The extreme fundamentalists and religious fanatics leading the country are causing a rift amongst its denizens. These fanatics suppressed everything that was above them, especially those who are against them and their religious views. Intellects were persecuted and schools are closed. Every able-bodied boy is sent to war. To live in Iran is to live precariously. In the same manner that Zusak’s The Book Thief does, Persepolis makes one reflect on the consequences of war, especially its effects on the younger ones. War is truly an ugly business.

Although Satrapi adopted a quicker pace in Persepolis, it ultimately made up for a pleasurable read. Its humor, wit and uncensored views on the events that took place in Iran gave a deeper insight on how it is to live in a country ruled over by radical individuals. The way everything was presented, including the graphic side, is astounding. Persepolis throws a wonderful light on graphic novels/comic books.

I am not a comic person but I enjoyed Persepolis a lot. It is a testament of how comic books can be powerful mediums in conveying stories. It is a masterfully crafted chef-d’œuvre. More than that, I love Marji’s growing up story. It is both interesting and insightful, both humorous and serious, both playful and thought-provoking. Its perfect mix of literary elements makes it a worthwhile read. Marji’s very distinct and individual voice ultimately redefined the story.

I highly recommend it for everyone who wants to try comics. It also makes me want to read the original, the French version. But I have to learn French first.

“I wanted to be an educated, liberated woman. And if the pursuit of knowledge meant getting cancer, so be it.” ~ Marjane Satrapi, The Complete Persepolis 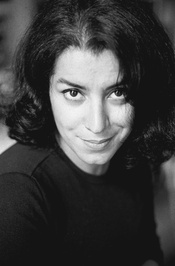 (Photo by Goodreads.Com)Marjane Satrapi was born on November 22, 1969 in Rasht, Iran. She was raised in Tehran by politically active parents. In 1983, she was sent by her parents to Vienna, Austria to avoid mishaps with the new laws concerning new codes for women. When she returned to Iran, she took up visual communication at the Islamic Azad University in Tehran.

Satrapi shot to fame in the early 2000s with the publication of her graphic novels, Persepolis (I to IV). Persepolis won the  Angoulême Coup de Coeur Award at the Angoulême International Comics Festival. The book was also adapted into an animated film of the same title. Her other works include Embroideries (2005), Chicken with Plums (2006), Monsters are Afraid of the Moon (2006) and The Sigh (2011). Aside from writing, Satrapi is also active in directing films and writing screenplays.

Satrapi is currently residing in Paris, France, with her husband, Mattias Ripa.