Mrs. Dalloway is the portrait of a single day in a woman’s life. Mrs. Clarissa Dalloway is preoccupied with the last-minute details of party preparation – fresh flower shopping, new dress buying, and festive room decorating. As she readies her house for friends and neighbors, memories flood her mind, and she is awash in the sensations of faraway times. Clarissa blissfully relives her carefree youth and early loves, stoically witnesses the approach and retreat of war’s grinding realities, carefully reexamines the solid reasons behind her practical marriage, and hesitantly looks ahead of the unfamiliar work of growing old. In this revelatory and experimental novel, the past, the present, and visions of the future melt together in each and every moment.

A famous line that I have heard so many times; it was only recently that I have learned that this line was from a play. I had heard of Virginia Woolf when I was younger but what I know of her was sketchy. When I learned that she was once a Pantheon of literature, I became impressed. Beyond being impressed, the mention of her name brought shivers down my spine; I never thought that the fear would be real (at least figuratively). An omnibus of her works I purchased four years ago remain untouched. However, if I truly want to immerse into the depths of literature, then I must learn to overcome this “fear”. And so I did.

“Mrs. Dalloway said she would buy the flowers herself.”

Thus, aptly commences one of the most distinguished and most recognized literary pieces of all times. I mean, who have never heard of Virginia Woolf’s tour de force, Mrs. Dalloway.

The titular Mrs. Dalloway is the 51-year-old Clarissa Dalloway, wife to Richard and mother to teenaged Elizabeth. Mrs. Dalloway was busy organizing a party she is going to host later in the day. It is Mrs. Dalloway’s innate desire to host parties “to cover the silence“. What was to be a busy day for her turned into a day of reflections, and ruminations – Mrs. Dalloway found herself in a place we often find ourselves in.

The opening line gives an inkling (partially) of what the novel is about, something that it is quite actually known for (although something that Woolf herself never intended it to be). On the surface, Mrs. Dalloway dwells on feminism, highlighting the role women play as the typical “light of the house”. Although Clarissa Dalloway conducts her role as a politician’s wife, this doesn’t hamper her from being able to express her personal thoughts.

But Mrs. Dalloway is more than just a feminist piece. Enter Septimus Warren Smith, a war veteran from the First World War. On the same day Mrs. Dalloway was organizing her soiree, Septimus was spending the day at the park with his wife. But there is more than meets the eye. Suffering from deferred traumatic stress, he is experiencing episodes of hallucinations which draw him back to memories surrounding his dear friend Evans who, unfortunately, died during the war.

A very important plot device is the constant stream of consciousness; it is critical in the appreciation of the prose. In a fluid flow of perceptions, the narrative floats from one memory to another, invoking an endless stream of one’s “continuous present”; Woolf delves into the tricks that our memory plays on us.

In vivid displays, different scenes reflect the momentary thoughts of the characters, such as Mrs. Dalloway’s flashbacks to her youth. Rather than invoking nostalgia, the picture frames evaluate the past while still being anchored in the present, and in the future.

The appreciation of simple things passing through the character’s mind are often associated to memory. The constancy of memory plays a pivotal role in the narrative’s exploration of other themes, especially existential crisis. However, rather than using explicit examples to highlight these existential issues, Woolf used private thoughts and perceptions to underline this subject.

One cannot also help but notice how the novel underlined issues on mental health and the inadequacy of society’s response to this issue. Septimus was a representation of the author herself; he was not part of the original manuscript. However, his story has several parallels to Woolf’s very own (past traumatic experience) – hallucinations, being admitted to different asylums, and even attempting to jump from the window.

Vividly depicted in the novel, postwar Britain’s society showed impartiality to mental disorders, often dismissing it. Rezia, Septimus’ wife, even remarked that his husband “was not ill”. Citing this as an example, Woolf emphasized how mental disorder is overshadowed by one’s cultural standards (the doctors didn’t believe Septimus). On a larger picture, this is also Woolf’s criticism on society’s class structure. Septimus, who Mrs. Dalloway have never heard of until the party, suddenly becomes the topic of idle chatter, hence, Mrs. Dalloway’s attention.

Virginia Woolf unfavorably views linear writing style chose to write a fragmented story, using constant stream of memories. This structural digression drew comparisons with James Joyce’s Ulysses. However, Woolf refuted these claims, saying that Mrs. Dalloway’s structure developed “without any conscious direction.” Woolf’s ability to disintegrate and reintegrate the different story elements is a spectacle, although one that readers might find challenging.

The story might have ended fragmented but playing with memory did have its advantages – the characters become more real as they get more intimate with the readers. Moreover, there was a fluidity to the flow of the narrative. The transitions were so subtle readers can barely notice them; that is a triumph of Woolf’s writing.

There was also a lyrical quality to Woolf;s prose; the novel displayed Woolf’s genius for language. Wonderfully constructed lines such as “What does the brain matter compared with the heart?”, “It is a thousand pities never to say what one feels,” “It was a silly, silly dream, being unhappy,” and “To love makes one solitary,” are abound. The philosophy behind most of these thought-provoking lines is truly fascinating. 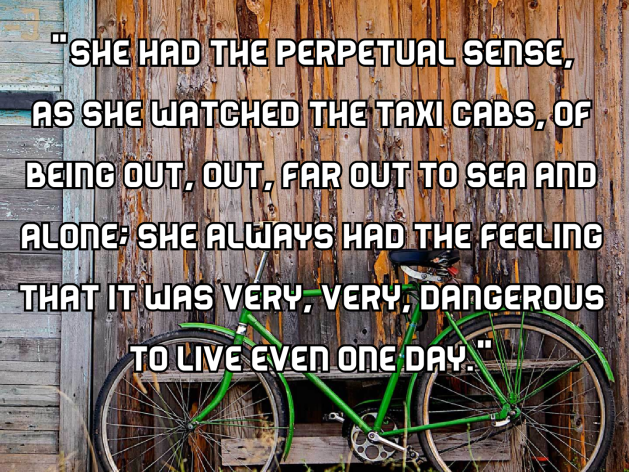 There is a certain level of difficulty when dealing with books that uses streams of consciousness as its primary plot device. Memory lingers and it is for naught that one battles with it. The fragmented storytelling might not be everyone’s cup of tea (including yours truly) but the intimacy of the character’s private thoughts brought out the beauty of the prose.

Most would view this classic as a revolutionary feminist piece. For me, its vivid depiction and portrayal of mental disorder and issues is what sets it apart, making the story more relatable and authentic. Moreover, In her own and creative way, Woolf uncannily gave readers a peek into her own troubled life.

Not recommended for readers who prefer linear writing.

(Photo by Encyclopedia Brittanica) Adeline Virginia Woolf nee Stephen was born on January 25, 1882 in South Kensington, London, United Kingdom. A pillar of literature, especially during the twentieth century, Virginia Woolf has carved quite the reputation amongst readers and her fellow authors.

From 1897 to 1901, she attended the Ladies’ Department of King’s College London, studying classics and history. It was in 1900 that she started writing professionally, encouraged largely by her father. In 1912, she married Leonard Woolf. The couple founded the Hogarth Press in 1917; it would later on publish much of Virginia’s work.

It was during the interwar period when Virginia Woolf rose to fame as an author, starting with the publication of her first novel, The Voyage Out in 1915, followed by Night and Day (1919) and Jacob’s Room (1922). Amongst her more popular works was Mrs. Dalloway (1925), To the Lighthouse (1927), and Orlando: A biography (1928). She also wrote short stories and have published a slew of short story collections. On non-fiction, she has published a biography, essays and essay collections.

But her success was often marred by her battles with mental disorder. Often thought to be suffering from bipolar disorder, her first recorded mental breakdown happened after her mother’s death; she was 13 then. Another extensive breakdown happened after her father’s death. It is widely believed that this mental disorder was the result of sexual abuse from her stepbrothers, starting when she was just six. The battle with mental disorder ultimately led to Woolf taking her own life on March 28, 1941.