If on a winter’s night a traveler turns out to be not one novel but ten, each with a different plot, style, ambience, and author, and each interrupted at a moment of suspense. Together they form a labyrinth of literatures, known and unknown, alive and extinct, through which two readers, a male and a female, pursue the story lines that intrigue them – and one another.

Italo Calvino’s If on a winter’s night a traveler has always been surrounded by a huge blurb that I can barely fathom. The number of readers trying to snatch every available copy of the book at the drop of the hat is, for me, a testament to its spellbinding effect. No longer able to contain my curiosity, I purchased a copy of the book and read it ahead of the other books that I have previously bought – my anticipation of the book is just too great!

“You are about to begin reading Italo Calvino’s new novel, If on a winter’s night a traveler. Relax. Concentrate. Dispel every other thought. Let the world around you fade.”

These are the opening lines of Calvino’s masterpiece, a stern caveat regarding his work. It is an unusual way of beginning a novel but the book is anything but the usual. This explicit warning immediately catches the attention and imagination of the readers. “Why am I being asked to focus? Shouldn’t that be implied? Why the patent warning?” asks the reader. Now If on a winter’s night a traveler has really caught your attention from the onset. You have the option to stop or to push through.

Those whose curiosity is too great chooses to push through. And they are in for a delightful reading experience. 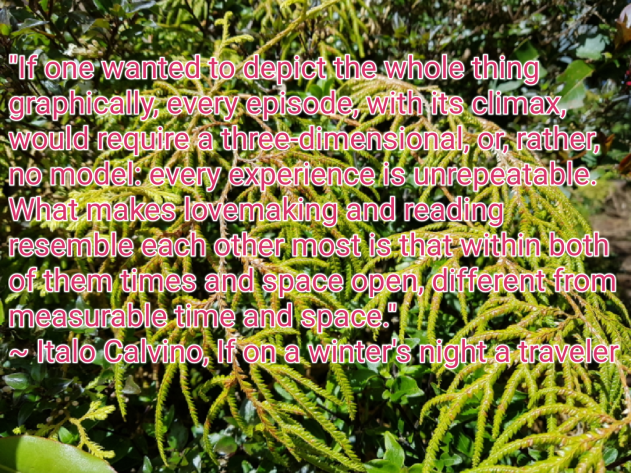 What’s very special about Calvino’s masterpiece is how it made the reader dance along the narrative. In a cunning fashion, he engaged his reader by making him the centripetal force that binds the story together. Italo Calvino’s If on a winter’s night a traveler is a book about a reader reading Italo Calvino’s latest work, If on a winter’s night a traveler. To most, it is a manifestation of writer’s narcissistic tendencies apropos their works. But to some, it is a clever manner of conveying a literary journey.

The reader is joined by a female reader, Ludmila. They both bought Calvino’s book but the book was broken and mixed up. The opening chapter was fine but the succeeding chapter was from another book. Both passionate readers, you and Ludmila are determined to finish the book you started. But to get to the end of the book there is a dizzying chase requiring amateur sleuthing skills. Bit by bit, you uncover not one, not two but ten different novels.

These ten novels have varying subjects and were written by different authors using different styles. These novels are interwoven into the novel’s twenty-two chapters. Their opening chapters were related in an alternating fashion together with the second-person narrative of the main story. Each novel is a pastiche imitating varying genres and writing styles. The Japanese novel was particularly striking with its uncanny imitation of Japanese culture and writing. You wouldn’t think that it was written by an Italian writer.

Deconstructionism is a tool which Calvino utilized aplenty in the story. He is such a tease, creating wonderful and believable opening chapters to ten unique but nonexistent novels. Just when you’re invested in the story, Calvino abruptly cuts it off, leaving the readers wanting more, albeit to no avail. In his unique way, Calvino cleverly showed how the most wonderful stories are those that are unwritten, the ones that are yet to be completed.

While each of these ten distinct novels have their own merits, the second-person narrative involving the main protagonists is evolving into a cohesive story. On their journey to unlock If on a winter’s night, the reader and Ludmila encountered other interesting characters, including Professor Uzzi-Tuzii, a professor of Cimmerian studies, and Lotaria, Ludmila’s sister, both of whom have their own contrasting ideas of how to proceed with the book.

The protagonists’ sleuthing also led them on the tracks of an international book-fraud conspiracy, a mischievous translator, a reclusive novelist, a collapsing publishing house, and several repressive governments. Cimmeria and Cimbria, two “fictional” countries and languages were also extensively dealt with in the book.

But the true brilliance of the novel lies not only it its unique plot. Its most brilliant facet is how it engaged the reader from start to finish. Calvino shrewdly steered and maneuvered the plot in a manner that the reader can identify with the main male protagonist. Well, the reader is the main male protagonist. Calvino created an enhanced reading experience, delving into the profound psyche of reading, making his novel a more insightful and more thought-provoking work.

If on a winter’s night a traveler is a marvelous reading experience. It is a book about books, albeit fictional, and nothing could be more interesting than that.  It is also a profound book about reading, writing, reading experiences and even ventures into the world of translation and publication. Although complex, it’s primary aim of taking the reader into a reading adventure is well-achieved. The biggest surprise though comes in the end. It is there that the essence of the ten novels can be fully grasped. But that is something for you to discover.

“We’re in a country where everything that can be falsified has been falsified: paintings in museums, gold ingots, bus tickets. The counterrevolution and the revolution fight with salvos of falsification: the result is that no one can be sure what is true and what is false, the political police simulate revolutionary actions and the revolutionaries disguise themselves as policemen.”

Although the book was published in 1979, the above-quoted line mirrors our current concerns on the purveyance of “fake news”.

To some extent, in spite of the novel’s overall brilliance, it can be very confusing. It is inevitable to slow down while reading the book in order for the reader to discern or appreciate the flow of the story. Calvino utilized too many elements in the mini-novels that it was a challenge trying to appreciate each one. The deconstruction was tedious. But then again, Calvino did issue a challenge at the start of the book – in order for you to appreciate the book, you have to focus.

Overall, in spite of its labyrinthine complexity, If on a winter’s night a traveler is a magnificent book. It is a rarity that beacons above the cream of the crop. It is a masterpiece of a book that captures both the heart and the imagination. Italo Calvino is a skilled storyteller and he showcased his brilliance in writing this book. He captured his reader’s imagination with his absurd prose. Although this is his first book that I have read, I am looking forward to reading the rest of his literary arsenal.

My two cents to those who wants to read the book, heed Calvino’s early warning. You will need more than focus to appreciate this masterpiece.

Not recommended for those who prefer uncomplicated, quick, and pleasurable reads, those who cannot fully focus on reading, those who dislike literary deconstructions, and those who don’t like reading and literary complications.

Italo Calvino was born on October 15, 1923 in a suburb of Havana, Cuba. However, he was raised in San Remo, Italy, and later lived in Turin, Paris, Rome, among others.

Before taking writing, he was once an agriculture student at the University of Turin and the University of Florence. He also entered the Italian Resistance and fought alongside the Garibaldi Brigades in the Maritime Alps for twenty months. After Liberation, he went back to Turin and became greatly involved with communist party activities. He got involved with left-wing intellectuals and writers and he later became a journalist for L’Unita, the official communist daily, and Rinascita, a communist political magazine. He officially left the Italian Communist Party in 1957.

The Path to the Nest of Spiders (1947) was his first novel. His other renowned novels include The Baron in the Trees (1957), Invisible Cities (1972), If on a winter’s night a traveler (1979) and Mr. Palomar (1983). He also wrote essays and short stories like The Crow Comes Last (1949) and Cosmicomics (1965). He did also help publish other Italian authors like Gianni Celati, Mario Rigoni Stern, and Andrea De Carlo.

He died in September 15, 1985 of cerebral hemorrhage at the ancient hospital of Santa Maria della Scala in Siena, Italy.