One of the most important works of twentieth-century American literature, Zora Neale Hurston’s beloved 1937 classic, Their Eyes Were Watching God, is an enduring Southern love story sparkling with wit, beauty, and heartfelt wisdom. Told in the captivating voice of a woman who refuses to live in sorrow, bitterness, fear, or foolish romantic dreams, it is the story of fair-skinned, fiercely independent Janie Crawford, and her evolving selfhood through three marriages and a life marked by poverty, trials, and purpose. A true literary wonder, Hurston’s masterwork remains as relevant and affecting today as when it was first published – perhaps the most widely read and highly regarded novel in the entire canon of African American literature

Back when Zora Neale Hurston’s Their Eyes Were Watching God was sold in the book stands in 1937, African-American feminist movement was still in its infancy. The general feminist movement was already gathering steam from all sectors, including literature. However, the African-American women’s story is yet to be heard. An array of other issues caused the movement to be pushed back. Unfortunately, Hurston’s book failed to create the stir that it did in the contemporary period as back then, the world was still rousing from its aged slumber on such sensitive and libertarian subjects such as feminism.

In 1936, Hurston surprised everyone when she unexpectedly moved to Haiti. It was during this period that she wrote her magnum opus in seven weeks. The speed by which she completed her novel earned the admiration, awe and praise of writers all over the world, and even a simple spectator is astounded by this feat. According to several accounts, this period in Hurston’s life is emotionally charged, probably contributing to the haste by which she brought life to Janie’s story. I, on my part, purchased the book because of my burgeoning curiosity. To make it even more special, I included the book in My 2018 Top 20 Reading List.

“Love is lak de sea. It’s uh movin’ thing, but still and all, it takes its shape from de shore it meets, and it’s different with every shore.” ~ Zora Neale Hurston, Their Eyes Were Watching God

Janie Crawford, the book’s primary heroine, grew up with her domineering grandmother, Nanny, who schooled her with the doctrines and dogmas of African-American life. Her fair-skin and strong liberal views distinguishes her from the common African-American woman. Janie adamantly formed her own ideas which she followed through with. Their Eyes Were Watching God extensively dealt with Janie’s marriages; first with Logan Killicks, followed by her marriage to Jody “Joe” Starks and finally to Tea Cake. Through her marriages, Hurston delivered a myriad of insights on life, love, marriage, and ultimately life which is applicable not only to African-Americans but to everyone.

This laconically written tale is filled with numerous themes when described in one word would relate to “women”. One of the things that Nanny has ingrained in Janie’s young mind is that women should marry not for love but for protection. Gender roles is one of the theme discussed in the story. The narrative explored the traditional roles of women. Such was exemplified in Janie’s first two marriages. Her marriage to Killicks, arranged by Nanny, was for convenience. In her marriage to Starks, on the other hand, Janie was treated like a trophy life, an object paraded over town to pave Stark’s reputation all over the town.

In line with the gender stereotypes, the book vividly portrayed the significance of women, especially African-American women, in marriages and in the society as a whole. With every marriage Janie had, Hurston underlined how undervalued women are in marital relationships, and even society. But while Janie is scampering from one failed relationship to another, Janie is trying to find the voice to express her story. At times people around her tried to silence it but in the end, she was able to find the voice to spoke through the din and recount her story.

The narrative’s biggest theme is the liberation of women. Because of gender roles, which is more common all over the world than we originally think, women are relegated to roles that men have set for them. However, Janie fought against these prejudices. When she learned that she was just a trophy wife, she did all she can to fight against the mold. When everyone was judging her turned a blind eye. When everyone was questioning her choices, she proudly kept on. She proved to everyone that she is a woman who is the master of her own life, a woman who is free to choose what she wants and then suffer the consequences from it. Just like all of us, she made these choices and stood by them.

African-Americans were long subjected to racial discrimination and for the African-American women, it was doubly hard because of the gender stereotypes. When reading a novel set in the Deep South, one cannot avoid the subject of racial discrimination because it has long been inculcated into their consciousness. This inescapable subject is still common among contemporary writers who tend to highlight the glaring disparity between the white and the colored races. Take Tayari Jones’ An American Marriage (2018) or Sue Monk Kidd’s The Secret Life of Bees for instance.

Their Eyes Were Watching God is the quintessence of the perfect combination of African-American fiction and feminist fiction. It is in these themes that Hurston was overwhelmingly successful. The synergy of failed marriages, violence against women and gender stereotype added up to an engaging and interesting read. Although the book did not earn the praise it justly deserved when it was initially published, it can take comfort in the fact that the present is responding to the ideals that Hurston have espoused through her novel.

Thanks to the liberation of literature, books like Their Eyes Were Watching God, which were highly controversial during their initial publication, have earned the recognition they needed. Janie’s tale is ubiquitous but one that is rarely talked about but everybody is cognizant that it is there. Hurston did a very commendable job in writing and depicting Janie’s stormy life. The narrative is eye-opening and very insightful.

But again, no read goes without a challenge. The biggest challenge in reading and appreciating the book is its usage of the colloquial, the very same approach used in Alice Walker’s The Color Purple and William Faulkner’s The Sound and the Fury. Although it gave the book authenticity, it posed a challenge to non-native English speakers. Fortunately, the two aforementioned books have prepared me with Hurston’s colloquial. It didn’t bother me as much because the writing was diaphanous, flowing seamlessly.

“So she sat on the porch and watched the moon rise. Soon its amber fluid was drenching the earth, and quenching the thirst of the day.” ~ Zora Neale Hurston, Their Eyes Were Watching God

It is always a pleasure to read classical works, especially ones that are toasts of their time and period. Their Eyes Were Watching God is no exception, more so because of its profound yet bold message that still resonates today. This bold message will certainly speak volumes for generations to come. Her wonderfully crafted masterpiece is a literary piece to behold. Yes, the book is bleak and could be a challenging read but in the end, it is one that is rewarding, if only one is up to the challenge.

Recommended for avid readers of African-American literature, fans of Alice Walker’s writings, readers who are into the feminist movement and books about women in general, women who have been through rough patches, women who are looking for inspiration and readers who have liberal minds.

Not recommended for readers with very conservative and closed ideals, those who have no interest in history, in feminism or in African-American literature, and for the Joe Starks of the world. 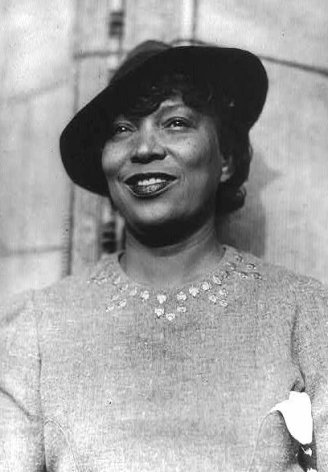 (Photo by Wikipedia) Born on January 7, 1891 in Notasulga, Alabama, Zora Neale Hurston was the fifth child of eight children to a carpenter father and a former schoolteacher mother.

From 1919 to 1924, Hurston attended Howard University in Washington, D.C. In 1921, she published her first story John Redding Goes to Sea, in the Stylus, `the magazine of the Howard University literary society. This was followed by more short stories like Drenched in Light (1924), Muttsy (1926) and Possum or Pig (1926). From 1925 to 1927, she attended Barnard College to study anthropology. Hurston’s debut novel, Jonah’s Gourd Vine was published in 1934, followed by her most notable work, Their Eyes Were Watching God (1937). Aside from fiction, she also published several non-fiction works such as Mules and Men (1935), and Dust Tracks on a Road (an autobiography)(1942).

Aside from her literary activities, Hurston also established a school of dramatic arts at Bethune-Cookman University, a historically black university. She also served on the faculty of the North Carolina College for Negroes (now North Carolina Central University). She was also active in anthropological and folkloric works.

Hurston passed away on January 28, 1960 due to hypertensive heart disease.

3 thoughts on “Book Review # 68: Their Eyes Were Watching God”